Crucian Campaign comes to an end. 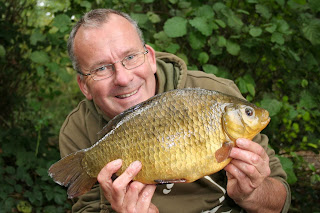 Crucian Campaign comes to an end.
Well due to this unseasonal mild weather the crucian fishing at Johnson’s has continued rather later than expected. In fact the crucians are still feeding now as my father tempted three in a morning session on Monday, yet they are becoming harder to tempt and it’s easy to see that for every good day, a couple or more bad days will follow and before long they will be no longer worth targeting.

It’s now barbel time for me and all my efforts will be focused on these along with the odd grayling day thrown in for good measure. Looking back at the crucian season it’s amazing how things change from year to year. Last year the crucians could be tempted right in close but this year they have rarely ventured in this close. Thirty to fifty yards has been more productive and the big hits of the past have been rare as the fish seem to be far wider spread. Something else that has changed is where the first few hours of darkness have been best in the past, this year it’s all happened in the morning, late morning in fact with darkness seeing the lake die.

I’ve also enjoyed moving around the lake and fishing swims that I have never fished before. The reason for this is that it’s been noticeable how the fish have either followed the wind or in fact, areas of the lake where the wind is blowing into have fished well. I worked on the principle that if I hadn’t caught in three hours then it was time to move and it was a tactic that paid me back on most occasions.

It seems that I have fished Johnsons far more than the 19 visits listed and these sessions have usually lasted around six hours and I’ve averaged two three pound plus crucians per visit. Back in May I noticed that four sessions had produced 9 crucians, 2 carp and 51 tench! The most tench caught in six hours was 28 with the biggest 8lb 9oz and the best haul of crucians was 7. In total 39 three pound plus crucians graced my net along with probably 25 two’s. My best crucians was 4lb 4oz, the same fish that broke the British record when spawned up and one that provided myself with a new personal best by half an ounce! Many of the three pounders were big three’s, 3lb 11oz – 3lb 13oz and it was brilliant to know that my fishing mate Chris had set a target of 3lb 12oz and achieved this late in Sept. Personal best seem to fall to most that fished, Steve Double a customer managed a 3lb 13oz, Aaron only recently had a 3lb 12oz, Dad had one of 3lb 14oz and my brother one of 4lb 2oz so all in all a fantastic relaxed campaign and one that I have toughly enjoyed.