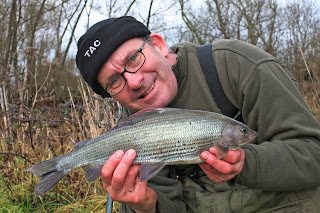 Make a date and have some fun with the ladies.

The coldest night of the winter has just covered the countryside in millions of tiny ice particles. Thousands of stars glisten in a cloudless sky and as darkness turns to light and illuminates the fields your footsteps are the first to be left behind. A small handful of bait followed by your float lands on a watery surface surrounded in a ghostly mist, then moments later it’s gone. Lifting the rod the blank takes on an alarming curve as a powerful fish shakes its head before powering off downstream in an attempt to rid the hook. All sounds a bit surreal, yet such an experience is there for every angler in this country to experience and I urge each and every one of you to make a date and book a day this winter on a chalk stream full of grayling.

For many the two most likely points to put you off is initially cost and then the knowledge of how to catch. Well the good news is firstly it doesn’t have to cost you an arm and a leg and secondly, grayling are extremely easy to catch and even the clumsiest of anglers can expect to trot a float down a river and catch. 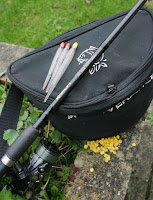 The two beats that initially come to mind are Timsbury Manor Fishery (www.timsburyfishing.co.uk)on the Test which costs just £20 and The Lower Itchen Fishery (www.itchen-fishery.co.uk) that costs £25.50. Compare this with most carp orientated day ticket venues where you can expect to pay around £15 per day and then on top of this take maybe a kilo of boilies or a bag of groundbait and cost wise things start to even out, especially when you take into consideration that a tin of sweetcorn costing maybe 50p is all you need for a days grayling fishing! On the downside to get to these exclusive, sorry that’s the wrong word, open-to-all fisheries will to most mean travelling some distance compared with their doorstep carp infested day ticket water so its best to team up with a couple of mates to share the cost. For the club angler that rarely heads to a day ticket water then it does cost somewhat more but its not something that you have to do that often, once, twice or like myself maybe three times a year but believe me get the conditions right, and in Jan and Feb they usually are and this odd trip will be an experience that will see you making it a yearly pilgrimage. And it’s worth doing some homework as there are a few free stretches and beats available on a club ticket yet these are often more pressurised and not as productive, yet they do hold the occasional big fish.

So what about tackle?

To get the best from the river and to experience them as they should be then you will need to take a float rod. Yes, you can just sit in a swim, cast out a feeder and probably catch but it’s not something that I would recommend as grayling have a tendency to swallow a bait and are very fragile, often needing to be nursed back to recovery. Without a doubt a centrepin will create far better float control yet I used a fixed spool for years and caught loads of grayling before being converted. Fining down with end tackle also isn’t something that’s required and a chubber style float will in the early days be better than a more conventional stick as it will allow you to control the swim better. Reel mainline in the 4lb region and a size 14 hook will provide you with plenty of bites, so as you can see catching isn’t exactly rocket science here.

Theirs no sitting and waiting when grayling fishing so leave the chair at home, travel as light as possible and keep on the move and invest in a bait waiter as this allows you to stand, feed and fish.

Feeding is simple, throw out maybe half a dozen pieces of corn followed by your float. In most swims this will all that will be needed to get a bite as grayling are like mini sharks, zooming in and grabbing the bait at any depth and anywhere in the swim so pinpoint accuracy is rarely required. Obviously a finely tuned stick float angler will buy a few more bites but for the novice finesse isn’t needed to have a great day.
Although grayling can be the easiest fish of all to catch, just like chub once a few of their mates have been caught from a shoal then they will become the hardest of all to catch so once bites dry up its time to move on.
When it comes to what makes a good swim, well there are no hard and fast rules with grayling as they can vary considerably over a beat. I’ve had some remarkable catches from swims that are only inches deep, ones that most would walk straight pass yet long straight runs of even depth are probably the most productive and enjoyable to fish as an angler can let the float travel often many yards and adapt a technique called long trotting. Horseshoe bends often contain plenty of fish as can depressions in the river bed, so as you can see every inch of a river needs to be explored if you are to get the best from it.

Catching a two-pound grayling is your target on such a venue mentioned yet one massive mistake made by most on hooking a big grayling is to try and bring it to them. In many cases the force put on the hookpoint in a bony mouth will end in disaster, so my advice is if it’s a big fish them slowly move downstream to the fish and try and get level with it, from then on its pretty much game over.

Grayling are sight feeders so ideally you need to arrange your trip to coincide with cold dry weather when the river is running at its clearest. This is the downside of booking a date in advance as if a couple of nights of heavy rain precedes your trip and colours the water up then catching grayling becomes difficult, however the good news is that most beats also contain chub and roach so if this does happen the float rod can be swapped with a quivertip rod and the corn swapped with a loaf of bread and with trout around whatever the conditions you will still find plenty of action.