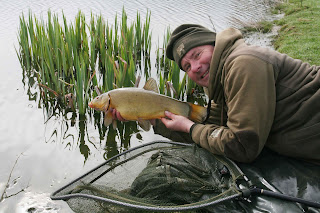 DAY – TICKET TACTICS
Specimen angler, Duncan Charman, visits a different day-ticket venue each month and explains how he gets the best out of his session. This month he reveals a tactic used by match anglers to take commercial carp venues apart and one that he has been quietly experimenting with startling results.

I’m not sure exactly the date when I first starting using trout pellets but it has to be thirty years ago. Back then I was the first to get my hands on a packet and start using them during my local club matches. Top weights in these matches before the introduction of pellets rarely exceeded 20lb however this new wonder bait sent my match weights through the roof, often exceeding 45lb! Back then the variety of pellets was limited, however fast forward three decades and well, tackle shops shelves are more like sweet shops and lakes all over the country have been simply bombarded with them, making pellet the most productive and consistent bait available today.

Not just cheap compared to maggots and boilies, pellets are also a very versatile bait and the most commonly used methods that I see on most day ticket venues, and so do the fish, has to be a PVA bag filled with them. As many readers will know, I rarely use PVA, one reason is its expensive and the other is in most cases theirs a much more effective way of presenting your bait without it. The introduction of the flat-bed feeder revolutionised pellet fishing for a while and is still producing the goods now, and although I have started to use this method more, still find it somewhat frustrating. The main reason is that the groundbait or pellets placed with the mould has to be mixed perfectly, otherwise it just breaks up on release the mould, in mid air or on impact with the water. Finding a solution to this and one that’s far simpler to use has to be a winner especially if it can place my hookbait right where I want it, around my loose feed, so when I was told about the pellet cones I just had to get one and give it a go.

The obvious answer was to take it somewhere such as Gold Valley Lakes, a day ticket venue on my doorstep and full of carp, yet to really get a feel for the method and to see just how brilliant it is, I needed a venue that was somewhat harder and held few if any carp. Around the same time a friend of mine had mentioned how he and his dad had caught a ridiculous amount of tench and crucians from Harris Lake on the Marsh Farm Complex using such a device, so with the venue chosen it was time to put it into practice. Luckily Nash Tackle had also bought out their Ballmaker Pellets which had already solved consistency problems when using the flat bed feeder and pellet-lead methods and I knew instantly that I had a winning combination. That first session on the lake was a real eye opener. Whilst others around fished feeders up against the island or placed delicate pole floats in the margins and struggled I cast a small free-running lead, short hooklink with a piece of corn hair-rigged next to a sixteen hook out and constantly caught all day. In fact using two rods became somewhat of a joke as tench after tench graced my net along with a few crucians thrown in for variety.

Since that session I have visited numerous different day ticket and club venues and every time the pellet cone approach has been a winner. In fact the method has proved so effective that I kept it quiet until now but felt that this series of articles was the perfect place to reveal one of my secrets. Most if not all match anglers will be shaking their heads saying, the pellet cone, that’s no secret, yet I not expecting that many match anglers, unless they are clever ones looking at finding a few edges and tricks up their sleeves to be reading my article, however I am expecting a lot of club and day-ticket anglers to be reading this, one’s that head to their local lake with carp on their minds. My point here is, I learn loads from the match anglers and read their articles regularly to keep up with the times so pretty much keep in touch with the latest tricks and edges and it’s these methods that will score on the majority of venues across the country.

Pellet cones come in all shapes and sizes with the most common style being the bright coloured ones in which dampened pellets are compressed before an angler draws his hooklink through using a baiting needle. This was my starting point however I now use a Quick Cone as it’s far simpler to use and I can even place small micro pellets around a hookbait, similar to an earlier article where I used the Nash Ballmaker to encapsulate a bait before dropping it in a river to catch barbel. Forget about carp rods and heavy lines, this tactic, as all of mine do requires balanced tackle, 1.25lb – 1.75lb t/c rods and 6lb or 8lb mainlines. When fishing on less populated lakes I will use a running 1.1oz inline lead, however if I’m expecting loads of bites and casting frequently a small half ounce running lead will be all that’s required. On both set ups I place a small float stop an inch behind the lead, the reason for this is it allows me to see liners from fish browsing around the small pile of pellets yet creates a bolt effect when a fish sucks in my bait. Hooklink in most cases is made from Fluorocarbon in a breaking strain around 6lb and the hook that’s as reliable as any is the good old faithful Super Specialist in a size 16 or 14 depending on hookbait size. Some anglers prefer to use a bait band and mount a hard pellet next to the hook, yet I’m not a great lover of bait-bands and prefer the versatility of a hair to mount my hookbait.

One major advantage of using a pellet cone over a flat-bed feeder is the speed in which a bait can be cast back out into the swim. This is achieved by incorporating a quick-change bead and having a spare hooklink baited up and ready to go. After landing a fish it’s a simple case of releasing the existing hooklink and connecting the ready made one up on and casting out. It might only save you a few seconds but over the course of a day, and especially when the fish are feeding it can and will put quite a few more fish in your landing net.

So here’s a massive piece of advice if you are an angler that wants to catch carp, fish’s commercials, even relatively difficult club lakes and often buys a carp magazine. The tactics shown within these magazines are often over complicated and designed to outwit carp that have seen it all. Ask yourself the question, am I fishing such a venue? The answer will probably be no, so every now and again buy a match style magazine or even subscribe to Coarse Angling Today as this is where you will see the tactics that will catch fish on your lakes.

Images
1 – Tench, absolute suckers for a sweetcorn hookbait next to micro pellets.
2 – Quick Cone devices are easier to use and Fluorocarbon, excellent for line concealment.
3 – The pellet cone works at Mill Farm Fishery too.
4 – Sweetcorn, the best hookbait by far.
5 – Standard pellet cones, a good starting point.

6 – Constant action from carp like this would make any anglers day, so why aren’t you using a pellet cone?
7 – It pays to have a few tricks up your sleeve when targeting massive fish like this crucian.

2 – Half fill the Quick Cone with micro pellets (I like to press these down slightly).
3 – Place your hooklink through the slots.
4 – Fill the cone to the top.

5 – Press down and fill again. The firmer the mix the further the cast but then the longer it will take to breakdown.
6 – Press the release buttons.
7 – The finished article.
8 – The rig I use when expecting loads of bites.