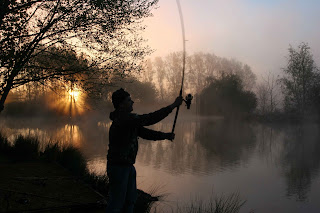 What makes article writing so rewarding is when you know other anglers have read and taken on board the tactics described then taken them to their local fisheries and found success. I know one angler that’s now obsessed with float fishing prawns, everywhere he goes its prawn on the hook but what’s different about John is that he catches everything that swims, wherever he goes and always returns home a happy man. I watched another angler last week also using prawns, yet he was ledgering these with no alarms, just centerpin reels and old rods and did he catch, oh yes.

Sadly though it’s common to witness anglers that are over-gunned using big rods, reels and heavy lines on venues that respond so much better when every thing is scaled down. These anglers seem reluctant to want to catch plenty of, what must be to them unwanted species, even if this means catching far more of their target species, carp! All the gear and absolutely no idea comes to mind, but what makes it more frustrating is many are happy to cast out, catch next to nothing and if their not asleep watch as anglers like myself get constantly beaten up by what would give them what’s known as a called red-letter day. Unfortunately I can’t educate every angler out there to take a serious look at their approach and tackle as many are just happy to be there away from their hectic lives, to relax and maybe hear an alarm sound, however if this is ringing any bells for you and you want to increase your catch rate then read on, as here are a few tactical tips for you to try next time you venture out.

I have to admit that I’m not a great lover of using the flat-bed feeder much preferring to use what’s known as the groundbait or pellet lead, yet on a recent visit to Godalming’s Harris Lake I was faced with extremely clear water, clarity which meant that catching under the rod tip wasn’t going to happen, well not in daylight. In the car I always have a small bag that’s filled with lots of spare fishing items such as flatbed feeders, it comes in very handy on many sessions when I have to revert to another method and with a ruling stating that all rigs must be running, which rules out the helicopter rig, it was time to put these into action. My thoughts were that the fish would be out close to the islands, not right under the overhanging foliage but at the base of the drop-off and after a couple of casts I found this to be around a rod length from it. A small dash of Nash Spot-On painted onto the line just off the reels marked the spot, however I was hoping that I wouldn’t have to unclip as each hooked fished would probably head left or right and even if one did head towards the island their would be enough stretch in the mainline to cope with this. The height of the bank sticks were adjusted so the tips of the rods just touched the lake surface, a fantastic way of revealing liners which mean fish in the swim.

For bait I very rarely if ever get stereotyped into one approach. I will always have an idea on what will work best yet when tench and crucians are my target only taking one bait can be disastrous as these can show a preference that changes daily. My first approach was to fish Nash 2mm Ballmaker pellets on the feeder with the smallest grain of corn that had been soaked in sweetener. This would be hair-rigged next to a size 16 hook and placed in the mould before the pellets so it sat right on top. My other rod would see a 6mm punched piece of corn stick (a bait that’s been catching me loads of fish of late) hair-rigged in the same way but this time placed on top of Old Ghost Krill Groundbait that had been mixed up, as had the pellets before leaving home.

My Fox Kevlar Barbel rods, won many years ago in Coarse Angling Today’s ‘Where’s the Catch’ competition, with the 1.25lb T/C tips added, along with Shimano 4000 reels loaded with Gardner 6lb HydroFlo and short three inch Reflo 4.12lb hooklinks completed the set up which seemed balanced enough for the crucians but more than capable of taming one of the lakes bigger tench should it show.

My session only lasted three hours during which time five tench to nearly six pound graced my net along with three crucians to a shade over 2lb. Other anglers around were struggling, the odd tench if they were lucky but what made the difference was I kept casting every ten minutes as well as leaving the line in the reels line clip, something others just weren’t doing. What method worked best, well the corn over pellet had the edge just and seemed to be what the crucians preferred.

The Specimen Lake at Mill Farm Fishery is one of the lakes where carp anglers seem intent on using tackle well over-gunned when simplifying things and using smaller baits will see their alarms constantly sounding. I love the venue as not only does it provide the outside chance of a British Record silver bream but its one of those venues that catching a 100lb of fish can be achieved when its fishing badly, well that’s if its approached correctly.

The method I use on this venue is the helicopter rig however the flat-bed feeder will also catch plenty of fish as my friend Paul Garner showed on a recent session. Casting towards the islands seems the way forward if it’s a big silver you’re after however this is also an area the carp love as well. Rods are as previously mentioned yet with carp to over 20lb likely to be hooked my mainline is increased to 8lb. On the end of this a 1oz cage feeder is attached and a few inched behind this a three inch hooklink is attached and locked in place using a couple of float stops. The hooklink is made from Wychwood Truefly 6lb fluorocarbon with a size 16 hook attached knotless knot style and a Nash tapered sleeve placed over the swivel that acts as a boom and reduces tangles.

Groundbait is banned here so in the feeder I press 2mm Nash Crab and Krill Ballmaker pellets and for hookbait its either a small 6mm pellet, a piece of corn or a punched piece of Old Ghost Corn Stick. All these baits have their day so when starting a session keep your options open and try them all.

Although Spot-On is great for marking lines when I’m casting up against an island at some distance I like to use a stop-knot made from pole elastic. This is tied just of the rod top and when the feeder is in flight makes a noise through the rod rings which is the time to drop the rod from a vertical position to a horizontal one allowing the feeder to drop on the same spot every time. Regular casting is the key once again in catching, every ten minutes is a good starting point yet once the fish arrive expect to cast far more often than this and be prepared to hook plenty of carp. I’ve had them to over 20lb here so when one is hooked just take your time as bullying them will just see you having to tie a new hooklink.

Over the next month I’m hoping to get out and catch a few big tench on the waggler and with the water warming up will be spending some time targeting carp off the surface so until then I hope you try the above methods as they will catch you loads of extra fish wherever you take them.

Images –
1. Having your rods already made up allows you to arrive and get them out at the best time of the day, dawn.
2. Harris isn’t the easiest place especially when the water is clear and the suns up but you still should be able to catch plenty.
3. Place the rod tips in the water and watch. You will be amazed what they show up.
4. The components needed to fish the flat-bed feeder.
5. Keep your options open.
6. Place your hookbait within the mould first.

7. The end product but what one will work best?
8. Duncan bent into a good carp.
9. Crab and Krill Pellets through the feeder along with a choice of hookbaits.
10. The helicopter rig, simply devastating.
11. Sometimes I prefer a stop knot as a distance reference marker.
12. Mill Farm not just a carp and silver bream venue.
13. A night session on a day ticket venue produced this near 20lb common and was taken on the helicopter rig as mentioned.
14. My mate Chris with a big perch from Mill Farm Fishery and again on the helicopter rig.