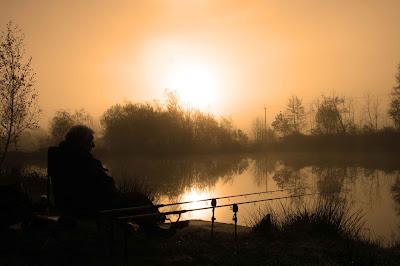 DAY – TICKET TACTICS
Specimen angler, Duncan Charman, visits a different day-ticket venue each month and explains how he gets the best out of his session. This month he shows how scaled down carp rigs can outwit spring tench.

I’ve always said that if you want to take a venue apart then you need to take risks. Taking risks such as applying the mass maggot approach to a boilie orientated venue is all well and good for the angler who has plenty of time to experiment, however for the angler with limited time they often have to go with the flow and adopt a similar approach to others. This is all well and good and will see a few fish landed, yet by fine tuning rigs and scaling down on hook and bait size will not only see your chosen quarry slip up but it will keep you active from other species such as tench. 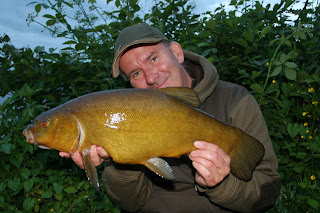 Last spring I noticed on a local day ticket venue two types of angler, carp and match. The carp anglers used big baits and rigs designed to avoid the tench and the match anglers adopted a feeder and maggot approach that saw plenty of skimmers taken. The tench, although caught or lost occasionally were just getting away with a free meal so I decided to adopt a more specialist approach in the hope that it would unlocked the lakes tench potential.

I knew a heavy baiting approach would simply drag every bream in the venue into my swim so decided to adopt a PVA stick approach and instead of casting these into the middle of the lake, simply underarm cast them so they landed at the base of the marginal drop off. Bream in general like open water and rarely venture this close in, however carp as well as tench love patrolling these areas so I knew that when the alarm sounded the chances of it being from either of these was high. Arriving early so that I was fishing as the sun came up was the best time for tench and having made plenty of PVA sticks at home as well as using a hooklink system that allowed new ones to be threaded on quickly made these sessions so effortless and productive.

Being a great lover of running rigs doesn’t always mean it’s the best approach, especially for tench that can be very subtle feeders, so after some experiments it soon became apparent that a bolt rig was the way forward. Coupled with a short hooklink it was obvious that the weight of the lead was helping to set the hook better, and soon these frustrating feeders began to find the bottom of my landing net. Normally I would be happy to get liners and taps on the rod tips that’s accustomed to using running leads, however with bolt rigs I had to get used to sitting in silence, waiting for the tip to fly round in more barbel style and the alarm to scream.

The final rig consisted of a 2oz inline pear and behind this I pinned my 10lb mainline down using a couple of Nash Tungsten Clingers. My hooklinks were short, around six inches and created from 15lb Combilink which was completely stripped of its outer coating. Onto this I attached a strong sharp size 10 Fang X hook tied knotless-knot style and at the other end I tied a loop. This loop connects to a Quick Change Rig Swivel attached to my mainline and in turn is covered with a tapered sleeve. Hookbait was an 8mm punch boilie segment; pellet shaped and tipped of with a small piece of buoyant corn. The corn not only acted as a sight stop but also gave the hookbait buoyancy so that it would fly into a fish’s mouth far easier. Its worth experimenting with braid and Fluorocarbon, even mono as a hooklink material does make all the difference on some waters. Even though the sight stop out-fishes standard bottom bait on most waters its worth starting off using one on each rod as like the hooklink it can make a massive difference.

Last spring I made my own stick mix that consisted of pellets and boilie crush, however this year I can’t wait to use Nash Key boilies, paste and stick mix as not only has the bait already proved its worth for winter chub but the pre-mixed stick mix will just make my life even easier. The sticks I use are around two inches long and I add a couple of hookbait samples into each and pre-tie a couple of dozen prior to each session which is more than enough even if the fish are going made. Instead of baiting the swim with groundbait or firing in boilies I prefer to build the swim slowly so cast every thirty minutes with a new PVA stick, clipped up to hit the same mark, even at such close quarters. If its possible to fish the same swim or rotate a couple on regular basis then this is good as once the fish become accustomed to the bait going in, sessions should get better and better, so don’t expect big hits from the off and be happy with a tench or two from those first few early visits.

One massive mistake many anglers make is that they think that the bigger the bait used the bigger the fish caught and seem blinkered on casting out an 18mm boilie, especially if bream are in the water. However I always do things in reverse and start off with a tiny bait, one as small as 6mm. If I get bombarded with small fish like roach and skimmers then I will increase the size of this, to an 8mm, then 10mm until they stop pestering me. In all honesty I rarely use a bait bigger than 10mm as I know that a 30lb carp will readily pick this up and any nuisance fish wont. Ok if you’re a carp angler you may have to put up with catching lots of biggish tench and bream but it’s only a matter of time before a carp or two move in and as long as you pay attention to your tackle and balanced this out then theirs absolutely no reason why everything hooked shouldn’t be landed.

So next time you head to your local fishery, try your standard approach on one rod but with the other try getting into the habit of experimenting. If your target are tench, then you may well have to forget about the more traditional methods and turn your thoughts to scaled down carp rigs, as on the right water they can be absolutely devastating.

1 – Dawn is often the best time for tench.
2 – Never ignore the margins for early season tench.
3 – Small baits don’t mean small fish.
4 – Save time by making plenty of PVA sticks up at home.
5 – Experimenting with hooklink materials is important.

Sequence
1 – A punched boilie that’s then cut in half that’s got a sight stop and then mounted next to a size 10 hook is a brilliant bait on all waters for tench and carp.
2 – Thread a two-inch PVA stick onto the hooklink then pull down towards the hook but ensure that the point is away from the knot.
3 – The Key Stick Mix is ideal as its fine and has no soft particles for the hook point to become covered in once the hook is pulled into the PVA stick.
4 – I prefer bolt rigs now for tench and use a 2oz inline lead and attach a Quick Change Rig Swivel to the end of my mainline.
5 – Once pulled in the lead attaché the hooklink and pull into the lead.
6 – Remember to place a tapered sleeve onto the hooklink after threading the PVA bag on.
7 – Pull this over the part of the swivel containing the hooklink for a secure fix.
8 – The finished rig containing PVA bag. Tangle free and devastating.
Posted by Unknown at 08:56