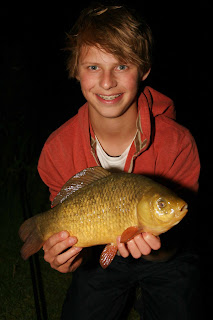 It’s been a while since l caught up with Ollie. Back in the winter we had spent frustrating day perch fishing and with nothing to show for our efforts and thought it was only fair to promise him a days crucian fishing come the summer.

August is a great time to catch numbers of fish at the famous Harris Lake on the Marsh Farm Complex so we arranged to meet in the car park at 6pm with the view of fishing till midnight. Luckily the weather stayed dry and setting up on the railway bank using free running inline leads covered in Sonubaits Super Crush Green and tiny pieces of corn hair rigged next to a size 16 hook he didn’t have to wait long for the alarm to sound. In fact it can’t have been more than five minutes before the first tench was landed. These continued to barge in throughout the session and come 11pm more than two dozen had been landed, the best a shade under Ollie’s best of 5lb 5oz.

Dad had also joined us and was experiencing similar action, however when he left as darkness fell he had included three crucians to around 2lb 8oz in his catch. I was amazed that Ollie hadn’t connected to one as they were rolling everywhere and with our groundbait running out he made his final two casts. It was around 11.15pm and l had almost thrown the towel in but a stuttery take saw a crucian hooked, definitely bigger than anything he had seen before and weighing 2lb 10oz we both were relieved as well a very happy anglers.
As we packed up the other rod sprang into life and another smaller sample followed and although our thoughts were that the crucians were just about to get their heads down we both left well contented