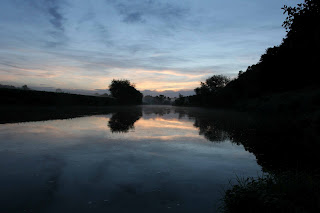 It’s rare that l get out on a Saturday evening, yet today was an exception, and with the weather humid and still and with a few hours to kill in the evening, headed to Johnson’s in search of crucian carp. Using the groundbait lead and small pieces of corn it took no time at all for the first of six tench to grab the hookbait. Around an hour before darkness the crucian’s arrived and come 9.30pm l had managed six, the best probably a big two.

For anyone that’s thinking, what’s the method-lead, well it’s simply where a ball of groundbait, either Sonubaits Krill or Supercrush Green, which is pressed around a 1.1oz Korum K-Grip lead instead of a method feeder. Next to this is a short hooklink, usually four inches of 0.15 Reflo Power along with a Korum Xpert size 16 hook containing a short hair. There is absolutely no casting involved, all l do is hold the ball of groundbait next to the reel and then swing this out into position. The difficult thing about this method is getting the groundbait mix just right and swinging the groundbait ball out.

With the weather getting hotter and still with a nasty ear infection decided not to fish through Monday night but to have a short evening session floater fishing. With thoughts of a 40lb grass carp on my mind l headed to Cemex Little Moulsham, yet after doing a couple of circuits, could only find two grassies which were deep within a snag along with a few tench an one of the old original carp. There were a few fish showing out in the middle over the gravel bar and when three fish decided to head to one corner l thought my luck had changed, yet these turned out to be, what l call the breeze-block stockies. I then headed to Cemex Match Lake and managed to get a few fish taking but these only took one bait before heading off, so desperate to get a bend in the rod, ended up on a Farnham Water where l took six carp in just two hours, the best around 12lb. 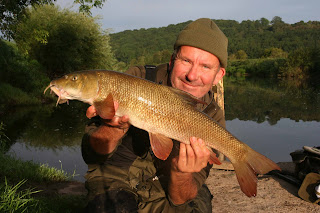 Early Wednesday morning l found myself once again heading to the river Wye, this time with my good friend Chris. He had fished a few stretches in the past and like me wanted to find a few more, so although we would be casting a line at times, our trip was more of an exploratory trip than a fishing trip. The first stretch we looked at was upstream of Ross-on-Wye, one l had found out about from searching the internet. Arriving mid morning g and paying our £10 day ticket at the farm, we headed to the river and walked the complete stretch. Two other anglers were already fishing and had caught upwards of fifteen barbel in a day before, so our hopes were high and after locating a couple of likely looking pools for pike later in the season we settled in a couple of comfortable swim midway between the boundaries. Six hours later nether of us had managed a bite, and with the other two only taking one chub we consoled ourselves by saying that the river must be having a bad day. We decided to call it a day at 7pm, as this would give us time to find the stretch that Chris was to introduce me too before darkness fell, however just as we were packing up the tip rattled and my biggest Wye chub saved a blank. After getting lost in the Hereford countryside we finally found our destination with just about enough time to set up camp for the night and cook a hot meal before darkness descended. I have to admit that, apart from kipping under the stars in France, this has to be the quietest place in England that l have ever spent a night. The only noises heard were owl’s in the surrounding hills and salmon leaping out of the river. Setting the alarms for 5am we awoke to a glorious misty dawn and after setting up on a concrete salmon jetty it didn’t take long for the tip to pull round from another Wye chub. A couple more followed before the tip slammed round and the first barbel of the trip led me a merry dance around the river. Although Chris had introduced me to the stretch, he hadn’t fished it before and was set up further downstream in a worn swim that turned out to be a good swim on the beat, yet after a few hours had failed to get a bite. Although l was catching l decided, after talking to the gamekeeper, to move downstream to a good barbel area, yet come midday l was also biteless. Chris had also moved into the best swim on the stretch and in a couple of hours managed three barbel as well as losing three and knowing we had another stretch sorted and with time on our hands headed to yet another stretch for a walk. Although we arrived home later than we would have wished we both agreed that we had gained more knowledge than we could have ever wished and know that our homework and hard work will repay us in future sessions, not just for barbel but also pike. I will be back up next week for a couple of days, so watch this space.

Amazingly on Friday morning l was up early again, this time for a guiding day at Gold Valley. Both Ron and Martin both enjoyed rod bending action from numerous carp, well into double figures, using either the pellet waggler or groundbait lead.
Posted by Unknown at 05:24