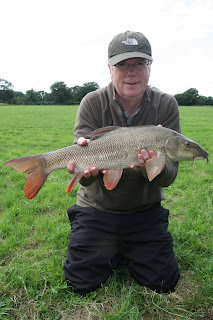 This summer has to be one of the hardest and most frustrating l have ever known. The summer, or lack of it plus the constant rain has seen not just the angler struggling to get out and fish, but the fish to feed, well at least on a predictable level and as for the birdlife, it seems that they are all having chicks now. 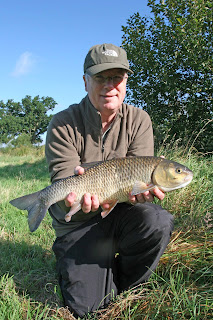 I always look forward to a roving day on the Loddon and today l was guiding a new customer Mark who, although catching the odd barbel after dark, was struggling for bites during daylight. Meeting at 7.30am we headed downstream and dropped into what’s normally a productive swim and after around fifteen minutes the tip pulled round and a chub graced his net, albeit the smallest chub l think l have seen on this stretch for years. Moving to another, one that Mark said he would have walked passed, it didn’t take long once again for a bite to develop, this time from a chub weighing 4lb 9oz. It was a great start, yet after covering a further four swims we failed to tempt another. I had dropped some bait in the swim that produced the bigger chub and after a few hours Mark dropped his rig stealthily into it. This time no small plucks were forth coming, either a sign that it hadn’t recovered or that a barbel was feeding. It was obviously the latter as after ten minutes the tip whacked round and after a fight in a very confined area a modest barbel fell into the waiting net.
After a break for lunch we headed downstream and l introduced Mark to a couple of my favourite and productive swims, both of which showed sighs that either barbel or chub were present, yet the bite we wanted didn’t come, yet l know it will, probably tomorrow when Mark will be returning.
Posted by Unknown at 02:49