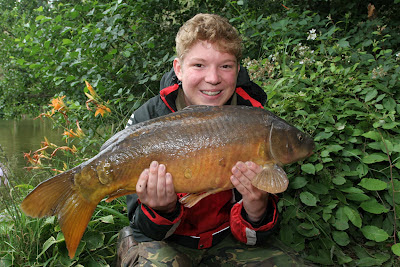 Over the past two weeks l have been out on the bank numerous times with my young angling super-star, Jake Curry. The first session was at Broadwater where he caught numerous carp into double figures, however Jake isn’t driven by size, what’s more appealing is learning new techniques that he can practice and perfect.
I’m getting the feeling that Jake has a love for not just predators but flowing water and when l suggested we head back down to a free stretch of the river Itchen he jumped at the chance, however it wasn’t the pike that we were going to target but carp, as last winter we had spotted one well into the twenty pound barrier, as well as seeing a youngster land three doubles.

The first thing we did was to walk the stretch looking into its crystal clear waters through polarising glasses and although no carp were spotted numerous roach to well over the pound were, along with numerous other species. Carp Corner was occupied and this angler, a regular had taken a double figured carp earlier in the day, he was about to move downstream for a spot of float fishing, so we jumped in once he moved.
Things didn’t look good as loads of floating weed meant casting every few minutes and the mosquitoes were well active. Darkness was falling and we agreed to fish till 10pm, however just before packing up, Jake found himself to a carp that did its best to win the battle, however after a tense few moments Jake slid the net under an immaculate ghostie common weighing 11lb 2oz. Unfortunately my camera was playing up so l had to take one on my mobile which as you can see is appalling, sorry Jake, yet we were both on a high as we left.

A few days later we headed back down to the stretch, this time with trotting gear as Jake wanted to try and tempt a few roach. Feeding a swim we first spotted the odd grayling intercept the bait, however it was gudgeon that kept him busy. After half an hour of feeding a shoal of roach turned up, intercepting every free maggot that swept downstream, yet apart from two small ones, they refused his hookbait. An hour of frustration followed before a few dark shadows appeared which were a combination of the odd salmon moving upstream and chub. A quick change of tactics to breadflake saw one of these big chub move upstream and devour Jakes offering, yet after a couple of seconds playing the fish, it won the battle and broke his hooklink. Moving downstream we sat for a couple of hours behind carp rods, yet they failed to produce and in-between one of us would try the stick catching numerous fish including Jakes first ever perch. I tried a swim catching a few small roach, gudgeon, grayling and the pesky minnow but for big fish it was pants and as l looked into the water, the image reflected this. 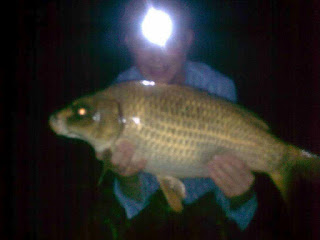 The following week we decided that it was to be a day of catching fish and headed to a small day ticket water where we would try the pellet waggler. This tiny lake holds a high thirty pound carp along with around twenty others, mostly doubles and after a couple of hours of watching nearly all the lakes residents intercepting our free offerings Jake finally hooked one. Obviously not happy, this carp fought for its life; however Jake won the battle and slipped the net under an immaculate old carp weighing 11lb 9oz. After this capture the carp seemed to disappear and although l tried all day to regain their confidence as well as looking in all the likely looking spots around the lake failed to spot one. Jake had changed tactics after this capture and was happy catching a mixture of species using 8mm S-Pellets under a delicate pole float which included quality roach, gudgeon, rudd, true crucians plus a few ornamentals as well as crayfish.
Posted by Unknown at 03:38