Having the day to ourselves come Friday we headed back to the productive barbel stretch, only to find the surface covered with floating weed. The good news was the river had risen a few inches and was carrying some colour, yet our problem was keeping a bait in the water long enough for a barbel to find it. Chris dropped into the swim that had improved as the week progressed and took two early barbel and a chub, yet my efforts upstream went without incident. You have to keep you’re wits about you when holding the rod high in the sky as every now and then swans come into land. A quick cast in Chris’s swim produced a Wye best for me, yet further casts just saw the lines getting dragged out of position. We decided to have an hour in the bottom swim, yet this was also proving to be difficult with Chris taking one more barbel before we surrendered to the conditions and headed home early afternoon. 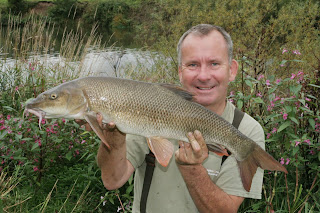 I’m thinking of doing something slightly different next year and instead of the week away I’m going to offer two days fishing with accommodation also included. Its early days yet but these trips will probably start in July and run through to October. In total I will have six of these trips available so if you are interested then please let me know and as soon as I have more details then you will be the first to know.
Email – duncancharman@icloud.com
Mobile – 07928 617006
Home – 01252 315271
Posted by Unknown at 08:44