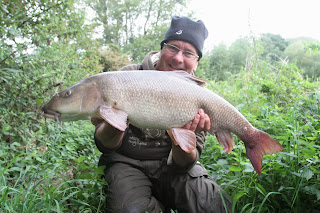 Getting back from the river Wye early on Friday at least gave me some extra time to clean up the kit and get organised for another guiding day come Monday and although I did sneak in a few fishy related jobs over the weekend it was the girlfriend’s weekend off, so these were minimal.

Having dropped the lady off early Monday morning I headed to the river Kennet to meet up with a regular and good friend Ron Jackson. Ron had purchased a syndicate ticket earlier in the season and although it gave him great access to each swim, had failed to get the rod tip twitching in four previous outings. Today though wasn’t all about catching fish but looking at the stretch, using my watercraft to pinpoint potential swims then trying the tried and tested method ‘The pellet-lead’ in these in the hope of a bonus fish. The first swim we tried, once Ron had picked himself up after stumbling in a pothole was where two streams meet and although the first cast yielded nothing, the second did. Unfortunately I was walking the stretch at the time but when I returned Ron looked well happy with himself after landing a modest barbel. The second swim failed to produce yet the third resulted in a personal best bream weighing exactly 7lb. A couple more swims were tried before dropping into our last swim, one that looked really fishy and sure enough after half an hour the tip started to rattle in true chub, maybe bream style but the bite was missed. Both Ron and myself know why the bite was missed; let’s just say mobile phones and fishing don’t always go together!

Back at home I was hoping to get a few things sorted like getting my weekly blog uploaded, yet this never happened as my time was taken trying to find time over the next couple of weeks to accommodate more anglers wishing to fish the Wye. I’d love to say I succeeded but looking at the diary I have very little time and not wanting to cancel any pre-made arrangements just couldn’t fit these requests in. It’s good to be busy but sometimes I just would love to see the light at the end of the tunnel.
Tuesday I finally managed to upload ‘The Wye Experience’ as well as finding time to play nine holes of golf very badly with my mum. I might be busy but we should all find time for family, if we cant then, well what’s the point!

With the weather forecasted to see a dramatic drop in temperature over the next few days I almost grabbed the barbel kit and joined Chris on the banks of the Loddon, yet more important things got the better of this and I ended up tapping away on the computer. Unfortunately the call never came from Chris and I feared another blank, yet like me, if you’re after a massive fish then you just have to keep you’re chin up and forget these.

Wednesday I met a new customer Tim, who’s son had bought him a days guiding with me as a Christmas present. We had purposely held back on going to the Loddon as I told Tim that September and October where the best months for barbel. We couldn’t have timed it better as the following night the mild spell was to end with chilling north east winds forecasted for Thursday and temperatures dropping some ten degrees. Arriving at the river we found one angler on the river and as expected saw him snuggled up in the best swim. Fortunately he was one of my regulars so we were able to work around each other. The first two swims only produced the odd knock yet with Mark having vacated the good swim we tried our luck and within a few minutes the tip pulled round which saw a personal best chub of 4lb 14oz landed. Heading downstream and having no further success in a couple of swims we dropped into a swim that now and again produces a barbel, however never a big fish. Tim was by now moulding the pellet round the lead and lowering this into the river and as we chatted I noticed the rod fly round. To be honest we were getting on so well and having a good chat that the standard forty minutes was well gone when the bite came, another lesson learnt maybe and after a nerve whacking few minutes that saw the barbel heading upstream and burying itself in a weed bed Tim finally got it moving and when she surfaced I slipped the net underneath. Weighing 10lb 6oz it was another personal best and a surprise to see this swim produce a double. A few more swims were covered before moving to another stretch and after dodging the Pheasants and Partridges in the road on route soon had a bait positioned in a productive swim. Some fifteen minutes past before once more Tim found himself attached to another barbel, however she was ‘the one that got away’ as they say, as after a long first run went through a snag. No more action came, yet with another double caught for a customer, I had the urge to go myself and with the tackle all sorted set the alarm early the following day. 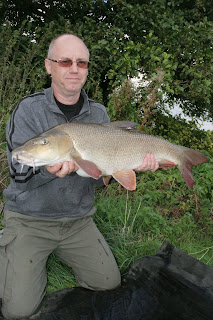 Heading for a much harder stretch and with a few swims on my mind I spent the standard forty minutes in each. The first, the banker swim bought one hand trembling moment and after three more failed to show any signs I decided to call it a day, or should that be morning. The previous night saw temperatures dropping to five degrees and with a strong cold north east wind felt I was on the back foot, yet on passing a swim I felt the urge to cast out. Five minutes later I found myself slipping the net underneath a big barbel, one that weighed 12lb 2oz and unfortunately was the same one caught around half a mile downstream, last month. I was beginning to think that they had moved; now I know.
Back at home it was a case of spending a couple of hours returning emails, downloading images, updating diary entries etc before sorting out the crucian kit for a couple of hours into dark with crucians on our minds. I knew it was never going to be easy, what with the drop in temperature, but more importantly the change in wind which was now strong and coming from the north-east. Chris joined me and come 5.30pm the rods were out, however with just three anglers on and the one I spoke to in the car park having blanked I wasn’t expecting fireworks. A small tench gave us hope early on, yet it was obvious things weren’t going to happen, yet I did still manage a couple of two pounders and a small common so it wasn’t all doom and gloom.
The last few days I been feeling a bit under the weather and really shouldn’t have pushed myself so hard on Thursday and as a result seem to have picked up a cold so as for Friday it’s a day in the office working my way through a thousand or so wedding images that need to be sorted by next weekend, joy!
Posted by Unknown at 03:42