A week of personal best, but not for me - Weekly report starting Saturday Sept 23rd. 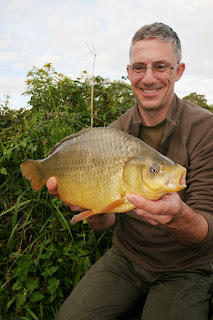 No fishing this weekend and with a christening photography job booked in for Sunday I’ve had to keep of the computer in order to earn a few brownie points.
Monday was all about trying to complete three jobs, an article for a European magazine on colouring and injecting pike deadbaits with oil, sending images from a past wedding shoot to the album designer as well as manipulating images from the christening. To be honest all tasks weren’t completed come the end of the day yet come Tuesday they should all be put to bed. I did manage to get out with the rods, albeit with matchsticks keeping my eyes open, yet apart from one hand hovering moment in a big barbel area the short three hour stint past without reward. Back at home I managed to get some images and answers sent over to Paul at Coarse Angling Today on favourite images for a ‘Hot Seat’ feature as well as quickly looking through the latest issue, blimmy, I’ve just come second in a competition, the first prise I’ve won for years!
Tuesday was a relatively early one as I wanted to complete Monday’s jobs as well as getting the images taken for the pike article, all of which were done by 4pm along with plenty of other little angling related jobs and come 5.45pm I was making my first cast, once again in the hope of a monster barbel. Chris joined me later so I let him try the banker swim whilst I roved around trying to locate some other swims, yet come 9.30pm it seemed as if the river was dead, not even small fish were seen topping. 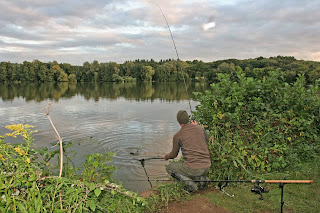 Wednesday I spent the day in the company of Carl from the Carl & Alex duo more commonly associated with Anglers Mail, yet Carl has just joined Online Fishing so with a hectic schedule we headed to the river Loddon to complete some fillers on specimen barbel fishing. I think Carl was quiet amazed when I introducing some pellets into the river from the bridge only to see a chubs mouth come up from the depths within a split second followed by more and the occasional flash of a barbel beneath. Once the water clears I’m sure this location will give us some fantastic underwater footage. Back on the river we almost completed a task of twenty ‘Hints/Tips’ and ‘New and Abused’ short videos however an old plane doing loop the loop made filming difficult later in the day. I did have a few minutes in a couple of swims in hope of a barbel, yet an over enthusiastic three-pound chub gate crashed the party, but it did give Carl some extra footage for his own website.

Thursday I had a new customer booked in for an introduction on catching crucians from Enton using the devastating Groundbait-Lead method. Meeting at midday we soon had a swim chosen and baits in position and after casting every twenty minutes or so an alarm finally sounded and a small tench was taken. That was the start of a strange session when fish came in small batches and come 10pm when things went quiet, Steve had enjoyed a great session landing seven crucians including fish of 2lb 14oz, 3lb, 3lb 1oz and 3lb 2oz, along with three tench, one rudd and a roach. Fishing partner Chris joined us at dusk and again experienced a short strange session with a few missed bites, yet finally after tinkering with his end tackle managed to bag himself a small tench and the fish he’s been after, a three pound crucian, albeit just an ounce over the magical mark.
I would have loved to have given the Loddon another short morning session, yet with a weddings booked in over the weekend, lots of other things in need of doing as well as very little rain during the week decided to ease my mind and leave things to next week when hopefully the barbel will be a more obliging mood!
Posted by Unknown at 12:35