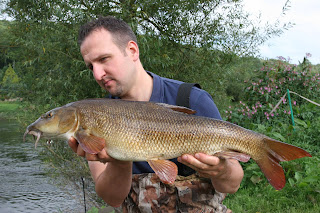 After a full English breakfast we were met by Pav who would be joining Alan for the day. Arriving at the river in once again bright sunshine, it was obvious that the river was dropping and the colour from Monday had rapidly disappeared. A strong, chilly easterly wind was also blowing and my thoughts were that this could kill the sport, yet l needn’t have worried.
Pav was only with us for the day, whilst Alan had booked a mini holiday and would be staying till the end of the week, so we agreed to let Pav have the banker swim whilst Alan headed upstream, starting where Jake had fished the day before.

Pav is a Frensham angler so we had plenty to discuss throughout the day whilst he caught barbel. He was of to a great start and set himself a target of twenty barbel for the day, yet after a dozen, they dropped back in the swim and he had to work for a further four before the day ended. Sixteen barbel to 8lb 2oz plus a few chub certainly isn’t a day to grumble at. One item of terminal rig kit that l found extremely useful when fishing the Wye are Korum large Quick Change Beads as these make changing hooklinks quick and simple. Just a word of warning though, always check your knot after tying on a Quick Change Bead, and don’t use a six turn blood as these don’t bed down well, a grinner is far more reliable.

Alan initially started were Jake fished the day before but only managed one small barbel so feeling that the fish may have dropped downstream moved a hundred yards or so and was soon bent into a fish. Come 7.45pm he had landed a further five barbel to 7lb 4oz which included a brace right at the end.
Posted by Unknown at 03:49