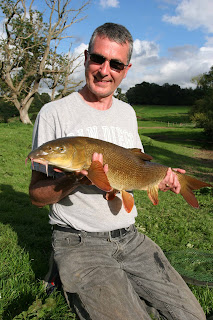 Having made a late start the previous day, we were all on the river early. Kevin took the banker swim whilst l set Jake up on a comfortable salmon croy which extended well out into the river. The weather was once again hot with bright blue skies and a brisk south west wind.

I was hoping that the problem of lost fish would be reduced today and had changed the hooklinks to Korum Green Power Mono in a breaking strain of 8lb. Straight away it seem to work as even when a snag was hit, it was able to slacken off, let the fish swim out and regain the fight. Even if this didn’t work, steady pressure seem to eventually get them moving and although the hooklinks on many occasions had to be changed due to fraying, at least the fish was landed.

Kevin was expecting to be instantly into fish, yet he had to work for his fish which came constantly throughout the day. Reluctant to pack up late in the afternoon, he finally ended with 13 barbel to 8lb 2oz along with the odd chub to 5lb 8oz!

Jake amazingly also found the fish in an obliging mood and l have to say l was well impressed how he stayed focused all day. Obviously no river scares this young angler and he conquered a mans river like a man and ended the day with seven barbel to 7lb plus plenty of chub. What l think Jake will remember is the countless salmon that constantly leapt clear of the water in his swim. He even tried a small plastic lure in the hope one might grab it or a big pike might show and whilst he cast away l took the opportunity to catch the odd barbel from his swim.
Both anglers left late afternoon, so the tally could have been far more, yet this gave me time to head back to the B&B to meet my next customer Alan.
Posted by Unknown at 03:54