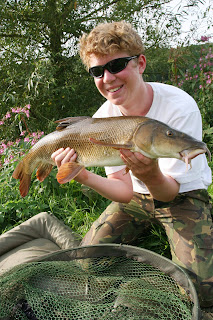 After meeting Jake and Kevin at the farmhouse we finally arrived at the river around 9.30am. No other anglers were around and with the same two anglers booked in for two days it seemed only fare that we place young Jake in the banker swim. The sun was hot and my thoughts were that it would be tough, yet after setting Jake up l filled the feeder with some Sonubaits Hemp & Hali Crush, placed two 8mm Pellet ‘O’ on the hair and cast to where the river keeper had told me two. Paying out a few yards of line l was amazed, as were Jake and Kevin, when a few taps signalled a bite. I hadn’t even had time to put the rod in the rest and the first fish of the week dropped into the net, a chub around three-pound.

After helping Jake land a couple of barbel, Kevin and l headed to the top of the beat, an area of relative unknown, yet not far from a famous angling landmark, the old railway bridge supports that sat out in the river. With Kevin settled l headed back to see how Jake was getting on and with a couple more chub and barbel landed he seemed in his element, yet he seemed to have lost far more than he had landed, due to cut offs and snags. The river-keeper confirmed that the swim was snaggy, yet after a few hours Jake had located where these were and was starting to know the swim and land a high percentage of his fish. Spending an hour with each customer, l was soon back sitting with Kevin and as l watched his rod bent over and he was into a barbel, yet the fight lasted just a couple of seconds before the hooklink parted. An hour past without any more signs, so Kevin moved into a lovely looking swim whilst l headed back to see Jake. He was still catching, however the fish had become somewhat cagey and thinking they had backed of l asked if l could make a longer cast downstream. Jake was using my tackle which made the somewhat tricky cast easier for me and the Korum Neoteric XS 12ft Multi-Quiver Power easily launched the 3oz feeder into position. Placing the rod in the rest l counted six seconds before the tip started bouncing and Jake was back in. The next cast took ten seconds! 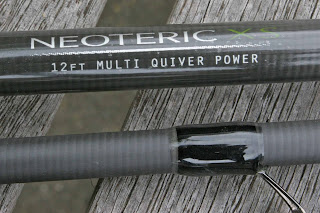 Unfortunately the phone signal isn’t very good on the river and Kevin was unable to get in touch to say he had just landed a barbel weighing 7lb 12oz along with a few chub. Happy to keep on the move, Kevin continued to try new swims and although no more barbel came to his rod, the odd chub kept his interest. Jake was exhausted come the end of the day and had managed to bank a total of eleven barbel, the best 7lb 2oz along with eight good chub.
Although the day was a great result, l was concerned with the amount of fish being lost. Braided hooklinks in a snaggy swim isn’t very swim-friendly, as if the angler has to pull for a break, the line could go anywhere, leaving at most, around thirty yards of line in the swim. Pre-stretch mono was what we had started on, yet on occasions it was as if someone was cutting the line with a pair of sharp scissors, so this wasn’t very fish friendly, especially taking into consideration we were using micro-barbed hooks. To say l went to bed with the brain ticking over is an understatement, yet l found the solution the very next day.