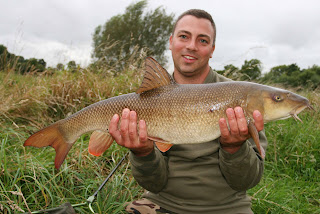 Well after a week on the Wye watching customers rod constantly bending, it was time for a reality check and with a new customer looking to catch a barbel or two it was back to the Loddon. Meeting at 8.30am we found another car in the car park and with only one swim that l was confident of catching from was gutted to find this angler settled within. My first impression was that he must have known about this swim, l call it the jungle as there’s only a small hole in the bankside vegetation to push a rod into and land fish. Unfortunately another angler had ripped the vegetation to pieces and made the swim stand out a country mile for others, so from the off l found myself on the back foot and when the angler asked for a picture of a barbel he had caught l felt that this should have been ours. We tried a number of swim, including the jungle, where we watched as chub drifted in and out under the far bank willows but our efforts went unrewarded, so we headed of downstream to a banker swim, well last year it was, yet this year none can get a bite from it. I knew some time that the fish would start to group here and after fifteen minutes the tip flew round and James found himself attached to a big barbel, however after doing the hard work and keeping it from going to far downstream the rod suddenly swung back and she was gone. James had seen the fish and knew it was a big one and l felt his disappointment deep in my gut.

Other anglers had arrived so after a late lunch we headed to another stretch, yet after covering five swims in a known area the tip failed to move. Having a couple of hours left before dusk we headed upstream to a couple of my favourite swims and soon after dropping the ‘pellet-lead’ in the tip once again flew round. James once again found himself playing a barbel but after a few seconds it headed upstream and snagged him. It looked like it wasn’t going to be our day, yet after some gentle persuasion he managed to get her moving and finally l drooped the net under what we thought was going to be a double, however the scales had other ideas and settled on 9lb 7oz, a new best for James. We could have gone home at that point but James wanted to try the other swim, one l call ‘the five pound chub swim’ and within a few minutes was holding a chub of exactly five pounds!
Effort equals reward and there was plenty of effort in the session and we got the reward.

Here are a few words from James…I found the day very enjoyable and feel I got a lot out of it.  The main things that I gained from the day was the confidence in setting up rigs with the knowledge of why rigs are set up in a certain way and also how I should approach a river when targeting Barbel.  By hooking 2 Barbel and a Chub I now feel confident to go in search of some Barbel my self with full confidence in what I am doing.

Duncan was very knowledgeable and there was plenty of time to pick his brains and get some great information from him.  The day was made all the better by being on a fantastic looking venue and a great place to be.