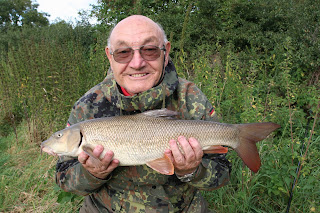 September has arrived and although the days have been warm the nights are cold and with the weed beginning to die back and the water temperature dropping it seems its been a wake up call for the barbel that have, at last started to feed on our rivers.
It was a shame that a customer lost a very big fish earlier in the week, yet our determination paid of with a near double, however my latest customer, Ron gave me a real challenge as unable to rove around in the normal way, l had to locate some swims, very close to each other with a few close options. Instead of fishing the whole day, l suggested that we fish two afternoon to dusk sessions in the same week, the first being on Tuesday.

Arriving at 2pm we headed to a swim that, although l know contains barbel, seems to only produce after dark. Casting the pellet lead to showing gravel on the far bank we sat back and waited. After an hour nothing had happened but river work upstream saw the river colouring up and my confidence rose. Soon after the tip bounced round but the strike met thin air, a crafty chub l suspect. A swim downstream is usually difficult to approach in bright sunshine due to your shadow being thrown across the river and being very shallow the fish normally see you before you see them, however the coloured water created an opportunity not to be missed and after a few minutes Ron found himself playing a three pound chub. Moving to another swim it took around fifteen minutes for a three-foot twitch to happen and Ron found himself to his first Loddon barbel, not a monster but a barbel weighing 5lb 9oz. We could have moved but a barbel strangely hitting the surface made us stay and as we watched the tip were fortunate to have a kingfisher land in the tree just a couple of feet from us. The signs were there that fish were around and as dusk descended the tip bounced round in true chub fashion, yet they had the last laugh as both were missed. Three bites in just a few hours on the Loddon in bright sunshine, rare!

We were back on Friday in great weather, albeit not brilliant for fishing. Rotating the same three swims we failed to get a response in the first. The second is what l call the banker swim and after dropping some bait in whilst fishing the first swim we made our way to it with expectation. Fifteen minutes past before the three foot twitch came and once again Ron found himself attached to a barbel, yet once again it wasn’t from the wished for monster, but one that weighed 5lb 5oz. Moving to the last we decided to sit it out till dusk as this swim gives the best opportunity of a real specimen, yet the tip moved just twice, the first from a minnow that had speared itself onto the hook and the second from an over enthusiastic roach of around 6oz.
To land two barbel in two short afternoon session was a real result and proves that you don’t have to fish after dark to catch them. Well done Ron, you’re a natural!
Posted by Unknown at 02:28