Last winter Mark Cathcart travelled down from Herefordshire in search of his first double figured barbel, yet the day dawned bright and after searching the river intimately just one chub graced his net. 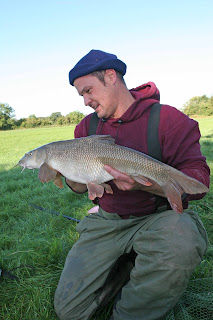 I promised Mark a return visit, free of charge, as l knew how much he wanted a double, however our planned trip coincided with the first grass frost of the year and with a chilly North West wind and high atmospherics things once again looked bleak. Arriving later than we would have liked, we found an angler already set up in the one swim that’s been producing this year, so moved downstream to another that, although has proved difficult this season, has a track record of producing doubles. Stealthily dropping a bait under an overhanging tree that created shade we sat back shivering unaccustomed to such a cold start. Fifteen minutes later though the cold was forgotten as the tip pulled round and Mark found himself attached to a barbel that headed downstream under the trees. I must admit l expected a double to show, yet it wasn’t to be as one of the stretches smaller specimens had beaten the big girls to the bait, yet it was Marks first Loddon barbel, so all was not lost. Still suffering with a skin complaint in my face and eyes l headed to the doctors early afternoon leaving Mark to rove around the river in search of his dream, yet it wasn’t to be. I’ve promised to keep Mark informed on how things are going and if l think there is a really good chance of a double will once again invite him down and likewise Marks going to keep me informed of any pike of dace sport up on the river Wye. Already looking forward to catching up with him soon.
Posted by Unknown at 04:54