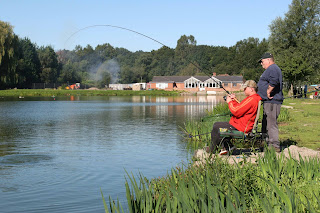 With an overnight temperature of just seven degrees in August and a chilly brisk north east wind, things were always going to be difficult.

James and Thomas are my girlfriend’s sister’s children and it’s always a pleasure having them, plus granddad along and the banter starts almost immediately. I wanted the lads to try a new method, the pellet waggler as this would get them casting a feeding constantly, something that’s so important with most types of angling. I arrived around half an hour before the boys and had a few minutes myself. Somewhat dubious as to whether l had bought a tactic that wouldn’t work due to the conditions l was soon reassured with a couple of carp and a bream.

Last time we all went out l sat with James, so today we swapped round and l helped Thomas who soon got the knack of casting, and realised that brute force and speed doesn’t pay, eventually getting into a nice rhythm along with even feathering the cast so the bait lay straight behind the float. Out came the catapults in went the pellets and along came screaming clutches and bent rods. After numerous carp to around 10lb the swims, venue hit a lull and although the odd carp came between this time and 2pm, we knew that it would be tough till 6pm when they usually switch back on.

I have to say it was a really enjoyable day, in the company of two great lads that love each other to bits and respect those around them and l look forward to the next time they ask if l can take them out.
Posted by Unknown at 01:39