Sixty five barbel for the week! 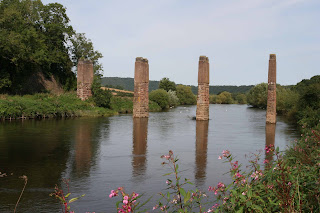 Having spent a number of days roaming around the banks of the river Wye in the Hereford country side, l finally decided on a private stretch of river midway between Hereford and Ross-on-Wye. My choice was based on a number of factors, the first being the sheer beauty of the stretch. I was also able to drive the car along the river bank, so no long walks for customers. The fishing was also meant to be good, and although the size of the barbel may not be as big as on other stretch, the beat did have a famous pool on it, one that could be booked in advance, and was an almost guaranteed to provide whoever settled within it and rod bending day. Another point was the beat had no other guides working it, so l wasn’t going to upset anyone and felt that the results would be based on my sheer hard work during the week.

Sunday evening the car was packed, albeit after a junior barbel teach-in for Farnham Angling Society on the river Loddon. With every eventuality covered, from rods ranging from 1.25lb T/C to 2.75lb just in case of heavy rain in the welsh mountains or if a big pike showed, and feeders ranging from 1oz to 5oz l finally hit the road, early Monday morning. Half way to my destination the mobile range, it was my brother who had lost his keys. Thinking l might have chucked them in with my gear l had to stop the car, unload all the kit on the side of the road and carefully hunt through everything. After not locating them l was further on into the journey when a text came through that he had found them, however l was now fighting for time, as l had arranged to meet my first customers at 9am. Arriving at 8.45am things seem to be going to plan, yet l then lost my mobile phone, which was later found by Jakes mum, laying in the car park at Sink Green Farm, the B&B l was staying at.
Although the weather was looking great, it wasn’t exactly brilliant barbel conditions and after thinking hard for a while l decided that if my customers were to land fifty barbel for the week then it would be classified as a resounding success.
This is how the week went…
Posted by Unknown at 04:10