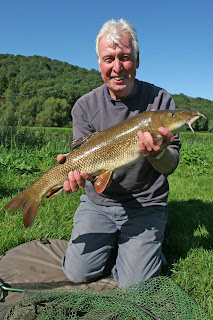 Alan was my only customer for the day and with six other anglers on the beat we were expecting one to be settled within the banker swim, yet it was free. Knowing one might want to drop into this later in the day we headed upstream yet with a cloudless sky and temperatures reaching almost thirty degrees and absolutely no wind the river fished hard. I even cast a rod out for a couple of hours in the hope of locating a few barbel for Alan, but apart from one half hearted bite failed to score. One of the highlights of the week was whilst standing on the croy talking. We heard a loud noise and watched as two RAF helicopters flew along the path of the river and right over our heads at probably no more than forty feet.

It was obvious the low clear river and bright conditions were making the barbel fishing tough so in desperation we headed back down to the banker swim where Alan managed a couple of barbel on Peperami before calling it a day and heading home.
Well what a week, sixty five barbel landed along with forty seven chub, l can’t wait to return.
Posted by Unknown at 03:37