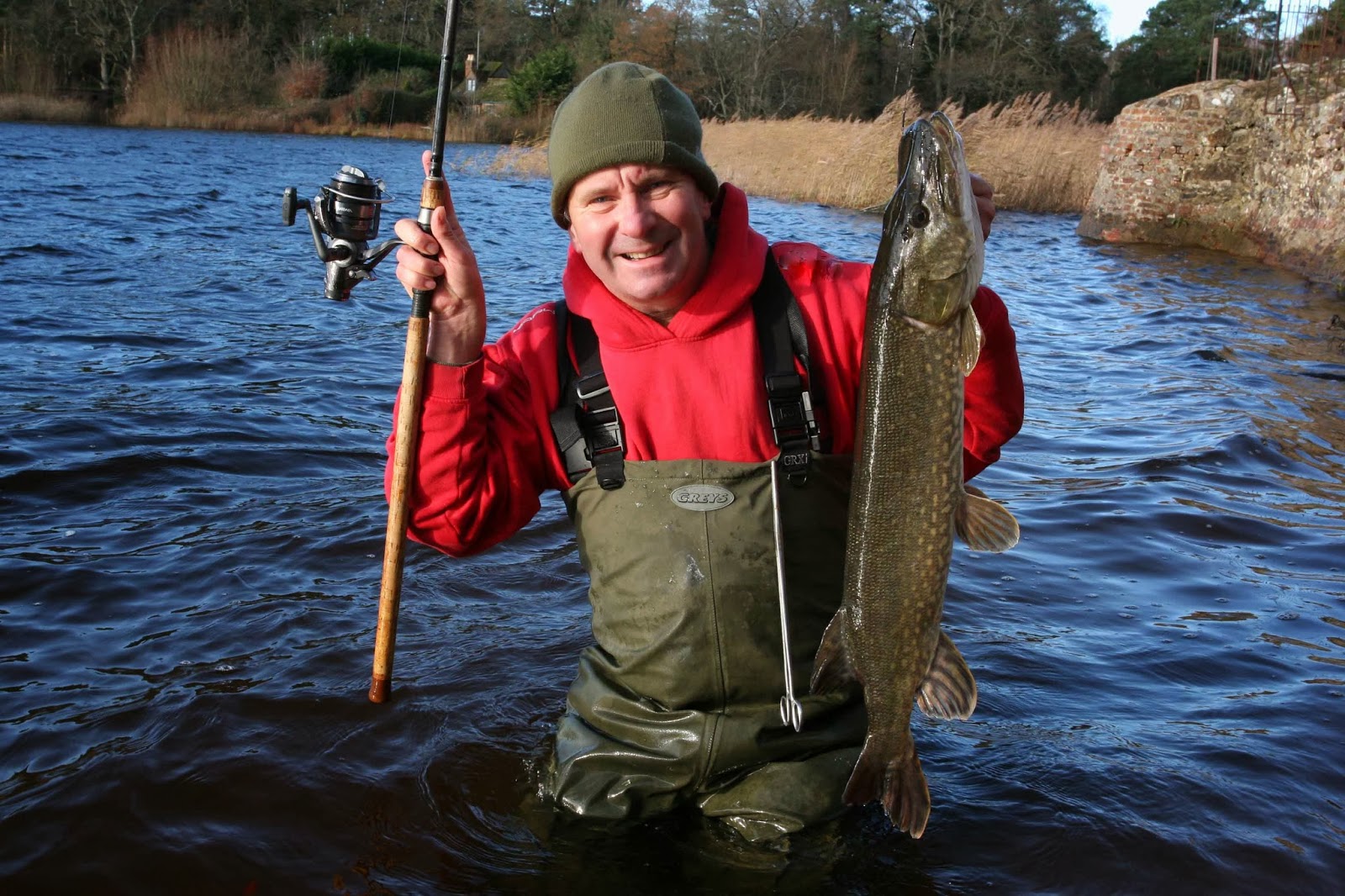 Its all well and good casting out a blatant in-your-face deadbait popped up of the lead with a red foam popper on waters where its never been used before, yet on pressured waters containing big wary pike that have seen it all, then a slightly more complex and subtle approach may well be worth the effort.
Critically balanced baits in the world of carp fishing are all the rage, why, because they counter balance the weight of the hook making the boilie fly into a carp’s mouth far easier. Carp have mouths designed far superior to pike when it comes to taking a bait of the bottom, so if carpers are going to so much trouble to create a bait that acts so natural, then it seems obvious that by doing the same with a deadbait will bring with it extra and more confident pick-ups from pike. 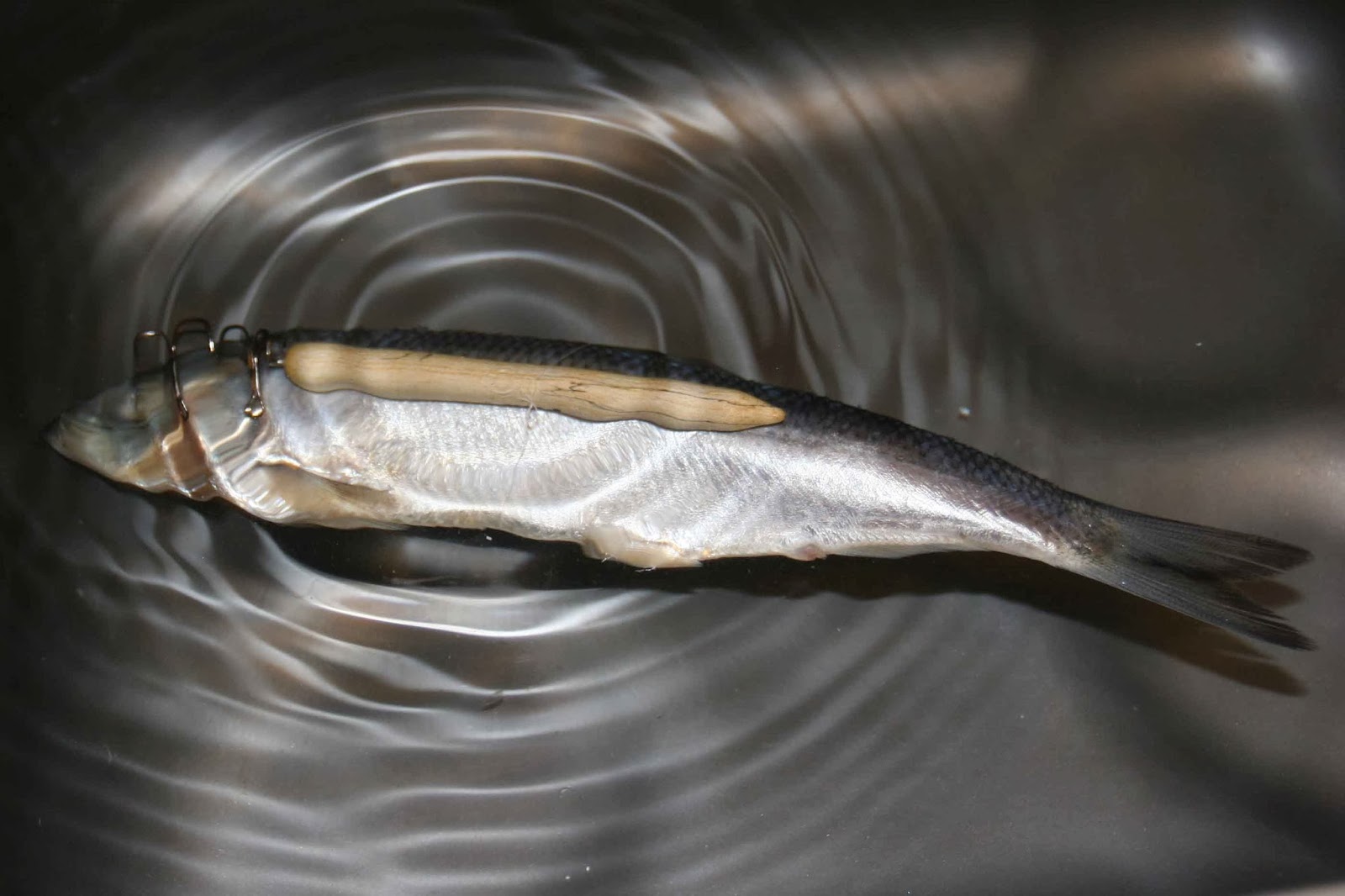 Unfortunately we can’t just drill a whole in the side of a deadbait and plug it with foam, like a carp angler does with a boilie; however by inserting a buoyant balsa stick within a dead fish, a slow sinking bait can be created. These balsa deadbait sticks come at a cost, around a pound each so they can’t just be pushed into the bait and lost every time a pike is hooked, so need to be attached to the trace to avoid this. Pushing balsa sticks into frozen sardines, herrings or naturals is difficult and often baits are split whist trying to achieve this. Its far better to mount the deadbait onto a trace along with pushing the buoyant stick, either into the body or down through the mouth straight after buying them from the fish monger, before freezing down. What I like to have with me on every pike trip is a selection of popped-up, slow sinking and natural deadbaits, all frozen down in individual containers ready to be used when I arrive at the lake. Dawn is by far the most productive period so the last thing I want is to waste time playing about with baits and rigs, especially on a freezing cold morning. Having rods made up, baits mounted on traces which can be quickly clipped onto my mainline is vital if I’m going to make best of this feeding period 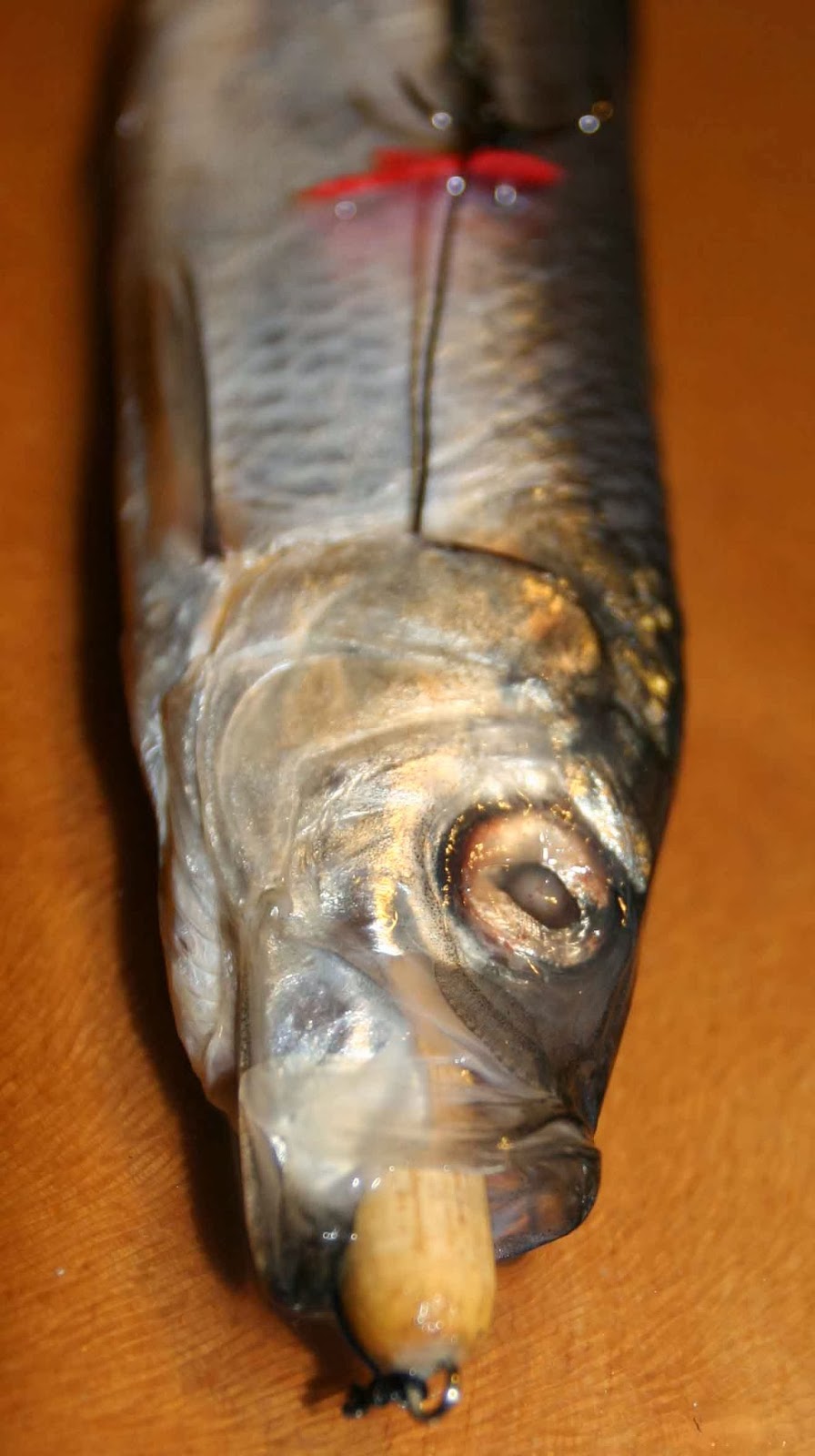 Having half a dozen baits of each type takes up room in the freezer so I have an old one in the shed where these baits are kept. Being a methodical thinker I will always have at least six of each, the popped-up baits frozen with poppers attached, slow sinkers with sticks inserted and traces attached plus standard bottom baits. It all sounds a bit complex, yet once you know the size of balsa sticks to place in a herring to make it slow sinking, it only takes a few minutes to rig up, test in a bowl of water, then place in the freezer. One small problem with making a slow sinker is that when its frozen it will become more buoyant so when one is cast out you will actually be fishing a pop-up until it defrosts. Slow sinking baits are brilliant when weed is a problem as they will slowly descend onto the top of it, coming to rest and standing out in a very obvious, yet natural way. The slower a deadbait sinks the better and getting one to be critically balanced, almost weightless, comes with practice, yet any bait that sinks slower than in its natural state is in my mind beneficial.
The slow sinking or critically balanced bait is what I consider to be my big fish method, one that when cast out will be left to draw a pike in through its own devices whilst my second rod will be either twitched back slowly over a period of time, worked through the swim using the sink-and-draw method as well as experimenting with different baits. The constant movement and working of a second bait over a big natural looking bait, such as a herring, will often get a response if a big pike is around and hungry.
Slow-sinkers are also great in swims that have been pre-baited and often get an instant response. It’s as if the feeding pike, after taking bait directly of the bottom see a bait slowly falling through the water and can’t resist it. To me it must be like a dying sardine that’s been stunned and is falling away from a sardine bait ball after being hit by a shoal of tuna. Inevitably it doesn’t go unnoticed! 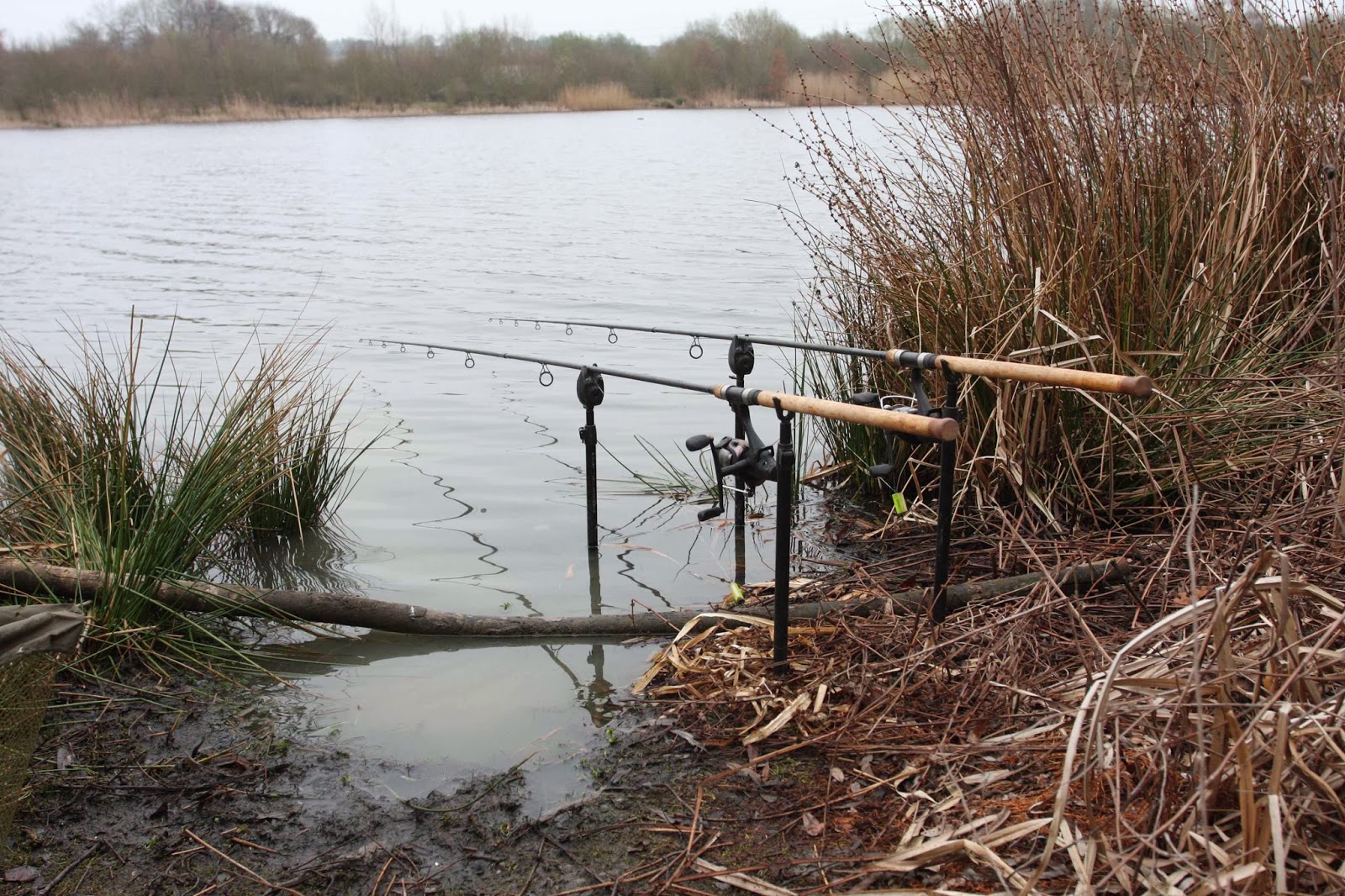 Natural baits such as roach and sea baits like sardines are great as slow sinkers, yet pushing a balsa stick through their mouths, especially smaller baits in the four to six inch size can be difficult so with these I tend to make a small incision behind the gills then push the stick into the fish’s stomach. Bigger baits such as herrings have bigger mouths and sticks can be inserted through the mouth. This can create a brilliant bait where the herring actually sits with its tail on the bottom of the lake and its head pointing upwards. Another benefit that baits with buoyancy aids, either inserted into them or attached to them, have is that they will naturally waft around in the water and a pike is expertly adapted at locating even the slightest of movement from a dead or dying fish.
All in all, if I can make it easier for a pike to locate my bait by making it more visual or presenting it in a way that it can be seen, as well as creating some movement to it and at the same time easier for a pike to grab, then I feel I have done everything possible to gain a response. Obviously location and weather conditions play a major part in consistently catching, yet rigs are one part of the jigsaw puzzle that I have securely in place.
Knowing exactly how my deadbaits are working when they are in my swim creates confidence, and when a big pike is landed on a rig and bait that has taken time to make up gives a fantastic feeling of achievement.

1. When using slow sinking baits I revert back to using drop-off indicators.
2. Location is paramount. Find the jacks and the big girls won’t be far away.
3. Getting a bait to sink slowly is easy. I tie on a balsa stick using bait elastic along with attaching two trebles to the bait before dropping it in a bowl of water. If it floats then a smaller stick is needed, if it sinks a bigger one is needed.
4. Once the right stick is found, I tie on a length of braid to it along with a small retaining ring to the other end. The stick is then either inserted into the body of the fish or pushed into the deadbaits mouth, before the retaining ring is placed on the treble hook containing the barb, followed by a bait saver, then pressed into the fish. The second treble has already been positioned in the tail root of the deadbait before the bait and trace are frozen.
5. A selection of balsa sticks, foam poppers and bait savers.
6. When going to all the trouble of making up traces with baits attached I don’t want to keep having to make up new ones after each capture so I prefer to use either a Titanium woven or single stand wire as these allow numerous pike to be caught before kinking. The only downside is they are expensive, yet in the long run, you will save money.
Posted by Unknown at 02:54