Day 5 on the River Wye 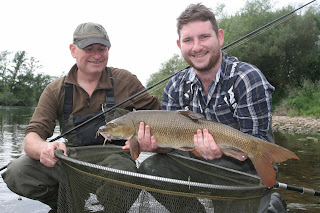 After an uncomfortable night I drove a few miles to Sink Green Farm where I was to meet Steve and his son Greg for a day’s barbel fishing on a Hereford and District stretch of the river. Another all day breakfast was consumed before they arrived come 8am before heading of to the river. Parking up then walking across a couple of fields finally saw us reaching the river yet disappointment set in as the swim I wanted to place Greg in was taken by an angler on the far bank. Undeterred we headed up river yet after a couple of hours just one chub had come to Steve’s rod. Apart from some holiday fishing Greg had never fished like this so it was pleasing to see that the angler further downstream was calling it a day after taking a couple of barbel. Standing out in the water we went through the casting process and then the playing process as on the second cast Greg found himself playing a barbel yet once again the mono hooklink parted, time for the braid! We took it in turns to cast with a couple of mine landing on the far bank, ones that produced Greg his first barbel, yet I could see it was important that he catch on his own cast and finally after getting the hang of things landed the feeder on the far side. I watched as Steve gave Greg the thumbs up then the tip rattle and bang, Greg was away playing the barbel like he’d been doing it all his life. Steve had moved downstream and had also found the odd fish which included barbel to nearly 8lb, yet after catching two personal best Greg left the best to last and l watched as he cast, hooked and played a barbel which dad Steve landed for him, one that weighed 8lb 13oz. Job done! With the rain clouds building and the lads eager to get back in time for a pint or two before England’s football qualifier started we said our farewells and I pointed the car south with an incredible 100 barbel and around 30 chub landed for the week. Who said the Wye wasn’t fishing well?

STOP PRESS –
I still have a space available on the Monday 30th September if you are interested.
River Wye Barbel/Chub Guiding Days.

Each day l will guide two anglers for barbel/chub. All bait and terminal tackle will be provided, as will the cost of the day ticket (rods provided at no extra cost on request).
Based on two, the cost is £125 per person.
If you wish to book more than one day then a list of guest house in the area will be provided.


Barbel fishing on the Wye for 2014.
Watch this space as dates will be appearing soon for two day breaks including accommodation for 2014.
Posted by Unknown at 02:30