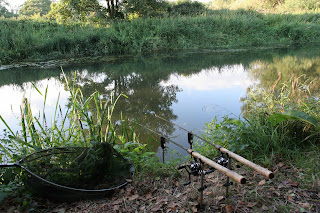 Saturday dawned and I realised it was my five year anniversary with girlfriend Denise so a quick visit to Tesco did the trick, well almost! I tried to find a card, however they were all titled, to our friends, on your, to my wife etc, no cards titled to my girlfriend so instead of this I had to go overboard on other gifts. Champagne - half price, flowers – buy one get one free and a meal for £10 which included a bottle of red, for me, set the scene yet after cooking and drinking I fell to sleep early, so all in all it was almost an anniversary to remember! Love you darling…

Sunday I headed to Wotton House on the outskirts of Dorking as I was the photographer for a friend who was tying the knot. Arriving at 10.30am and leaving some twelve hours later took the stuffing out of me, yet come 8am Monday I was on the bank of Badshot Lea Small Pond looking after a couple of youngsters, Luna and Nico. It was a rescheduled FAS junior teach-in yet the Helicopter rig that I wanted to show them just doesn’t work as well as the year progresses so a change of venue to Badshot Lea Small Pond saw them perfecting the art of using ‘The Pellet-Lead’. It was a shame that they were slightly late as just before they arrived I landed a common of 17lb 5oz which would have made their day. Whilst setting up another enthusiastic young angler, Ross showed an interest and joined in and come mid afternoon we had all caught a few carp and bream, making it a very rewarding day for all parties. I would have loved to have given them more time but I had a prior engagement that evening with the river that had given myself and Chris big barbel the previous week. Arriving late and after a long walk I found another angler fishing the swim l wanted so had to head downstream and target the carp, yet during the night and after no indications, up sticks and moved. All in all a lot of effort but I just felt a few hours in the right spot is better than a whole night in the wrong spot. Unfortunately my efforts went unnoticed as did Chris’s yet we both know that we are fishing a very difficult area, one that doesn’t give up their inhabitants easily. At least the carp and barbel areas were primed ready for another attempt shortly and come 6am we were both on the road to work.

After a few hours kip I met up with my good friend Jake Curry who I hadn’t seen for a while as he’s been busy studying for exams as well as having a working holiday in the Bahamas, luck boy! Today we were going to try our luck at floater fishing and with temperatures rising to 26 degrees and with no wind we instantly knew that we had made a wise decision, especially when a cruising carp slurped in a few floaters in front of the car park on the big pond. Heading round to the small pond we took a stroll around the lake, found most of the carp in front of a few swims and proceeded to feed them up before casting in. Five hours later we were heading home with twenty-one carp to our names, the biggest 14lb 5oz.

An early night Tuesday saw the alarm waking me at 5.30am and after a forty-five minute drive found myself meeting up with good friend Alan Clancey on the banks of a new stretch of the river Loddon as his guest. Alan put me in a known barbel hotspot, yet apart from a couple of chub bites that were missed the barbel failed to show and come 3.30am I was on my way to pick the girlfriend up from work. Alan moved into the swim after I left yet I haven’t heard from him so assume on such a bright day the barbel just didn’t want to play. It was a great day, albeit in conditions that weren’t conducive to catching and great to fish a new stretch of the river and I’m looking forward to another go later in the year when conditions are better and when I can fish all day.

After dropping the girlfriend of Thursday morning I headed to Stanford End for a day guiding a new customer. Fortunately we had arranged to meet later than normal which was good as it had been raining hard all night and as we meet the rained eased. It seemed most other anglers planning to fish the river that day were fair weather anglers as surprisingly the car park was empty. Heading for a known swim it took Steve around twenty minutes to receive a three-foot twitch from a barbel weighing, maybe six-pound, but it was a start. Soon after catching other anglers started to arrive and apart from one missed chub bite we were forced to move downstream. Just one other angler allowed us to move around, yet a couple of very productive swims, ones that I usually keep to myself failed to produce, however dropping his bait in a likely looking spot soon bought another bite, yet seconds after making contact, what was almost certainly a chub saw the hook pulling. Chancing a second cast saw another bite yet a repeat performance occurred and although we kidded ourselves it was another chub we both knew it wasn’t dam! Moving downstream we started to see other anglers set up and apart from a couple of small plucks that ere missed another barbel failed to show and with the light fading it was time to call it a day. I was hoping for a relatively early night yet it wasn’t to be as I had to get the tackle ready for another days guiding on Friday, this time at Broadwater.

Meeting Chris at 7am and taking a quick look at the lake gave us very little to go at regarding locating the carp, so I decided to set up along the road bank, an area that is rarely fished but almost always produces for me. Two hours later and with just one common to show for our efforts it was time to move, this time to the more favoured rugby bank, peg 12 in fact. Literally after priming the swim it took no more than thirty seconds for the alarm to scream. Come three hours later and with around a dozen more carp to 13lb being landed Chris left having learnt a very important lesson, don’t be afraid to move! It was more of a learning day of casting repeatedly and accurately, scaling down not just terminal tackle but also bait size and matching this to the feed. By the time Chris left he was catching far more than any other angler on the lake, had perfected the art of casting accurately and learnt some vital lessons in how to get the best from a venue, lessons and tips he can take forward to other venues and reap the rewards.
All in all a very busy, rewarding but draining week, yet with a long weekend planned I’m looking forward to being able to put my feet up for a few hours.