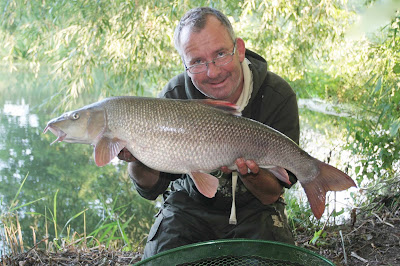 Saturday I checked out a new area of the Thames that one of the Nash anglers had mentioned during the Roadshow at Broadlands. The area is known for its barbel, yet last week I heard of a 7lb 5oz chub being caught and this week a 30lb carp so it looks like it holds everything we are looking for and with a couple of potential swims located I’m sure we will be paying it a visit soon.
Monday dawned and after getting on top of loads of wedding photographs I prepared the carp kit for a night under the stars, once again on the Thames. Chris arrived early afternoon and we headed up to Chertsey and Laleham for a look around, yet apart from a few good looking areas, nether of us was drawn to it so before the traffic mounted headed back to a new stretch on the middle reaches that I had checked out over the weekend. Picking a swim that had some pace to it below a weir we were soon sorted with rods out, however the only spectacular sensation that night was watching the Perseid Meteor Shower as come 7am when we wound in neither had received so mush as a bleep!
Somewhat disappointed and with the best part of the week at our disposal we decided after lunch to head to a new stretch of river and try our luck at barbel. Settling well away from each other in swims that looked the business we both fished pellet up until darkness then cast another rod out for eels. I instantly knew my swim contained fish or a good fish as a liner indicated its presence after just twenty minutes yet I had to wait a further five hours till the tip pulled round and after a hairy fight in such a tight swim I finally managed to slip the net under a very big fish. In the net she looked like it might beat my best but on lifting I knew it was well short, yet weighing 14lb 7oz it was a great result and my best barbel for a couple of years now. The rest of the session past without any further action, yet as they say, all you need is the right bite to put you back on the confidence road.
Back at home I quickly fired a couple of images to Tim at Anglers Mail before once again shifting through wedding images. Can’t wait till Thursday as we will be back for yet another session. 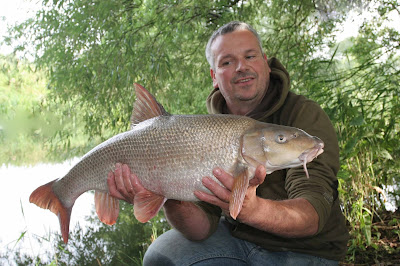 Thursday came and with wet weather forecasted to move in at around 2am on Friday we decided to head back to a known carp swim on the Thames. Instead of going looking for the carp we have decided to settle on one spot that produced lots of carp in the past for me and will be trying to fish the swim once a week from now on as well as also topping it up once a week. The session couldn’t have got of to a worst start as on arrival I was distracted by someone asking about the fishing. Not wanting to bring attention that we were staying the night closed the boot of the van as not to reveal the bedchairs but on doing so heard a nasty crunch. What had happened was my rod holdall had slipped whilst resting against the van and had come to rest on the boot and on closing the boot one of my butt eyes of my new Nash Entity’s was crushed. I managed to use the rod throughout the session but although the eye was less it’s ceramic and wasn’t sharp lived in fear of hooking a carp! Later that evening my barbel spoon snapped on me before the catapult elastic went. Not a great start but I struggled on. The swim we wanted had a massive wasps nest in that had been recently burnt and with some aggravated wasps flying around had to settle a few yards upstream. Arriving at around 3.30pm we weren’t expecting anything till dusk yet as soon as I fired in a few boilies the swim came to life, unfortunately they were from bream that were rolling everywhere. Luckily our baits, 15mm/10mm snowman rigs went unnoticed for a couple of hours, yet come darkness more than half a dozen had dropped in our nets, so out went the double 20mm baits! This quietened things down and with what was almost certainly a carp crashing upstream we dozed of in anticipation. 2am the rain started and after swinging the oval to stay dry I felt that the big hookbait might just be too big so changed to single 20mm yet come morning just a few bleeps had come our way. We feel we are getting closer so after baiting up with around 3 kilos of pellet and boilies headed home with a return trip planned for Monday night.
Another day in the office before returning to our new found barbel swim, but tonight it would be Chris who would be trying to tempt a monster. As for me I still had river carp on my mind and headed of downstream, finally settling on a swim fringed with lilies on the far bank. Movement in these soon revealed my position was spot on and soon after casting out a common stuck its head out, yet the night past without incident but not for Chris as dawn broke he was requesting some photos of a barbel weighing 11lb 10oz. For me it was like catching another monster as this week we have put in plenty of hours and hard work searching the river for big fish and I desperately wanted Chris to catch something special.
All in all the week has proved just how searching for big fish can go. We spent four nights spent on new and old areas which have a track record of producing monsters. One bite is all we were looking for and luckily we both received one. That’s all it takes to turn a week from being a disaster into a remarkable one. This week we have found a swim that contains big barbel as well as two that contains carp and its now up to us to educate the carp into eating our boilies before returning and being rewarded.