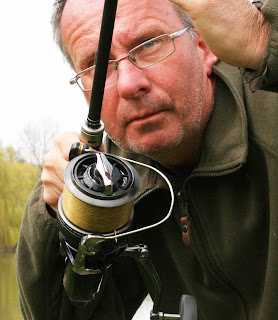 The skies the limit!
Tried by DUNCAN CHARMAN 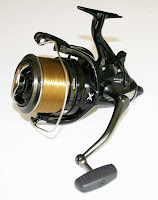 Well aware that I was awaiting a parcel containing the latest Shimano Big Baitrunner, I was somewhat shocked when the parcel arrived, why, it just wasn’t heavy enough. At first I thought that someone at Anglers Mail Head Office had taken the reel out of the box for a sneaky look and forgot to place it back, but I was wrong. Weighing just 640(g)/22.6(oz) I instantly knew that this was the first big pit reel that had ever felt comfortable in my hands, as although big, its weight balanced its size perfectly and the reason for its lightness is due to the C14 construction which massively reduces weight.
Eager to put the reel through its first proper test and with an overnight session planned the following day at Westhampnett I loaded the reel with Nash 12lb Hardcore, rigged my Entity 2.75lb T/C rod up with a 2.5oz inline lead, short braided hooklink and headed south. With the easterly wind dropping temperatures to -5 overnight my first thought was would the oil in the reel freeze, something that often happens with cheaper reels, however I shouldn’t have worried. Having chosen my swim, I was faced with a strong side wind as fishing into the teeth of it wasn’t a consideration. Depositing fifty balls of groundbait at range into the main body of the lake, via a sling-shot, I marked the lines on all rods and clipped up. Moulding a good helping of method mix around the lead, increasing the weight to around 5oz, I compressed the rod and let rip, however I soon realised that I was struggling with my standard reels, yet when I bent into the rod with the Shimano reel attached the line clip was easily hit, straightening the line perfectly in the cross wind. I was fishing at what I thought was my limits, but for the first time ever, knew that my limit had been completely controlled by the reels I had been using. To be honest I wasn’t expecting anything but come morning six double figured bream had graced my net, five to the Entity and Shimano combination! The reason I struggled on the other rod was due to dropping short every time. How I wish they had sent me a pair! It was also during the night that I noticed the blue and silver flashes that are impregnated within the stylish black body, something that’s not noticeable straight away. 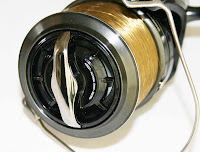 I wanted to see just how far l could cast so decided to head to my local football pitch. Trying to get a realistic distance I kept the 12lb line as used in the earlier session, just attached a four ounce lead and compressed the rod. Before revealing the distance I have to say that I have never seen line lay on a reel in such an immaculate fashion, it was simply perfect. Not being the biggest and strongest of guy I have always felt that 100 yards was my limit but with the Shimano C14+ XTR-A LC, I constantly hit 130yards, sometimes further. If a professional long distant caster rigged up correctly with a shock leader and more powerful rod then, to be honest, the skies the limit!
Back at home I decided to check out the specifications of the reel and impressive is an understatement! Gear ratio 4.6:1, line capacity 12lb line 600yards, Unsurpassed X-ship technology for an ultra smooth feel and enormous cranking power, 6 shielded A-RB and 1 roller bearing create a super smooth retrieve, Aero Wrap 11 combined with Slow Speed oscillation for perfect line lay, AR-C spool for increased casting performance, one piece bail to eliminate line wrap, instant drag spool for instant fish playing control, an amazing 32 lines of lay per oscillation, spare spool and free line plus a reliable line clip. I could go on but I haven’t got the space! 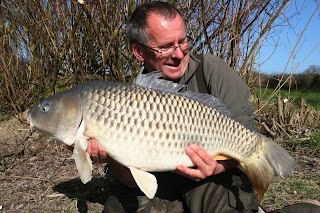 The last test was to get a take from a carp that took line initially of the baitrunner then the clutch and a local day ticket venue produced my first twenty of the season. My only concern is the amount of turns it takes to adjust the clutch through its settings. When tightened right down it takes at least three complete rotations to get the clutch slipping, then a further two to loosen right of.

IN A NUTSHELL
As close to perfection as you are going to get when distance is an issue, yet said that, it still feels superbly balanced in all angling situations even when distance isn’t an issue. Brilliant engineering comes at a cost, yet if looked after, this reel with give you years, if not a lifetime of reliable service.
RRP PRICE. £349.99
VERDICT. 9.5/10