Sue bought her husband, Allan a day’s barbel fishing with me as a birthday present and what a day it turned out to be. Allan hadn’t fished the river Loddon for a number of years, as he moved to France some years ago, however whilst visiting family here we managed to arrange a date to coincide with this visit. 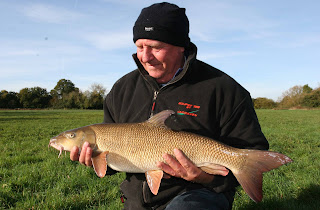 Meeting at 7am and with barbel on our minds we headed straight for a banker swim, however this had changed somewhat over the past couple of weeks, due to the heavy rains and although called the jungle, now resembles a battle field. Dropping a bait in we sat uncomfortably as we knew that if a fish was hooked then the favours of an escape was heavily stacked in its favour and come thirty minutes later, and after a couple of taps we remained fishless. Moving to a swim upstream Allan soon learnt the importance of holding the rod, or covering after a tap, as the tip flew round and somehow the bite was missed. Reeling in Allan found a minnow impaled on the point of the hook, a very unlucky situation as it seems a barbel had found our bait, sucked everything in, including the minnow probably and the masked point failed to hit the mark. With two productive swims covered and just one left we headed downstream and soon after settling in Allan found himself attached to an angry barbel that did everything in its power to avoid capture, yet constant pressure did the trick and a big barbel surfaced. It was a typical Loddon barbel, short and fat and hopes of a double were soon realised as the dial settled on a satisfying 10lb 5oz.

By now the early morning mist and light covering of frost had made way for warm sunshine and as we headed downstream we were greeted with spectacular views of the English wildlife including Deer, Buzzards and Red Kites. The next swim failed to produce but the boundary swim didn’t disappoint as first a strange looking personal best chub of 4lb 14oz was netted before hope for the future in the form of a barbel weighing around 3lb 8oz.

On a high we covered plenty more swims, yet the tip remained motionless. More anglers were turning up and heading right upstream we dropped into a known chub swim which yielded another of 4lb 12oz. The final swim failed to produce but with the light fading and the night-shift arriving we headed home, well happy with four fish from a difficult river.

If you want a days fishing with me and are lost for ideas to give the wife for Christmas or you’re birthday, then why not pass on my details, you never know you might just have a red-letter days like Allan had.
Posted by Unknown at 05:20