The Lure of the Zeds 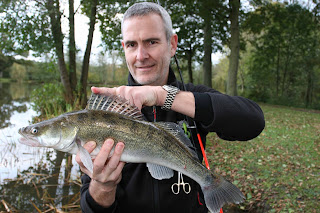 When Mat Vickery contacted me with the intent on catching his first ever zander, l thought, Old Bury Hill, October, no problem, however Mat is a very keen lure angler and his intension was to catch one on a lure.
I must admit l have watch others anglers lure fish and have never seen much joy, especially on the zander front, however I was keen to watch how a good lure angler retrieves. Unlike how must anglers fish, mat retrieves very slowly, not unlike ‘sink and draw’ fishing for pike and was soon into a fish, albeit a pike. A few more hits were missed before the thumbs up came and Mat landed his first ever zed on his preferred method.
As the witching hour approached the next method, sardine sections hair-rigged started to get some attention and it was long before the first zander fell, one of around five pounds. The action then increased and come 8.30pm around another dozen had been taken, the best maybe 7lb, oh, and another bream!
Obviously the cold snap over the weekend has encouraged them to feed and come later in the week when the atmospherics are meant to fall; one lucky angler might just find themselves having a red-letter day.
Posted by Unknown at 05:17