Itchen to get at the Ladies 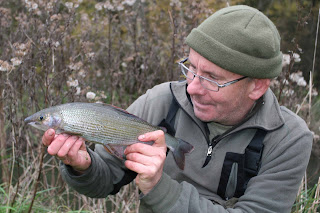 Although l have helped numerous angler have a memorable day on the Lower Itchen Fishery, l have never fished it for myself, so with a Coarse and Match Fishing Monthly video requested by OnlineFishing.tv on grayling fishing, l grabbed the opportunity with both hands.
Arriving at opening time, 8am, l found l had the stretch to myself and headed for the centre of the fishery, an area Clayton the onsite river keeper had pointed me to. Starting on the float l covered loads of swims, catching from all but two and come 2pm l had lost count of the grayling that ld landed, along with lots of brown trout plus a couple of salmon parr. The last swim l fished on the float saw loads of grayling intercepting loose maggots, however bites were difficult to come by, that was until l made a tiny alteration to my hookbait, thereafter it was a pound plus grayling a cast. 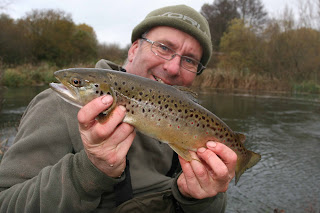 Once the rain arrived l decided to head to a big pool upstream, one that is almost impossible to fish on the float and try the feeder, something l will only do in such a situation. It took all of ten seconds for the tip to twitch and the first of many brownie of see the bottom of the net. Although two good grayling did find my bait, plus a sea trout, it seemed as if the grayling pool had been invaded by brown trout and after around a dozen or more, and with the rain beating down, l headed for the comfort of the car.


The video will be edited and ready to view soon, so keep an eye out on www.coarseandmatchfishing.com for one of many of my ‘In Session’ with Duncan Charman videos.

If you fancy experiencing the fantastic non-stop rod bending action The Lower Itchen Fishery offers then why not book a day with me. You won’t be disappointed!
Posted by Unknown at 06:24