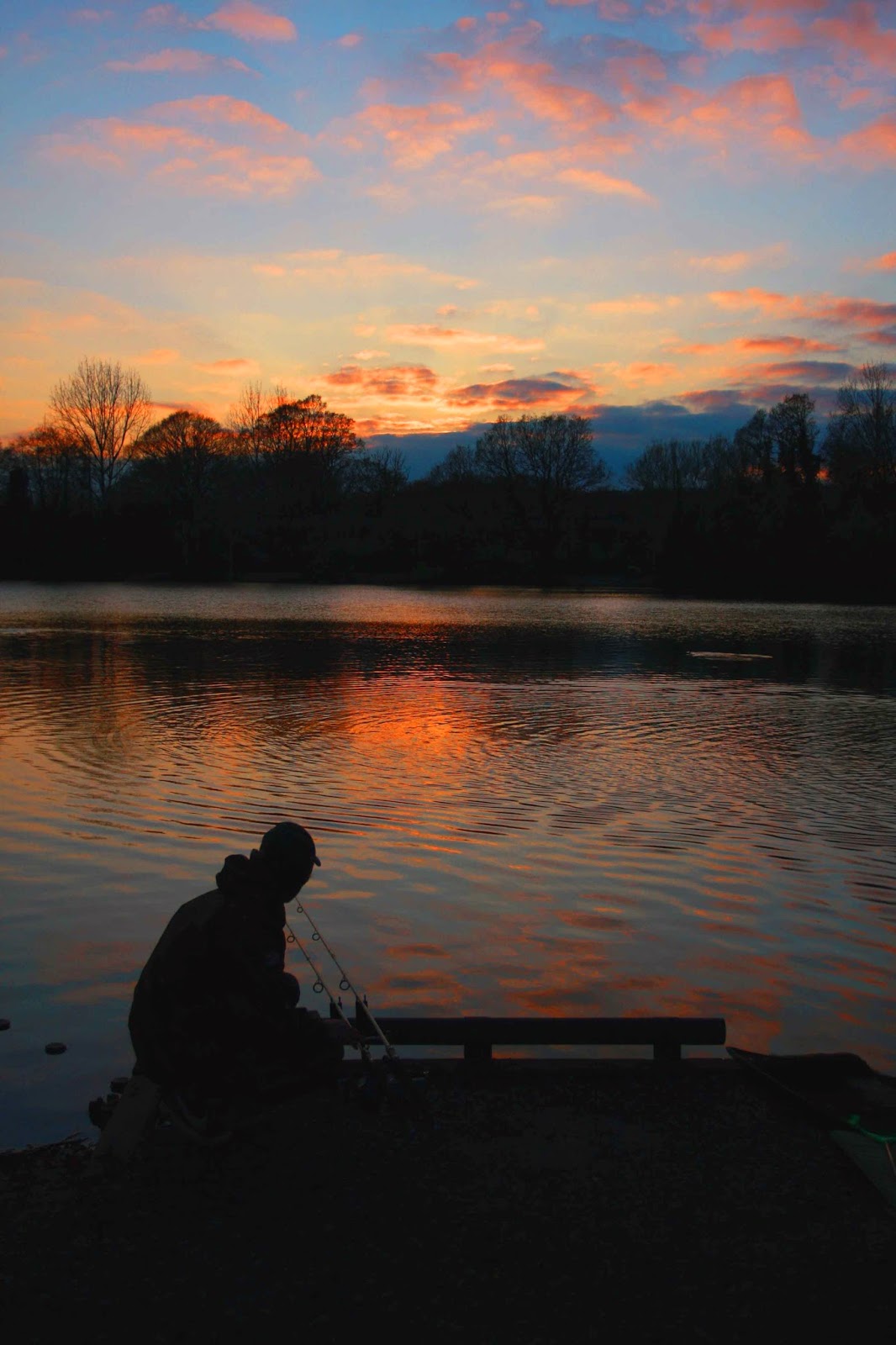 My last article mentioned that my initial thoughts on bait application and tactics for tench would change and from the first couple of sessions you will see that this has been the case, however before progressing lets me tell you what we found about the lake when we visited it with a feature finding rod.

Due to the cold easterly wind that constantly blew throughout the start of April we decided to head to the venue late one afternoon as we felt spotting fish at dusk would be more likely. There were a few carp anglers set up and as expected they were on the far bank, an area that we had already decided to avoid as the less busy bank would hopefully allow us to bait and fish swims on a regular basis without being disturbed. Their was one carp angler on our preferred bank and as soon as he knew we were interested in tench was extremely forth coming with information revealing that his best from the venue was 11lb 4oz. He also told us that the water held few small fish (complete rubbish as it turned out to be. We called him Billy, Billy bullshit!) which was encouraging as this meant my preferred method, the Helicopter rig and maggot looked favourite. One of the best ways to find out about a new venue is to talk to other anglers, some might not want to give too much away but others, like this angler can reinforce what you need to know, in this case that tench the size we dreamed of lived in the water. One thing that was noticeable straight away was that the water level was very high, in fact many swims were under water and un-fishable, yet a few did allow for a shelter to be positioned, even if it did mean having to take wellies to fish comfortably.
These swims were all checked for features, yet the egg box bottom we were expecting wasn’t what we found. Instead the swims all showed a deep margin averaging six feet before shallowing up at around twenty yards to as little as three foot before slowly dropping away to seven feet at around fifty yards. The bottom was choddy with plenty of dead leaves and weed as well as some shooting weed, but certainly not un-fishable and at its shallowest point the bottom was clean gravel. We both agreed that the margins needed to be explored and one of our three rods needed placing here, whilst the other two would be fished at the back of the gradual sloping bar where gravel gave way to silt, an obvious collecting point of food and a likely patrol route for fish. The gravel would be left alone for the time being as with the water still cold this area would hold little in the way of natural food, well at least until the water warmed up. As I was working in a team with my fishing friend Chris it’s a good idea for both anglers to feature find a swim before comparing notes as this once again reinforces what’s exactly in front of you. Having located a couple of swims that we were happy with we clipped up the marker rods before spodding out a couple of kilos of mixed hemp, dead maggot and boilies, just an appetiser to encourage a few fish into the swims before our first planned session in a few days.

Working in Pairs.
Approaching a totally new water is best done in twos as both swims can be baited, even if we not both fishing. In fact, apart from the first session, our plan in the first few weeks was not to fish together, preferring to fish alone, a couple of days apart, as this would keep the feed going in both swims, as well as the added advantage of each of us keeping an eye on the water, trying different approaches out, generally sussing the place out twice as quick. Instead of taking two marker and spod rods with us each time, we simply walked each one out in the car park before placed two elastic stop knots on the line which would show the distance each of us would be fishing in the different swims. Another advantage of fishing on different days was if one swim happened to be taken then the other could be fished.

Arriving mid afternoon on a Friday we, as expected found most carp anglers on the far bank and with both our chosen swims vacant we simply cast out the marker rod before spodding out a mixture of hemp, maggot and boilies. The spod was chosen over the Spomb simply because it gives a wider spread of bait. With three different set ups on the rods this session was more of an experimental practice than a fish catching session and we both agreed if a fished graced our nets it would be classified as a bonus. The first rod I cast out was my confidence rig, the Helicopter rig with two real maggots popped up with a sliver of foam. Sinking the line and setting the bobbin I turned round only to hear the alarm sound and found a two ounce rudd attached, joy. The next cast saw a repeat performance as did a cast in the margins, time for a rethink. After depositing plenty of dead maggots in the swim I decided to replace the Helicopter Rig with another inline feeder and plastic maggot hookbait. The next problem I found was when placing a boilie stringer to the hook and dropping it in the margins. I always watch what a rig does before casting it out and the PVA tape took ages to dissolve, twenty minutes in fact, which did little for my confidence. Eventually all rods were cast out, yet after repeated casts throughout the night nothing happened. Chris had also drawn a blank, yet on a positive note we were eliminating certain things that wouldn’t work and making the odd mistake, which lets face it is the best way to learn.
Chris returned a few days later and had replaced the Helicopter rod with a corn stack and was now moulding groundbait around the lead and fishing method-style, yet his second session also drew a blank but at least he had baited my swim as he left the following morning.
Another plan was to fish quick overnight sessions during the week, in between work until a few tench started to show, only then taking time of work and putting in longer sessions that would cover what is often considered better for tench, daylight hours, and then these sessions would probably cover two days and one night.

My second night coincided with a night of constant rain. It was what I classify as the turning point from the very cold start to April to the warming air crossing the country as at 1am the wind swung from a north east to a south west. I had changed the feed I was introducing, less hemp and dead maggots and more boilie, some of which had been crushed. I had also added a few micro-pellets which I hoped would break down quickly and add to the draw factor of the mix. These tiny pellets had also been included along with a few whole and broken boilies to small, quick dissolving PVA bags which were attached to the hook. All three rods were now fishing small 10mm boilies fished in slightly different ways and on slightly different rigs. The encouraging factor on this night was that a couple of carp had been seen crashing further out as well as a few liners coming later in the night, yet I had to wait till first light for the critically balanced boilie tipped with buoyant corn to spring into life. The bite wasn’t what I expected with the bobbin falling to the ground and as soon as I picked the rod up I knew a bream was attached. At 10lb 9oz it was a fantastic fish, yet how I would have loved for its flank to be green and its eyes red. My third session, again an overnighter resulted in disaster as around midnight the critically boilie sprung into life and whatever was on the other end certainly wasn’t a bream as it was far too powerful, yet half way in the hook pulled and I was left crouching in darkness with my head in my hands. A tench did fall later that night, only a small one, but all I can remember is the loss of what could have been a fish of a lifetime.