With summer turning into autumn my tench campaign has come to an end, somewhat prematurely though. Read on… 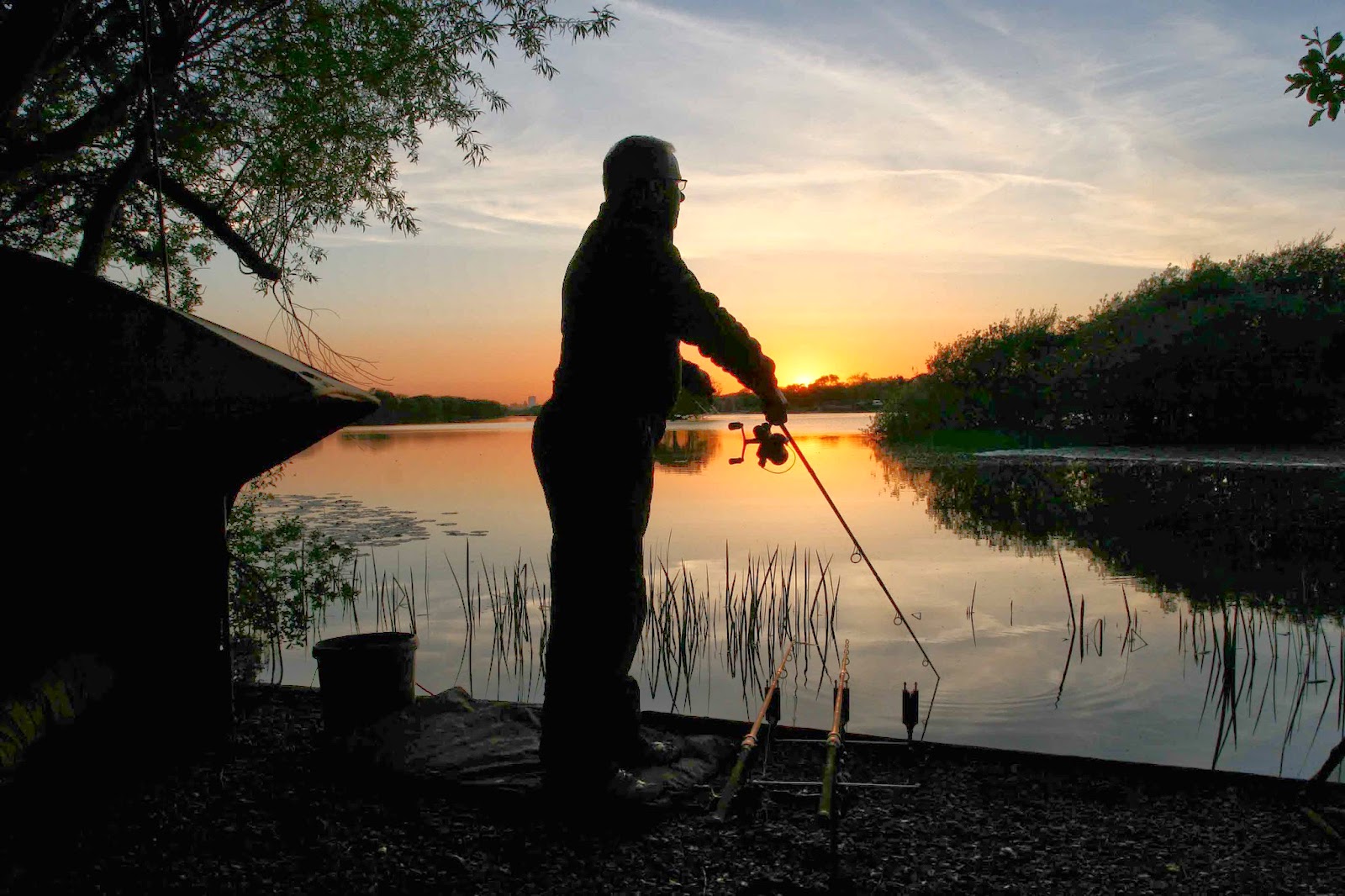 The research and complexity of finding a venue for a summer tench campaign was documented in Part 1 of this mini series back in issue 141 of Coarse Angling Today. The following month Part 2 documented our initial feature finding sessions and plans for the future with Part 3 showing the vast amount of thought that has to be applied in order to fine tune rigs and bait application to deal with problems that occur along with a risk taking exercise that finally paid off.

The introduction of groundbait and plenty of it had unlocked the lakes secret in attracting tench into our swims and every night we fished saw tench landed along with the odd double figured bream and twenty-pound carp. Things were looking good and all the pieces of the jigsaw were falling into place. The weather was warming up, albeit someway behind the standard yearly schedule and with the tench beginning to feed in earnest as they built of reserves for the yearly spawning ritual we were sure that our target, a double figured tench would make an appearance.
Once again the car was loaded with kit, groundbait mixed and the hour journey south got underway, however on arrival at the fishery my heart dropped, as on the gate was a sign saying ‘Lake closed, carp spawning’ along with a reopening date which was some weeks away! I could have cried as hundreds of hours had been jointly invested in this project only to see what was surely the best time to catch big tench, June, almost entirely removed from the campaign. In short the car was turned round and to date I haven’t returned. Will I be buying a club ticket next year, definitely not!

On the way home I informed Chris to our problem as a plan needed to be made and fast. After parting with the best part of two-hundred pounds neither of us wanted to purchase another expensive club or syndicate ticket, not for just three weeks anyway and as we were both members of Farnham Angling Society finally descended on my favourite venue, Frensham Great Pond. Chris had never fished the venue so I had to inform him that the chance of a double figured tench was slim, yet numbers of tench in the five to eight-pound bracket was a dead certainty and with a very good chance of a few big rudd thrown into the equation it seemed the perfect place to drown our sorrows.
Unlike the south-coast venue, small fish weren’t a problem and my first choice set-up and more conventional tench tactics, the Helicopter rig could immediately be employed. Straight away I felt happier using 1.25lb test curve rods and 6lb mainline. To be honest the previous water had so many small roach and rudd in it that we were actually fishing carp rigs for tench, which although had to be done to overcome the problem, wasn’t really what I prefer. As I said in Part 1, ‘Catching by design has always been very important’. 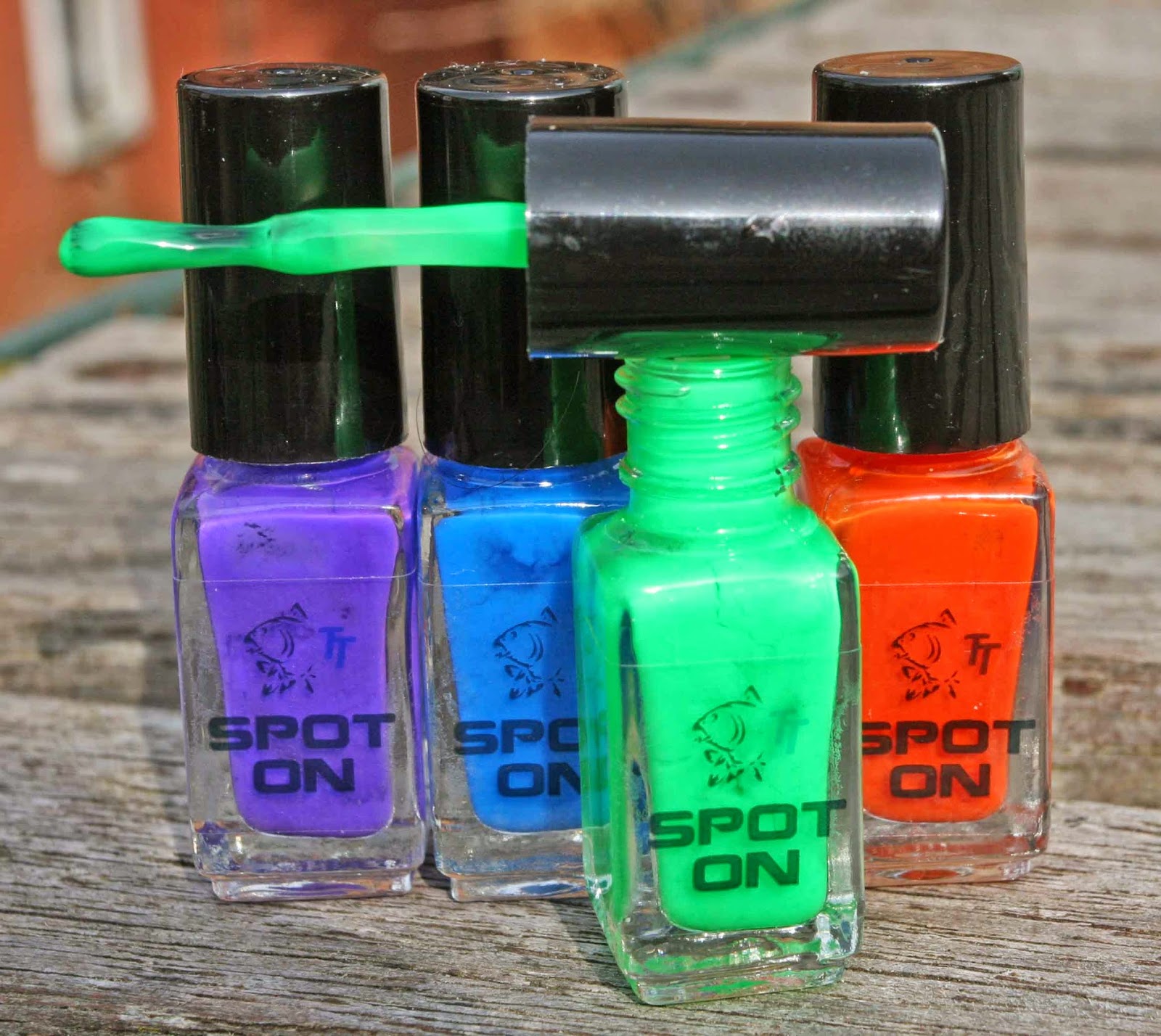 Having a passion for big rudd, yet knowing tench were the main target I had to resist using waggler tactics and sprayed maggots so stuck to the helicopter rig on my first night which resulted in twenty-two tench, the best 8lb 1oz along with three two pound perch.
This first nights catch was taken along the bridal path, an area I know well, yet with over sixty acres to go at, and wanting a change of scenery I decided to head to the road bank from then on as this, I hoped would at least give me the satisfaction of getting to know new areas of the lake more intimately. This area of the lake is somewhat more challenging as it’s far shallower and instead of wading out ten yards I found myself some thirty yards out then punching a feeder another fifty or more. Clipping the line in the reel clip and marking the line is paramount and soon I found myself having to buy new Shimano reels as the line clips on my previous cheaper models were to say the least, poor! The pole elastic that I tied as distance reference marks also had to be rethought as if I didn’t make sure this was at the base of the spool before recasting it would catch, resulting in the feeder dropping short and maggots being spread over a wider area than what I wanted. The answer came with Nash sending me some Spot On line paint which instantly removed the problem and now using reels with a baitrunner facility rather than a front adjusting clutch, fishing at this range became so much easier. 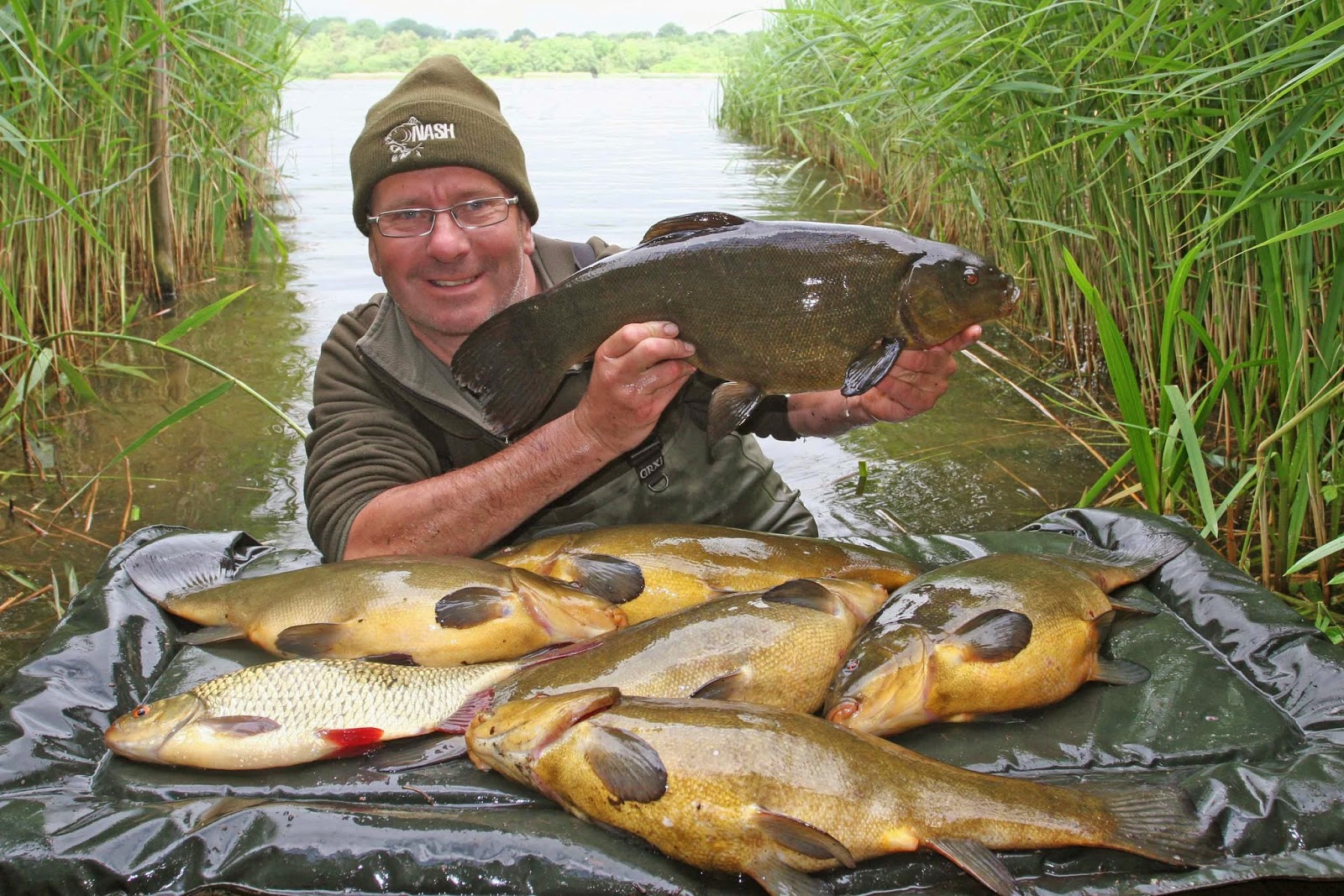 Feeding at this distance was a bit tricky, especially knowing the tench loved groundbait so at the start of each session I would place a marker float at the desired distance, cast and clip both rods up to this, wade out as far as I could in chest waders, before throwing in a few dozen balls created from the brilliant Nash Deliverance Ball Maker accurately by hand. This activated the swim and from then on it was simply a case of removing the feeder from my rods and topping the swim up using a small spod filled with fine groundbait and maggots every time it went quiet.
I even tried another tactic that I thought would work, that being a big inline maggot feeder, short braided hooklink and plastic maggots on the hair, however, surprisingly this seem to catch more two-pound rudd than tench!

Knowing that the tench would soon go into spawning mode and become far more tricky afterwards, we put in numerous sessions over the next few week, ones that would have been done on our original choice of venue if allowed and during this time took loads of tench, in fact my results show that I landed over eighty tench, eighteen two-pound rudd and five two-pound perch in just seven sessions. Chris’s results were similar with the icing on the cake being the capture of a personal best rudd of 2lb 9oz.
Float fishing did come into the attack, especially at dawn, as watching the red tip of a float bobble amongst an area of fizzing bubbles before disappearing has to be one of anglings finest moments and for me the highlight of the campaign was slipping the net under a float caught eight pounder. 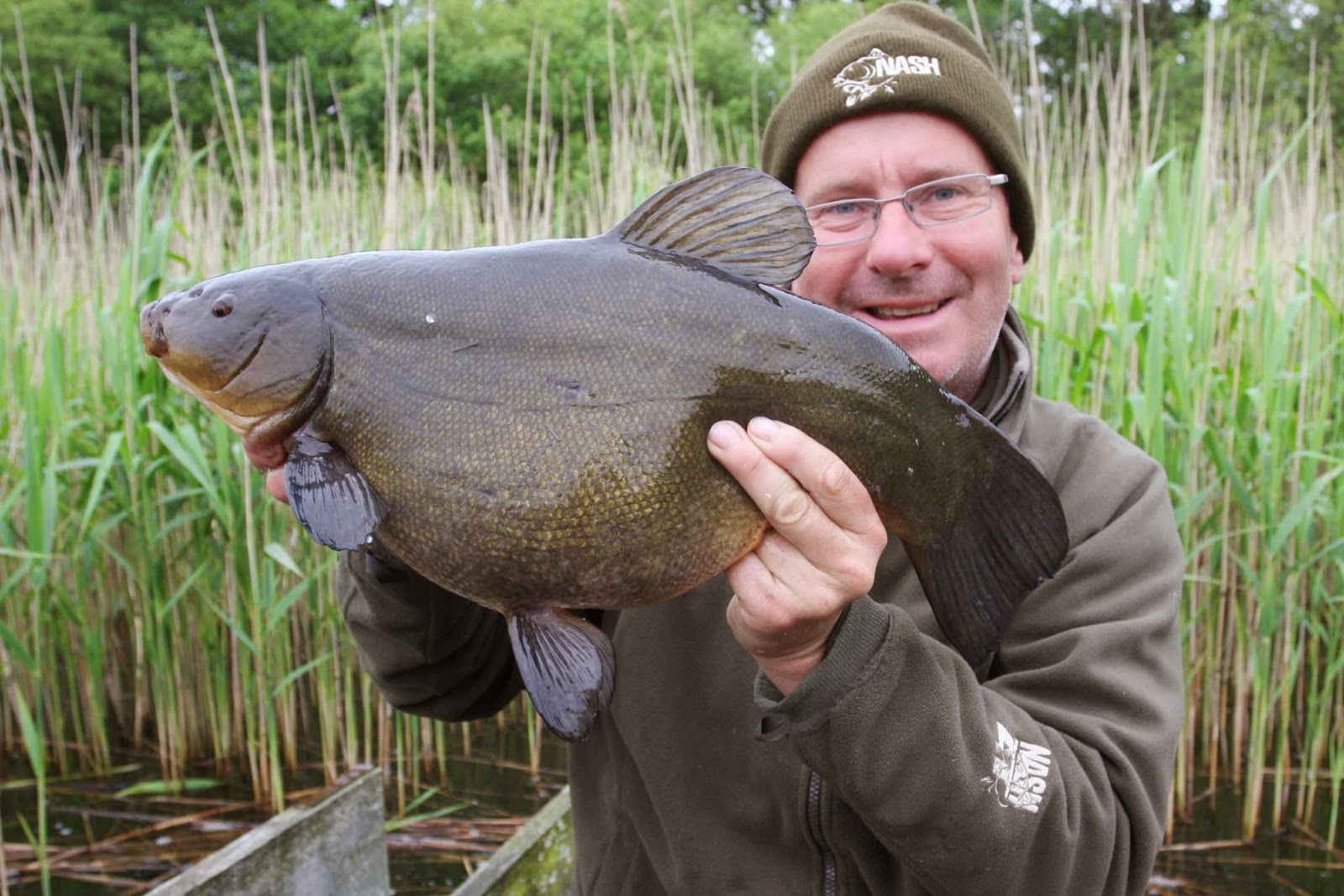 Looking back, this spring and summers tench campaign has been what can only be described as the ultimate learning curve. Different venues have meant having to adjust accordingly and although the initial disappointment of having the carpet ripped from under our feet after such a painstaking time researching a new venue had to be swallowed, I don’t feel that it’s been a waste of time, in fact the opposite. Yes the double figured tench never saw the bottom of my landing net, that part of the puzzle was out of my control, yet by being able to adjust to an ever changing situation has only made me a better angler, one that will be treading the path of a new venue next spring.

Images for article –
Image 1 - This was my last evening on the tench lake.
Image 2 -Tench paradise, not for long!
Image 3 – This image for Part 1 shows just how our initial tactics on the first lake failed yet were the best on the second venue.
Image 4 – Nash Spot On has solved many problems.
Image 5 - Part of a twenty-two tench catch.
Image 6 – Chris with a seven pounder.
Image 7 – An eight on the float.
Image 8 – The Nash Ball Maker now comes in four sizes and with a slot down the side.
Posted by Unknown at 02:57