Last year l had a hunch that a day ticket water in West Sussex might just throw up a few monster eels and a single overnighter back then produced four eels, including two fours. I was eager to return and with the weather taking a turn for the better, along with a spare night available, headed back full of expectation. 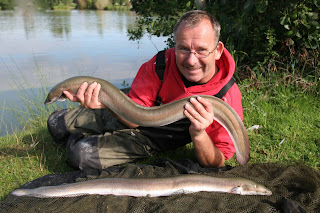 I had spent hours making sure that everything was in order and as l cast out in the same swim knew that things were about to happen. The standard home made drop off indicators were set really light and as l clipped the mainline within waited for the KBI alarms to sing. Everything looked perfect, small fish dimpling the surface and an abundance of insect hovering in the humid evening air. Ten minutes past before something found my prawn hookbait to irresistible to refuse and as the clip dropped to the ground, line poured of the spool of my KZR Mini Pit 6000. Leaving the run to develop for a few seconds l finally engaged the bail arm and swept the Korum 2.75lb carp rod back, and when the rod took on a healthy curve and line started leaving the spool, due to serge forwards and a series of jagged headshakes, l knew exactly what was hooked. My huge triangular landing net takes no prisoners and in the first eel of the night slipped, a specimen weighing 4lb 4oz. Over the next hour three more runs were encountered and considering it wasn’t yet dark l had high hopes that this was to be the eel night l had dreamt of, especially as one of the runs produced another big eel, this time 5lb 5oz. 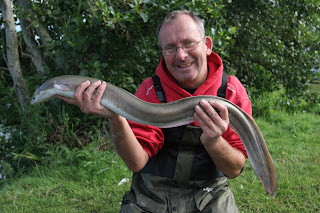 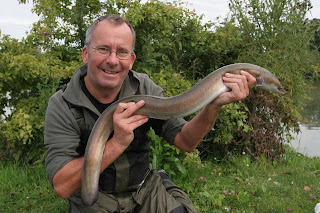 The action slowed after dark, however at 1.30am the swim came to life again, however disaster was looming in a way l had never experienced before. As the run developed l watched as the line twisted creating a mini bird’s nest, before jamming one of the rod eyes, causing resistance and resulting in the run to be aborted. Thinking it was a one of l recast only to witness a repeat performance occur moments later. Knowing these runs were from big eels l decided to sit next to the rods and as the line pulled from the clip, grab it and feed it slowly of in the hope that it wouldn’t twist, however this practice failed. Next option was to set the clutch as light as possible, however the next run was aborted soon after taking off, as was the next. All the runs were coming of one rod cast to my left so l decided to switch my rods over, this seemed to work as the next run saw a hooked eel, yet moments later the hook pulled. Another run was soon happening but amazingly l watched as this line coiled, twisted then jammed in an eye. Desperate at landing another and with the skies beginning to lighten l even tried striking immediately, yet this failed. Stripping yards of line of each reel, l recast both to the left and as the next run developed struck momentarily feeling a fish before the line parted. I can only assume that either the line twisted creating a weakness or it caught one of the eyes, whatever it was it signalled the end of a very frustrating night, which really should have been a red-letter session. Amazingly the line was relatively new, used only a couple of times without any problems. I can only assume that either l had purchased a bad spool of line or when l had used it before, whatever it was l was doing had stretched and weakened it, however whenever it was, when part of my tackle lets me down l never use it again and as soon as l got home l binned the line, replacing it with a braided version. I just hope that this wont let me down when l return very soon.