Image 1 – The biggest of twenty two!


Although l couldn’t concentrate fully on this week’s session, due to producing a feature at the same time for Anglers Mail, it was good to get out and fish Godalmings Broadwater Lake, a venue steeped in angling history and a serious runs water. 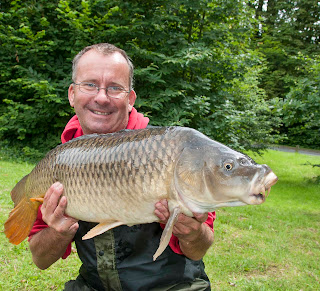 My dad had joined me, it was the first time we had managed to get out together for ages, and with this in mind he was content with casting out PVA bags of pellets, the standard tactic for the water. However l wanted to work my swim and had decided to fish the pellet lead, casting every fifteen minutes or so. After casting out a small Spomb loaded up with scolded 2mm, 4mm, 6mm and 8mm Sonubaits pellets, l clipped up and placed a pole elastic stop knot next to the reel and repeated the process a couple more times to prime the swim. Removing this l simply tied the rig onto the mainline which consisted of a running 1.1oz Korum K Grip Inline lead and a eight inch braided hooklink containing a size 12 Xpert Power barbless hook, tied knotless knot style leaving a short hair onto which l placed an 8mm Sonubaits S-Pellet tipped of with a tiny piece of buoyant yellow corn. Repeating the process with the other rods it took no time at all to have the swim prepared and it true Broadwater style it took just a few minutes for one of my Korum Neoteric XS 12ft Twin Top Power rods with the 2.2lb tip to burst into action from a standard scrapper double common.
In between photos and organising products for the photographer l was kept busy with numerous more commons, however even thou dad was casting far more frequently than most other anglers around the lake, his swim was uncharacteristically quiet. Dads set up was slightly different to mine. Apart from using PVA bags of hard feed pellets that were all somewhat smaller than his 11mm hookbait, he wasn’t to bothered about clipping up and hitting the same mark every time as in the past he still gets loads of runs, however today, the fish obviously wanted a tight bed of bait and when the rains came after just five and a half hours fishing he had landed just two carp compared to my twenty two! Id fished the same swim the day before and managed around a dozen carp in just three hours, all mirrors, so was surprised that all my fish were commons during this session, the best going 19lb 9oz.
This sort of session just goes to prove that by inserting some thought and effort into your time on the bank can reward you big time, yet if your quiet happy casting PVA bags around and sitting back, well you might be waiting far longer than needed.
Posted by Unknown at 07:16