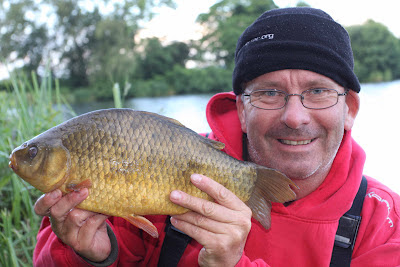 Having not fished for myself for over a month it was great to be back on the bank with little else entering my mind apart from catching a few fish. I could have gone for the hard option and headed to a venue with eels on my mind or the easy option and headed to Harris Lake on the Marsh Farm Complex and pulled out tench and crucians all night; however it was the lake that nestles in the sloping hills next door, Johnson’s that l finally decided on.
Arriving late afternoon l managed to settle in between some other anglers and have the rods fishing come 6pm. A few fish were moving, albeit at around 30yards, and with the anglers around experiencing bites but no hook ups at this distance felt confident that the crucians would finally move in later in the evening.
I normally fish the float on this venue but with heavy rain forecasted l decided to tackle the venue with more specialist rigs. My rods were Neoteric XS 12ft Multi Quivers with the 1.5lb tips added, replacements for Korums fantastic Precision Multi-Feeder, which were teamed up with the new CS3000 reels which were loaded with 7lb Reflo Direct Mono, a low stretch mono that would show up any movement from crucians in the swim? On the mainline l threaded a 1.1oz K Grip Inline lead which ran freely on the line and buffeted by a Quick Change Bead onto which a four inch hooklink was attached made from 6lb fluorocarbon supporting a size 16 Xpert Hook which had a tiny hair from it which would hold a cut down piece of sweetcorn.
Squeezing a good helping of sieved Sonubaits Supercrush Green around the lead l simply swing this out, set the clutch and attach the bobbins. Although l wanted to sit back and relax, fishing for me is far from relaxing as l feel the need to work the swim at all times, so a routine was embedded in my brain to reload the lead and cast every twenty minutes. The first twenty passed without so much as a knock and l started to feel that the bulk of the fish were further out in the cover of the weed. Soon after a recast the clutch screamed and what was on the other end headed for the centre of the lake with myself struggling to gain any control and eventually the hook pulled. A four pound tench followed then at around 8pm the indicators started to lift and fall, a sign that the crucians had arrived. It was long after this that the indicator started to dance in familiar crucian fashion and the first of four graced my net. Unfortunately the crucians are down in weight after spawning, yet in the middle of summer last season a 4lb 8oz beauty was recorded twice, so you never know. The four crucians l landed weighed 2lb 2oz, 2lb 8oz, 2lb 13oz and the best exactly 3lb, a fish of a lifetime for many. Amazingly the action quietened down after dark with just the odd small tench falling and come 11pm when the heavens opened and having exhausted a bag of groundbait l left having taken eleven fish in total.
It’s good to be back!
Posted by Unknown at 00:25