Conditions just to good for Barbel

Today was my first time on the river bank since the season started and although it was a guiding day, l was hoping to cast a line sometime during the day.
Last winter myself and Kevin had fished a half day for chub, however l knew that barbel were his target, so decided to split his birthday present, ‘a day with me’ that his wife had bought him, into two half days so he would stand a good chance of hooking one when the conditions were more favourable than a freezing winters day. 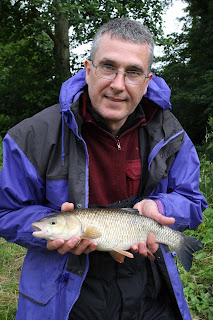 Unfortunately this summer wet weather has meant that barbel can feed whenever it suits them, and predicting when these feeding times are, is almost impossible. To be honest l would have been happier arriving in low clear conditions, as then, at least l know the barbel aren’t sitting up with a full belly and lowering a tasty morsel in a known hotspot can often bring with it a reward. Today thou the river was fining down, great for roach, but not good for barbel. Meeting at 6am we tried all the known areas throughout the morning, dropping the method lead in each, yet the only bite came from, almost certainly a chub and this bite was missed as Kevin had taken his eyes of the rod top for a split second.
Moving upstream into a known chub swim bought bites, yet these can be tricky to hit, and l think Kevin finally made contact on the forth attempt, albeit from one of the smaller chub in the stretch. At least it was a fish and Kevin witnessed how quick bites come in a swim after casting out as well as learning a tactic that l know will produce him a few barbel in the future.
Just as we were about to call it a day, we decided to fish the top pool on the stretch. Kevin cast into the centre of the pool, an area l have caught good chub from in the past, whilst l took the tail end, an area that had been fished, but we both agreed looked unlikely to produce. Kevin never had a touch, yet after probably ten seconds l had some interest and although the bite took time to develop, landed my first fish from flowing water of the season, a chub a few ounces shy of 4lb.
Posted by Unknown at 07:10