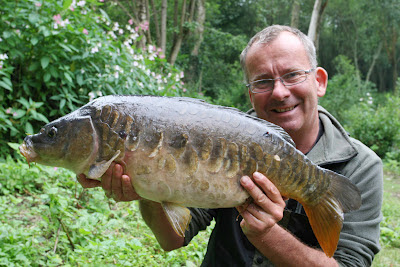 Although l don’t receive as much information as l used to, when news comes through that a water close to my home has been producing some big crucians, and by big l mean in excess of 3lb, l will always follow these up, albeit sometimes not as quickly as l should. 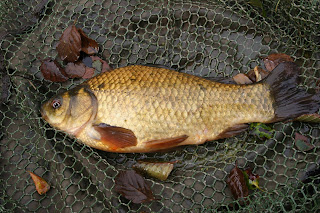 Today’s session was going to be one of those rare occasions when time allows for such an opportunist occasion and with my day ticket purchased l headed to the Hants, West Sussex border with expectations. With crucians in mind l could have taken the float gear but knowing the venue contains loads of quality roach, knew these would be a problem, especially with a bait falling through the water, so opted for a very effective crucian tactic, the method-lead. Having major car problems l managed to scrounge a lift from my dad and after picking up the girlfriend’s father on route we arrived in the early hours and set up along a bank that had been producing.
Tackle for the session consisted of a Korum Neoteric XS Multi Feeder Rod with the 1.5lb tip added, CS4000 Reel loaded with 6lb mainline and on the business end ran a 1.1oz K Grip Inline Lead buffeted by a Quickchange Bead which had a 5lb four-inch hooklink along with a size 16 barbless PR36. Bait was simply either a piece of corn or 8mm S-Pellet that would be hair-rigged along with a good helping of sieved Sonubaits Super Crush Green squeezed around the lead. 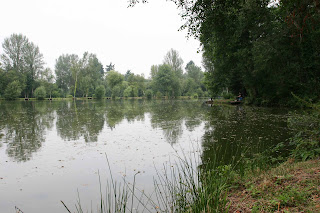 Bites came immediately from quality roach, making the corn almost impossible to use, however the 8mm pellet slowed these down and it wasn’t long before l found myself locked in battle with a big carp. Playing this within the swim probably did me some good, as after she was landed the roach seemed to disappear and other species started to show including tench to around four pound plus my intended quarry. Well not quite my intended quarry as although l would love to say they were crucians, the shape, colour and general appearance bared very little resemblance to a true crucian.
If it was just one of these that l took then l could have said that it was a one off, however a few fell to the three of us, and all looked the same. 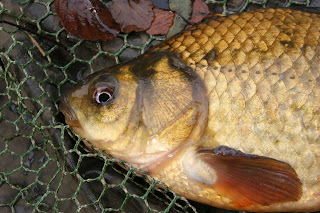 It was a really relaxing morning spent in great company on a really great fishery, and the big carp that came along was a real bonus and proof of what can be taken on balanced tackle. With this fishery knocked of the list as a potential crucian water l headed home, yet on the way stopped of at another mature commercial, this time to check out its perch potential. After a quick chat with the owner, who confirmed that a specimen perch had been netted and returned a few weeks ago, another mental note was placed in the old grey matter, one that l will act on once the cold weather arrives.
Posted by Unknown at 12:46