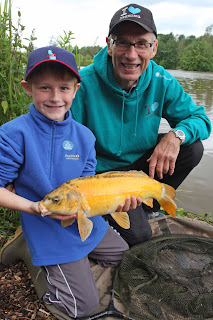 This weekend was a long one. Saturday morning the alarm awoke me at 3.30am and come 4.15am l was in the car heading north to Cudmore Fisheries in Staffordshire. After a journey not far short of 200miles l finally arrived, after a good run, at around 6.30am and set up on Milo Lake where l would be showing anglers of all ages and abilities some of my favourite big fish tactics. The weekend was really all about getting youngsters hooked on fishing and introducing them to Club Korum and with some big names walking around such as Tommy Pickering and Nigel Botherway everything was planned to create a great weekend for them.

I had taken a look on Cudmores website prior to leaving and it stated the lake produced huge bags of chub and barbel and having never fished for either in a stillwater before was looking forward to the experience, especially the chub fishing.

The weather was unsettled on Saturday, yet with fish rolling along our allocated bank l rubbed my hands, imagining a big bag of chub come the end of the day, all caught on one of my favourite methods, the waggler and sprayed maggots. With a gallon at my disposal the pole elastic started stretching yet after three hours not one chub showed, just bream that were feeding two feet down in ten feet of water! The method was abandoned and l set up two rods with the groundbait lead with short hooklinks, identical to the ones l use for crucian carp and swung these out. Although the fishing wasn’t hectic, action came all day from small carp, tench, bream and one barbel, my first from a stillwater. Loads of anglers helped themselves to a run or two and a great day was had by all, including Des Ship and Lee Kerry who were set up next door and demonstrating pole tactics.

Day two l set up in a new swim with open water to cast at and opted for two different methods. The first was the helicopter rig with maggot on the hook, the other the pellet lead with an 8mm S-Pellet on the hook. It was obvious that the fishing was going to be better today as numerous carp, bream and barbel fell mainly to the pellet with more silvers coming to the maggot, including the only chub caught throughout the two days. It was a really great day with no rain for once and with loads of kids passing by and grabbing my rods as the ripped of and landing personal bests, including the best fish of the weekend, a four pound koi landed by Nathan.