Where are the roach?

8th December - So far from a roach, let alone a two-pounder! 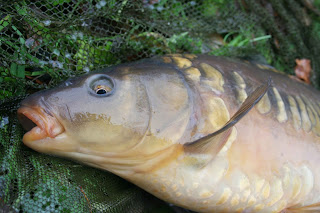 Following up a lead from a friend regarding some specimen roach I found myself on the bank of a small day ticket venue with my dad and girlfriend’s dad. The weather was good, actually it was too good, as soon after casting out a couple of helicopter rigs I found myself bent into an angry carp.

Three hours later fifteen more had graced my net so it was time to move to the larger lake alongside as I was beginning to think that an informational curve ball had to thrown my way! Two hours later and having seen numerous more carp grace my net I was on the move again this time back to the small lake and into a swim that I would normally not target as it was right next to a small stream that saw lots of turbulent water pushing through it and hopefully some specimen roach. After a couple of strange bites I was hoping that a roach or two would show but wrong as the line ripped off the spool once again.

Sometimes you just know that it’s not going to happen and although I stayed as late as I could and scanned the water for any signs of roach, they just didn’t want to oblige. Not sure if I will be going back as my brother fished it a few weeks back when one lake was frozen and the temperature was -7 and guess what he caught, carp. I don’t mind the odd carp gate crashing the party but realistically trying to target these roach is almost impossible and if one does come along its probably more by accident than design. The search continues.

If you want some fantastic winter fishing and have been short of a few bites recently and want some comfortable fishing where long walks aren't required then I have the perfect venue, and you never know a monster roach may turn up if you are lucky.

Email me if you want more details - duncancharman@me.com