Nearly but no cigar, again! 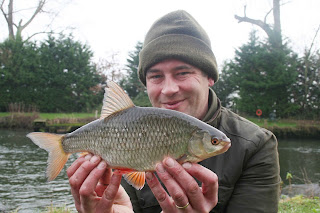 Some will know that once a year I have a customer that treats me to a days fishing on Testwood Pools. The last two years we have come close to catching our target, a two pound roach and a one pound dace, how did this years session go? 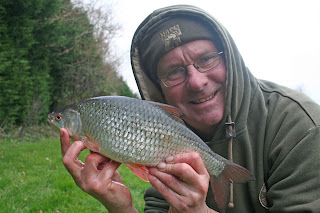 We certainly had the weather when we arrived at Testwood Pools as it was overcast with little wind and very mild, around 12 degrees! Unfortunately the tide wasn't kind as we only had an hour trotting it down before it dropped below the rocks, leaving us fishing a pool that didn't change all day. Fortunately the pool had seen most of the trout removed but in my mind this could work against us catching our quarry, as although most bites come from coarse fish, the competition for food has been removed and the roach and dace can just feed without interference making the amount of feed introduced difficult as too much and they will have a free meal. 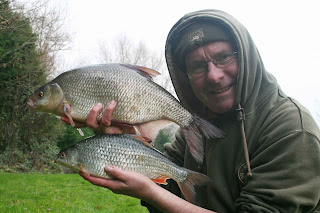 First trot down and a 10oz dace came to the net yet I knew that I was on borrowed time for these and only caught two more all day, both around the same size. Alan hooked what he thought was a big roach soon after starting but this turned out to be a roach/bream hybrid, something that became all too common during our visit. A few more fish came, mainly small grayling before we had to start searching new areas to find where the fish had moved to. Alan managed a roach weighing 1lb 7oz in the main pool but apart from two smaller samples his dream fish, a two-pound river roach eluded him. A switch to the feeder saw more bites coming his way but most were hybrids or trout. I managed to get a few bites long trotting the pool but most were either grayling or trout before switching to the feeder to see if I could find an area that held a few fish which I did. After missing a couple of plucks using bread I switched back to the float using corn as bait and hooked what I thought was a hybrid but as it went in the net could see that it was a big roach, but was it a two? Unfortunately not as it fell a few ounces short, close again but no cigar. A 3lb plus chub had the adrenaline pumping later in the day but apart from hybrids, trout and grayling it seemed that once again it wasn't to be. Their's always next year!

All in all a fantastic day once again in which no fewer than eight different species graced our nets including specimen roach and dace but that fish of a lifetime from Testwood Pools remains elusive to us both, yet Alan did head to a stillwater two days later and catch his third two-pound roach of the winter.
If you want to know how to book this venue then email me - duncancharman@me.com