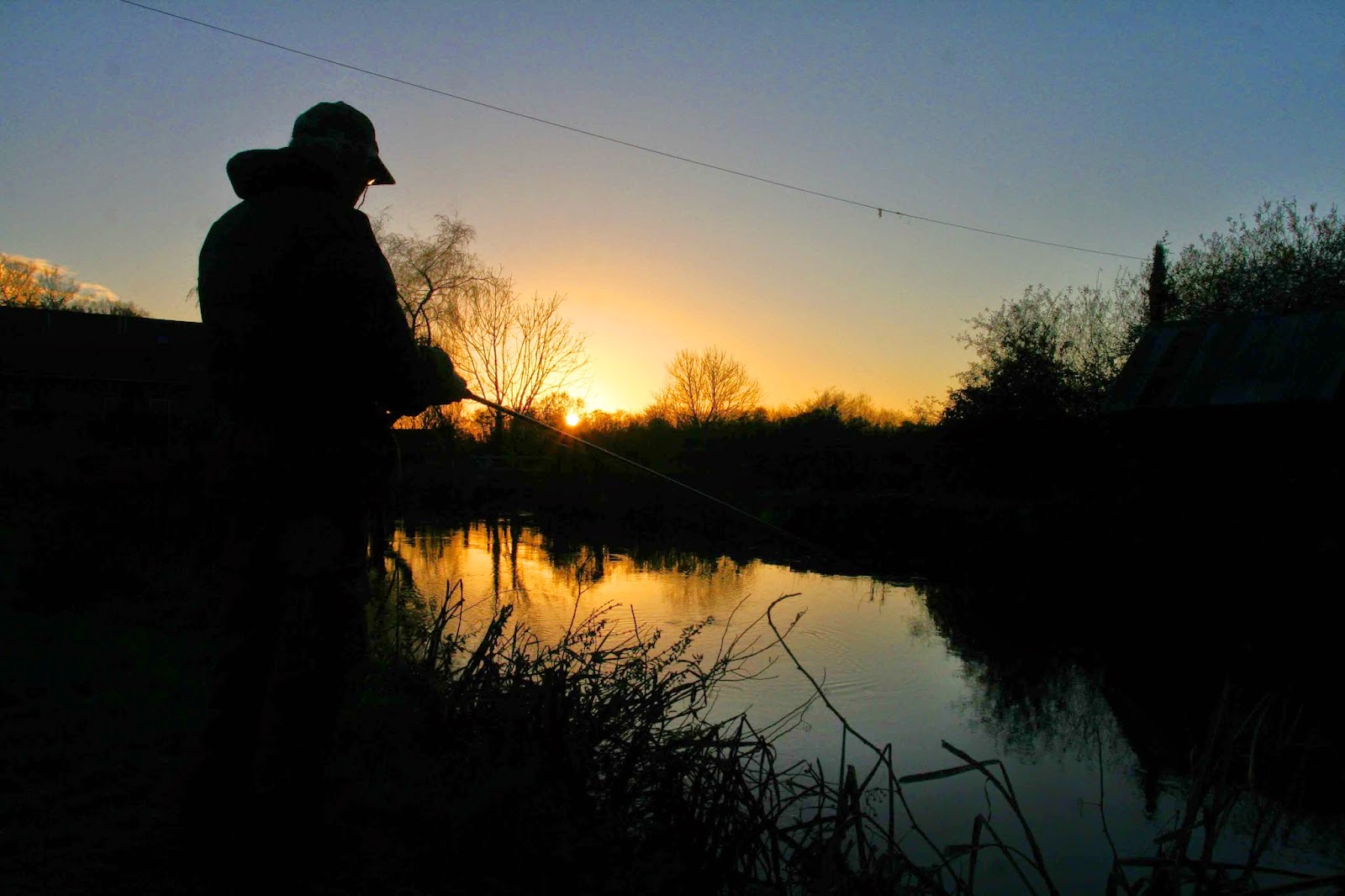 Conditions – An overcast start with occasional shower at midday but eventually giving way to clear skies and a brilliant sunset. Temperature only 4 degrees on arrival and 4 on departure rising to a max of just 7. Atmospherics high at 1026mb and luckily very little wind. River clear fast and dropping.

For one reason or another it’s been a while since myself and good friend Mel had managed to get out together. Mel contacted me a couple of years ago with the view of increasing as many personal best as possible, ones that were at least 50% of the British record. Since our adventures we have managed to complete many of our goals but a couple of species, in particular Catfish and Grayling had always eluded us, so with a window of opportunity presenting itself we grabbed the chance with both hands and headed to the river Test at Nursling. Unfortunately I’m not allowed to guide on this stretch so we both bought a day ticket with the view of exploring the beat along with myself helping Mel to improve his centrepin skills. 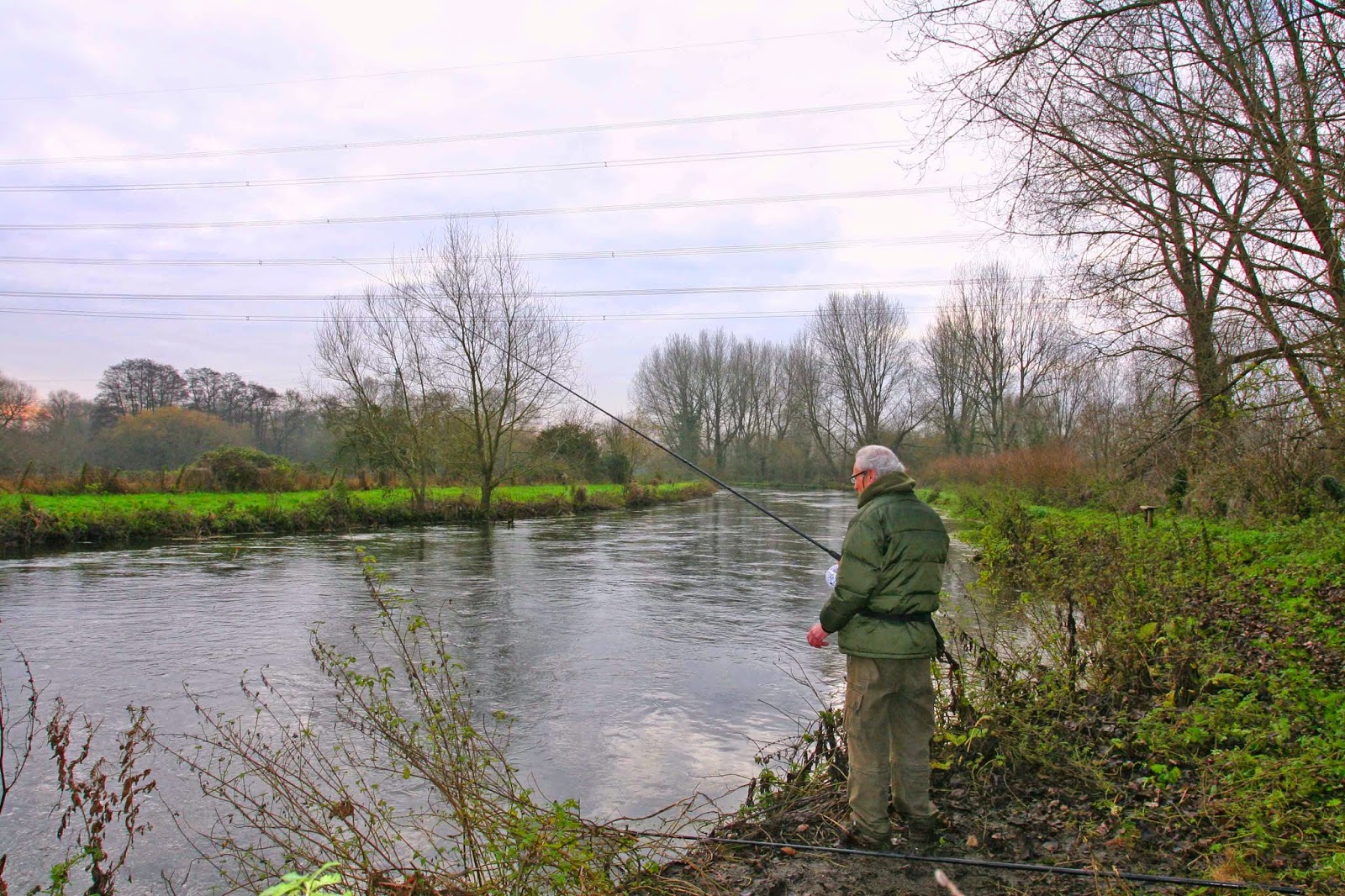 I could have quite easily placed a feeder rod in Mel's hands but to me this isn’t grayling fishing so resisted the easy option and stayed traditional. Maggots and worms are banned here in an attempt to protect the salmon par so it was an all out sweetcorn attack; however a few slices of bread were in the van just in case we thought there was a chance of a big roach. Having never fished this particular stretch before it was an adventure for both of us; however I’m familiar with the beat as friends have fished it in the past and painted a near perfect picture of it.
Nick the river keeper was already next to the river when we arrived and quickly gave us a brief of where the best chance of a two-pounder was, upstream of the pool, something I already knew. We decided to head right to the top of the beat on the left hand bank which extends to just above the M27 bridge and borders the Broadlands Syndicate beat. Above the bridge is very shallow, not the best area for a couple of rusty centrepin anglers and after no action came we headed downstream to a worn swim that screamed fish. 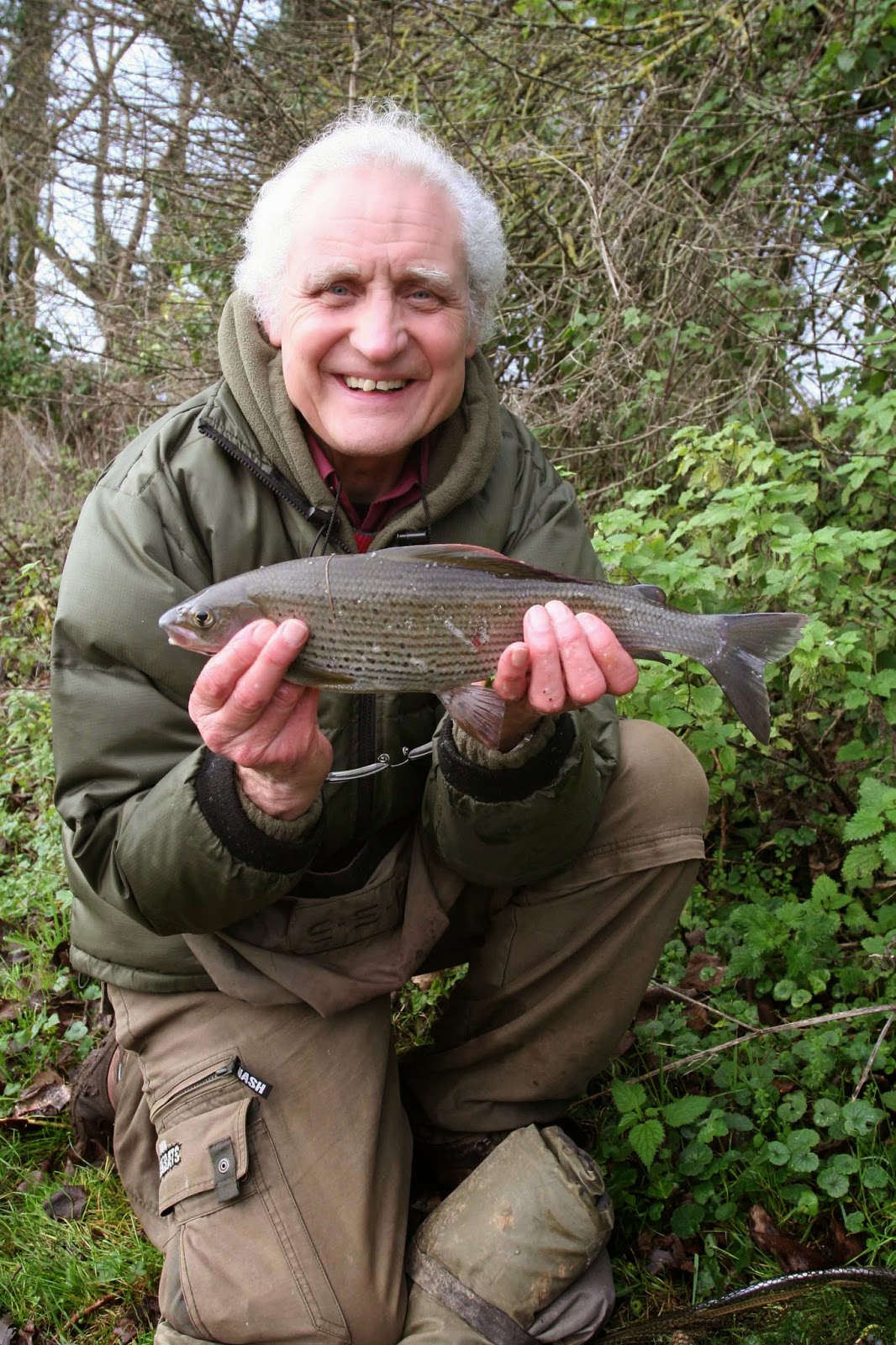 I’d decided to set Mel up with an identical rig as myself, a 4.5g 2.5swan loafer float with a 5lb hooklink and a size 14 Kamasan B525 hook. We were both using 15ft rods, pins with 6lb mainline, basically tackle that I used when I started grayling fishing many years ago which accounted for loads of big fish on the river Itchen. By doing this I knew that if it wasn’t working for me then it wouldn’t be working for Mel, however although the end tackle seemed fine it was our centrepins that were causing us a few problems. I had lost the main screw holding the drum on my Okuma pin a few days before and decided to use a new pin that I reviewed a while back, however I noticed that it didn’t spin as freely as I would have liked and put this down to being new, yet after struggling on for a while soon realised that something was seriously wrong with it, a dud probably! Mel's float was pulling in to the bank and holding back and the problem was soon found as he had spooled up with too much line, an easy mistake to make, and it was this that was bedding in, so with some removed it started to perform better as the day progressed.
Forgetting my fishing I started to feed while Mel trotted down a couple of times and probably on the third trot down and after deepening the float slightly it disappeared and he was into a good fish. I have to apologise to Mel as I probably sent his legs to jelly as I momentarily saw the grayling which looked massive and excitingly gave him a running commentary on taking things easy. In the net the size of the fish dropped somewhat and although a great fish to start the day it didn’t beat our goal of 2lb, in fact it didn’t beat his best of 1lb 12oz. Working our way back to the car Mel caught steadily with plenty of grayling around 12oz along with the occasional bigger one of around 1lb 8oz along with the odd sea, brown and rainbow trout. I managed the odd fish even with a pin that needed a helping hand which included grayling, a couple of sea trout and a chub. 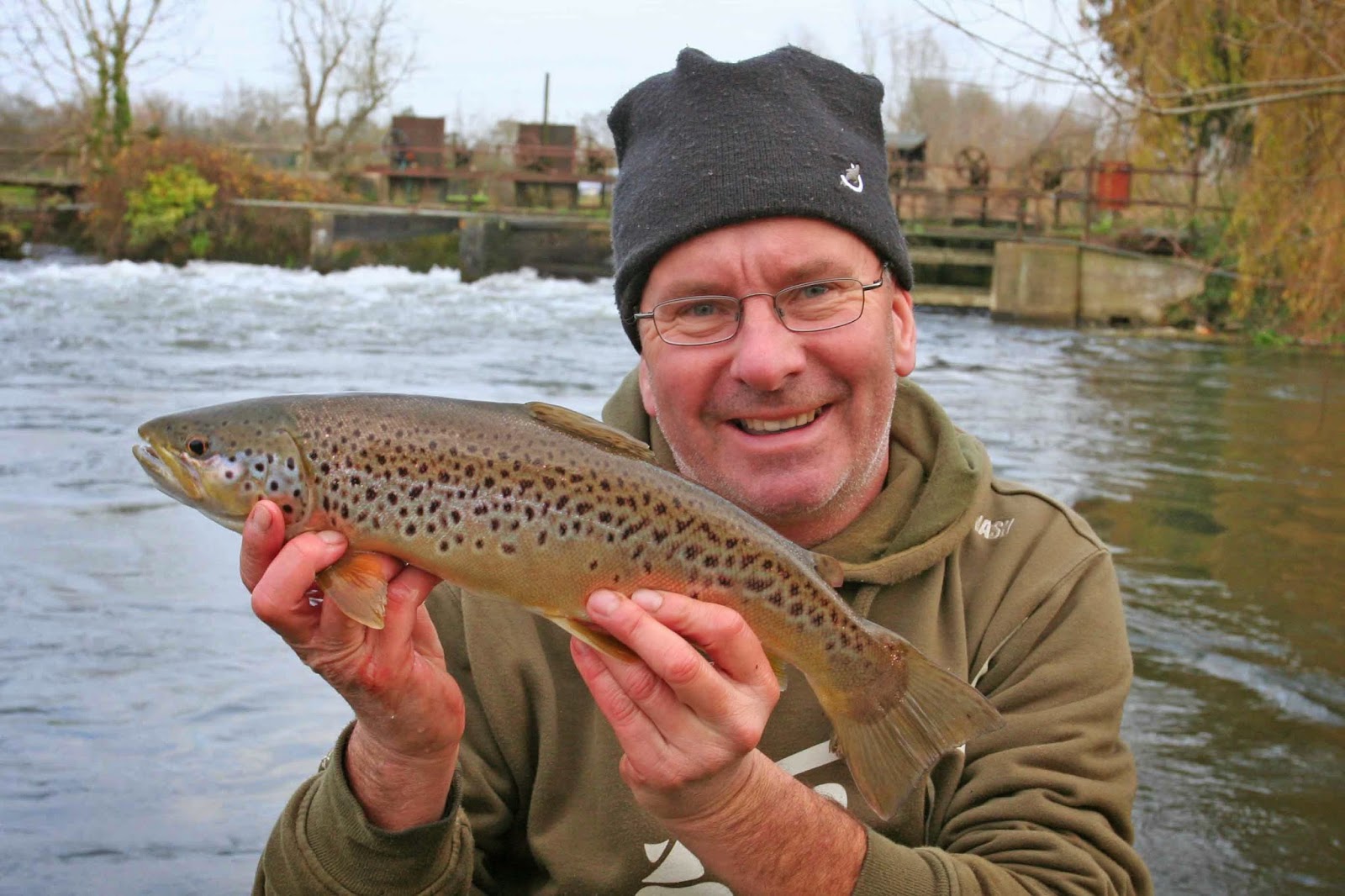 Back at the car we had some lunch before trotting down to the Mill. This produced plenty of trout along with a few better grayling but the star of the show was a twenty-pound plus salmon that sat at out feet in the swim.
Heading upstream on the opposite bank we came across a syndicate member who informed us that the roach were now very scarce as were the dace and that this year there had been a big increase in the numbers of grayling along the beat but these were much smaller than the previous season, great! He was trotting bread down river and was getting beaten up by trout after trout so at least the sweetcorn approach was selective and avoided these to some degree.
Heading back downstream we had to try the whirlpool and once again just caught grayling after grayling but nothing bigger than a pound, great sport but we both would have rather had far less fish but a bigger stamp. Id swapped my pin to a back-up Okuma and was now realising the difference between a good pin and a bad pin and was able to control the float perfectly below the salmon run but all this produced once again was modest grayling. Grayling are very strange, some years the numbers seem well down yet the size of fish is big. I experienced this on the Itchen when one year two anglers could catch nearly a hundred fish in a day but none made two pound, yet the next you would struggle for maybe a dozen grayling but two or three would be two-pound plus! Nursling, as well as the Broadlands beat above is full of grayling this year and without a doubt two and three-pounders are there yet singling these out is going to be very difficult. 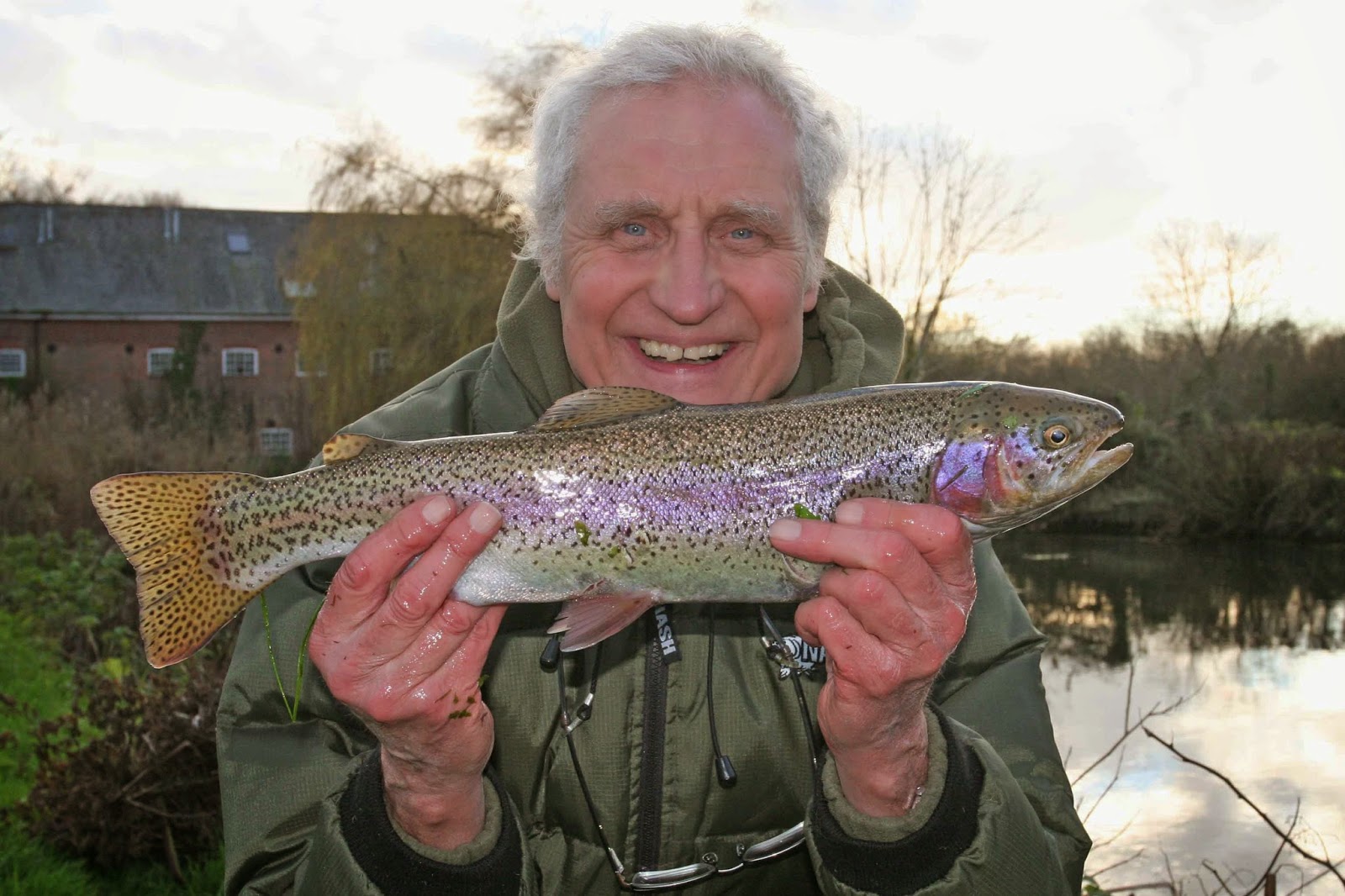 Nursling is a fantastic stretch of river, without a doubt the best piece of the Test I’ve fished. It may come at a cost but it’s so refreshing to know there are still places to go where bites are non-stop and anglers almost nonexistent. After trying a short club stretch of the Loddon last week and working around three other anglers, all of which hadn’t had a bite it was just the tonic I needed and I will certainly make the pilgrimage south to experience the fantastic fishing Nursling has to offer far more often.
As for the two-pound grayling the search goes on but I already have the next venue up my sleeve!

Here are a few words from my good friend Mel –
Hi Duncan,
Thanks again for a most enjoyable day.
The fishery is picturesque and apart from one other angler we had it all to ourselves.
As usual you were totally unselfish in ensuring I had the best possible chance of a PB grayling. We certainly had the numbers so we rally gave it a good go. In addition catching pristine rainbow, brown and sea trout was a real bonus. I am so grateful for your patience in helping me improve my skills with the centre-pin. I feel much more confident, in what is something of an art, as a result.
Seeing a 20lb salmon lying in touching distance under our feet was such a pleasure.
Looking forward to continuing my quest for PB’s with you.
Kindest regards,
Mel.