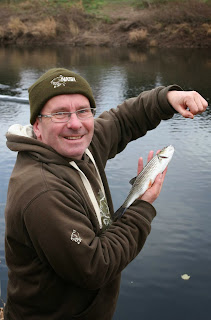 In Session with Duncan

Last year I found myself on the banks of the river Wye in Hereford at the same time that the last day of the Wye Festival Angling Match was coming to a conclusion. I watched as the anglers just upstream of the main road bridge swung in dace and small roach to hand, and then every now and again a big pike would show itself with flaring gills and a wide mouth as it tried to pinch one of the hook. I managed to make a few casts at the end of the match, yet the light was fading and as much as I thought that getting a take from one of these hungry monsters was inevitable, it failed to happen.
Myself and angling companion Chris made a decision to return the following year as soon as the predator season opened, October 1st yet the un-seasonal autumn had yet to see the pikes annual pilgrimage to the deeper waters of the town stretch and our timing somewhat premature. 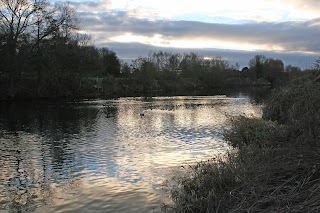 Undeterred we decided to return, somewhat later than had planned and with Paul at Woodies tackle shop confirming that a few pike had arrived we headed back for a day session. With my van being somewhat unreliable Chris arrived in the early hours, 4.45am to be precise and a good run to Hereford saw us arriving just after 7am. After unloading the gear, and with Chris parking the car I found myself watching the water as the first rays of light started to illuminate this magical river and whilst doing so a couple of good fish moved, yet were they pike. Unfortunately not as soon after a salmon leaped clear of the water.
Heading downstream we decided to start at the first swims upstream of the main road bridge then if nothing happened move half way up the lawn section finally finishing of just downstream of the old railway bridge. That was the plan anyway, however as dawn arrived the river came alive in front of us, not just loads of silver fish but pike as well chasing these in all directions. Once again it seemed that this was to be an easy challenge yet with Hereford and District AA banning the use of natural fish, live or dead trying to get a pike to slip up and take a sea bait was like winning the lottery. 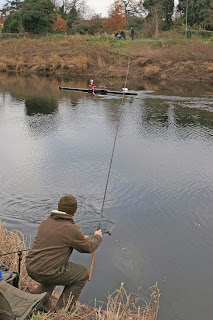 Fortunately I had bought a float rod as this section can produce not just big pike but large roach, dace, chub and perch and my hope was that maybe I could work the swim, get a few silver fish going and maybe just be fortunate to have a pike grab the bait and after a long fight land a monster pike. It was a long shot but far more likely than getting one to take a sardine! Having so many fish on the surface I started on a 6x4 stick with the shooting shirt button style and setting a depth of 3ft. I wasn’t quite sure of how deep it was just a rod length out but later plumbed it at around 12ft! Swinging the stick float out along with a few maggots it only travelled a few yards before disappearing and expecting a small dace or bleak to have grabbed the maggot was somewhat surprised when I found myself attached to a chub, not massive, around 10oz. This was followed by half a dozen more before they disappeared, however with the odd good fish rolling in the centre of the river I decided to change to a loaded waggler. Locking the bulk of the shot around the Drennan 2.5gram Loaded Insert Crystal +1BB Waggler and leaving just one small number 8 dropper shot I set the float at 3ft, placed a couple of maggots onto a size 16 Kamasan B525 before catapulted some maggots to the centre of the river and made my first cast. Almost immediately the float was gone and the bend in the rod showed that another chub was hooked, this time around 1lb 8oz. For the next couple of hours the action was hectic and come 11am when the shoal moved downstream I must have taken another thirty or more.
Chris was by now scratching his head having tried every presentation possible, I had even popped up a sardine some four foot of the bottom right next to a small bush downstream. I could see the bait easily and time after time a pike would explode above it making me reach for the rod yet every time it was a natural it took. A couple of pike anglers were even working the far bank with big plugs, but even this tactic wasn’t fooling the pike.

Probably two hours passed before small fish started to show again in front so having just a couple of hours of daylight left it was back to the waggler and come the end of the day a further forty chub had graced my net, all between 8oz and 2lb along with a few quality dace and annoying bleak. My only disappointment was that I hadn’t taken a keepnet as a catch like this would have made a fantastic front cover shot for Anglers Mail.

I have to say that I have been missing fishing the float, yet after last weeks trip to the Test and a short session on the Itchen along with this phenomenal session in which over 50lb of chub came I have to say I’m not missing it anymore, I’m loving it.
Posted by Unknown at 03:56