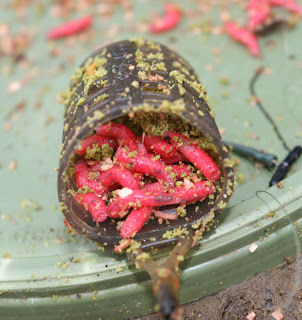 'In Session' with Duncan

Anyone that’s fished the Helicopter rig at Badshot Lea Big Pond in early spring will know just how good this method is and the exceptional fishing that can be had. I fished this with fellow Nash angler Stuart Jupp back in April and that day fishing around fifty yards out from the swim that allows the centre of the lake to be reached at the end of the woods (not the one facing the island) he managed around 80lb of fish in just a few hours. It was his first ever session on the venue and the first time he had used the rig in such a delicate fashion yet with numerous bream, mostly around 4lb along with big hybrids, tench and the odd net perch he proved that with a little help anyone can bag up on this method and venue.

Knowing the venue well and the variety of species it holds should mean it’s a good winter water so with this in mind I headed out knowing that I needed to get swim choice spot on. Unfortunately the weather was doing its best to limit my choice as a storm was brewing and with weather warnings across the south I knew that my session would have to be cut short due to sensibility kicking in! On arrival the wind was coming from the main car park and heading across the lake to the small pond, a south westerly. The temperature was just seven on arrival and on the increase, as were the storm clouds and wind. Even before arriving I knew that the fish in this lake follow the wind so the area to the right of both pins was my chosen area and the centre of the lake was where I needed to place my bait, however trying to fish with such a wind in my face or from the side wasn’t an option so with peg 57 free and with the wind coming from behind this swim was the obvious answer as well as offering some shelter.
Tactics as mentioned earlier was the helicopter rig in conjunction with a groundbait feeder. Red maggots would be squashed within the feeder by placing groundbait to both ends, creating what’s known as a maggot sandwich and with two red maggots placed on a size 16 hook and the use of a three inch hooklink any fish that picked this up would almost certainly get hooked. 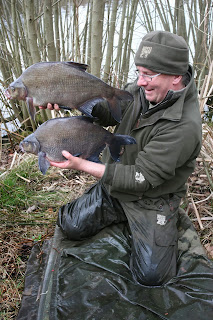 The first item that needed sorting was the umbrella as the rain had arrived slightly earlier than forecasted. Having mixed the groundbait up the night before, wetted down and sieved, and with rods made up it was simply a case of filling the feeder and punching this out in the general direction of the island some sixty yards, something made easy by the strength of the wind. With both rods out it was a case of working the swim as best I could in such conditions so every fifteen minutes the feeders were refilled and cast back out to the same spot as by now elasticised stop knots had been tied to the mainline and the reels line clip used.
Forty five minutes past, three casts, before a couple of bleeps showed that fish were around yet it was another forty five minutes before the left hand indicator pulled tight before dropping to the ground resulting in a bream around 5lb. Over the next three hours four more similar sized bream graced my net, yet come 1pm it was a case of gritting my teeth, packing up in torrential rain and gale force winds and heading for shelter, yet this short exploratory session provided everything that I wanted of it.

Badshot Lea is a brilliant early spring venue, however with a little thought and dedication its also a great winter water, I just wished that the conditions had allowed me to fish a whole day, however with the banks deserted it wont be long before l return.


Unfortunately due to the adverse weather and holiday period I cant see myself getting out before the New Year, well not to create a weekly ‘In Session’ blog report, so to all my customers and readers have a great Christmas and here’s to a rod bending New Year.