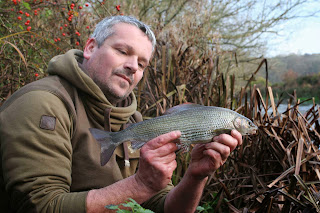 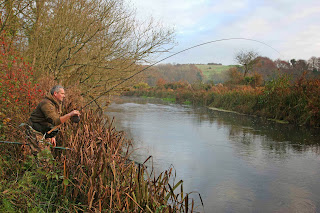 Any month that sees a personal best fish landed has to be classified as a red-letter month and December has certainly made up for the two previous months being almost non-starters.
Fortunately the first session really got the month of in fine fettle and luckily I was treated to a days fishing on the famous Testwood Fishery by a very generous customer of mine. Our target was to catch the pinnacle of all our coarse river species, a 2lb roach and although we never achieved this goal, we came bloody close with myself taking five quality roach, all on the stick and pin, with the best going 1lb 13oz. It wasn’t just roach that showed, seven other species were taken including brown/sea trout, grayling, roach/bream hybrids, bronze bream, chub and one massive dace of 11oz that gave me a new personal best. For me the most pleasing part of the session was that I stuck with the float rod, stick float and centrepin all day and although come the end of the day cramp was setting in it was the most rewarding session I’ve had for a very long time.
Booking the pool doesn’t come cheap at £150 but the cost can be divided up between a maximum of three anglers so it is affordable and will probably see a once yearly pilgrimage by myself and Alan to the venue.
Unfortunately the second trip of the month bought me back to ground as although it wasn’t a blank it felt like it as I headed to a day ticket venue with big roach on my mind yet come the end of the day which saw my father and girlfriends father fish as well, apart from two roach around a pound to Mick all myself and dad had to show for our efforts were small frustrating roach. Anyway, just like Old Bury Hill it’s another venue that can be ticked of the list for the rest of the season. 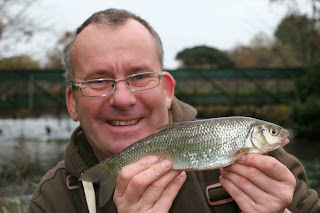 Back in November myself and fishing companion Chris had walked a stretch of the river Itchen and had spotted a big grayling and with a free Sunday morning we headed south full of anticipation. Before starting to fish I said that if we had half a dozen fish each the session could be classified as a result. Well in the second swim I settled I managed eighteen net fish mainly grayling and trout with the odd salmon parr thrown in. Chris was catching far less fish but seemed to have a knack of putting the net under far bigger fish with the best grayling going a good pound and a half plus. Just as we were rubbing our hands together thinking we had uncovered a gold mine and jogger on the far bank stopped and informed us that we were on a private, exclusive trout beat, ouch, that hurt. Amazingly we had walked the stretch the previous week and with our eyes concentrating on the water had both totally missed the private fishing sign. Time to leave I think!
A trip to Hereford and the river Wye although not producing our desired species, pike, did provide me with a 50lb plus bag of chub. Not big fish, between 8oz and 2lb but brilliant sport and again all taken on the float, this time the waggler fished up in the water down the centre of the river.
A couple of guiding days saw fish landed, the best fish being a 4lb 2oz chub taken from the Loddon in far from ideal conditions. The perch didn’t want to play ball and proved difficult on both flowing and still water. 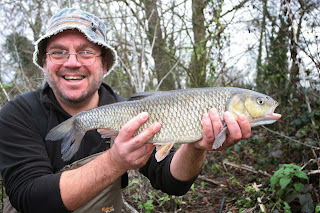 I did try for barbel on a flooded river Loddon, again without any success mainly due to the session being cut short due to the river rising and knowing that a stream that I struggled to get over on route to the river would most likely cut me off if I didn’t make a premature retreat. To be honest with the weather as it is, consistently mild and the rivers up in flood I’ve forgotten about barbel as these conditions allow the fish to feed when ever they want and trying to get any consistent results is almost impossible. In fact I’ve just taken a picture of my back garden, its Christmas Eve and the river Blackwater is within inches of breaching my tackle shed. It’s the highest I have ever seen the river, maybe I should cast out a barbel bait and leave my receiver in the lounge!

Checking my diary inputs I’ve been fortunate to get out on the bank on twelve occasions, these being split between personal sessions (8), features (1) and guiding (3) which again is a good split. These sessions total 67 hours, almost six hours per session which is acceptable knowing that each day only sees around eight hours of daylight.

On a more positive note I have been fortunate to discover and catch a few specimen fish come the end of the month, yet as its early days and with the Christmas holidays stopping myself from getting out till the New Year I feel it best to keep these quiet for now, but just lets say December has been very kind! I may well get out and have pencilled in a session on Friday 27th as well as a customer promising to take me out sea fishing on Monday 30th, yet with storms forecasted I’m not holding my breath.

Have a great Christmas and New Year!