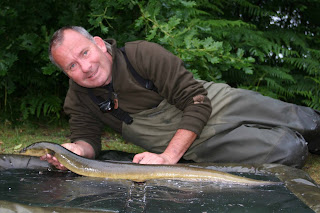 The week started with a visit to a new day ticket water, basically because the ladies had planned a Pimms party so us lads had to make ourselves scarce. We wanted to try a carp water but arriving around midday found a few other anglers fishing and all the carp cruising on the surface so headed to an old trout lake that reputedly held carp to 28lb and perch to 6lb. In short the fishing would have been tough if it wasn’t for the rainbows and browns that constantly grabbed our meat and corn offering along with the occasional small carp.
Sunday, as always is about visiting the family and taking the girlfriends parents dog for a walk or should that be swim. This time we went to Wagners Wells a classic old ex-trout water, steeped in history and I watched as a few original lenney carp gracefully sunned themselves. In the evening I managed to get my monthly blog written up which freed a few hours up Monday morning for a round of golf.

Come midday it was time to start organising for the first of the FAS barbel teach-ins on the river Loddon. On route to the river Loddon I popped into Yateley Angling for a couple of items before arriving early. Only five of the booked in eight anglers showed, which is a little disappointing, however the remaining five were a great bunch of guys and were able to move around more than expected. As always a few anglers arrived without reading the car park sign or their handbook which is somewhat annoying as I hate having to ask people to leave, yet it has to be done. After going through rigs, bait, general tackle required and answering a few questions we headed to the river where I gave them a guided tour pointing out all the good swims, before they picked numbers and walked of to their chosen swim. It wasn’t long before the phone rang with Mike well down stream landing a barbel of around 5lb. Barrie at the upstream end then called as he had just landed his first ever barbel weighing 6lb 8oz. Things then went quiet as expected with the odd chub bite being missed. As darkness fell I called it a day, yet not before seeing Barrie loose a big fish that found a snag, in fact that was the second one he lost as earlier he suffered a hook pull. Driving home a couple of messages came in, both from Mike who went on to land two more barbel, estimated at around 11lb! Hopefully he will send me a picture. Surprisingly the fish that were caught came from swims that I wouldn’t have bet on with the banker swims failing to produce, but that’s fishing! Hopefully the guys learnt enough to return and land a few for themselves and I have to say a big thank you to them for making it such a great evening as well as helping each other out after I left. Cheers guys!

A quick visit to the dentist to rebuild my front teeth on Tuesday was well overdue and back at home the morning was spent sending images from the barbel teach-in to anglers and FAS as well as writing up blogs etc before sorting the eel tackle out. With the weather turning wet and windy thoughts were entirely on eels and with a few deadbaits in the freezer I headed for a lake that although hard had produced a few in the past. Chris was joining me and on finding the lake busy found ourselves split up; however it was never going to be a social night as at dusk the rain started and continued until the early hours. At around midnight the roll over indicator started to move and with line peeling of the open bail arm there was only one culprit, an eel weighing maybe 3lb 8oz. Another shortly after was missed which could well of been a big liner as some fish had started to spawn in the nearby weed. Chris failed to catch, yet an eel on a difficult lake was well rewarding and just the potion needed to get the bug again.
Wednesday was all about sorting out my other job, weddings as I have a number coming up and need to get on top of albums etc and with the girlfriend coming over in the evening all things fishing had to be forgotten.

Thursday was the start of the Thames carp campaign and the morning was taken up making rods up etc. Chris got round at midday so it was an early start, more to get into a swim that had been very productive in the past, albeit a few years ago. It wasn’t anglers that would tie up the swim but mooring boats as this was a free 24hr mooring zone and once the locks closed early evening these would be franticly heading for this area. Luckily it seems that there are far fewer boats navigating the river this year and although boats were around the swim was free. The weather was warm and it was a long wait for the sun to go down behind the trees and the shadow to fall on the water and with rods out and baiting done it was now all down to the carp, if they were around we would soon find out during the hours of darkness. All rods were baited with snowman rigs, another very successful past presentation, 20mm/15mm Nash Monster Squid boilies with small PVA bags of pellet boilies attached. Before casting out we had spombed out six kilos of 12mm pellets, old ones that needed using up in the bait shed along with two kilos of boilies. Bream started to show a couple of hours before darkness and with one hanging itself on my rods before dusk we had visions of being up all night, but it wasn’t to be, the bigger baits did their job and come dawn just one more bream and a chub had fallen, a rather spawned out one that would have been a big fish in its prime. Dawn saw a flurry of bites, all from bream and as the morning progressed thoughts of a Thames carp vanished and by 8am it was time to call it a day. I took Chris for a quick recce to a couple of other swims on another stretch, one that will be fished on Monday night as well as baiting our original position as its past form just cant be ignored. Back at home I worked around watching the Tennis as well as sorting out the big guns for a demonstration on fishing the method at distance at Broadlands on the weekends Nash Roadshow.