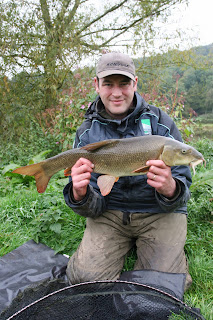 Monday morning dawned damp in the Herefordshire countryside. The river Wye was my destination for the rest of the week and soon after arriving at Sink Green Farm at 7am, l met up with Alan and Barry, my customers for the day. Barry took the banker swim in the morning with Alan roving the main river until 2pm when they would swap over. The river was up around a foot from the last time and although this made fishing the salmon croy a non starter, most of the other swims seemed far more accessible. It was also carrying some colour from the weekend’s rain, not a bad thing. Roving around the second field Alan found the fishing tough but still managed a couple of good barbel along with two chub. Barry was faring better in the banker swim taking three barbel plus a few chub. Swapping over at 2pm it didn’t take long to see that the banker swim was fishing far better in the afternoon as Alan found himself constantly bent into barbel and chub, the best barbel weighing 9lb 6oz. I think Barry was secretly fishing for chub as come the end of the day he had caught nine along with another barbel.