Predator season of to a flying start

As soon as October arrives my thoughts turn to Zander at Old Bury Hill. These fish seem to be well up for it, making the most of the new influx of freely available food from us anglers as well as knowing they need to build up their reserves before the winter arrives.
My first outing was delayed due to a week on the river Wye where over fifty barbel were taken by my customers, not quite as good as Septembers tally, but the average size of the fish was noticeable bigger. 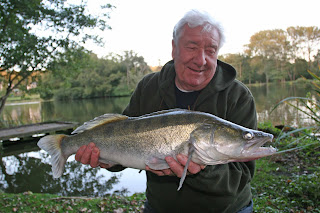 My dad and brother jumped at the chance of joining me as they knew that they had the privilege of angling for a few hours into darkness. Arriving at 4pm we headed up the long bank, an area that produces not just big fish but plenty of them in the autumn.
Although l had managed to get some sardines on route, they weren’t frozen (it’s a long story, but dad was on bait buying duties and had bought sprats not sardine) so l decided to keep these for a later session, using a bait that although productive, does seem to have its good and bad day compared to sardine that’s always good. It wasn’t long before the rods were out and straight away the bleeps, lifts and falls of the indicator arrived, however it took some time for the first positive bite to arrive and it was to dad. You don’t need heavy powerful rods with zander, 1.5lb T/C rods are more than enough and put a big zander on balanced tackle like this and it’s a joy. Weighing 7lb 7oz it was a great start. From then on it was steady action all the way and come 9pm when we called it a day dad had given us a right stuffing. Kevin had also taken his fair share, along with the biggest which went 9lb 6oz however for me l had the torment of being called the ‘pest controller’ for the night with zeds to around 5lb. 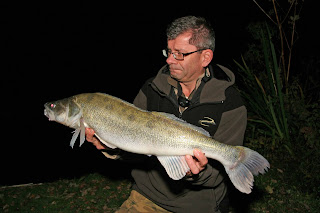 I’m going to be keeping a close eye on the weather over the next few weeks and as soon as the atmospherics drop then l will be grabbing the opportunity to enjoy predator fishing with a difference.

If you would like to enjoy fishing this fantastic experience then l am offering guided zander days to Old Bury Hill. Just send me an email or give me, but remember as it gets colder it gets harder so the sooner the better! Mobile – 07928 617006.
Posted by Unknown at 03:19