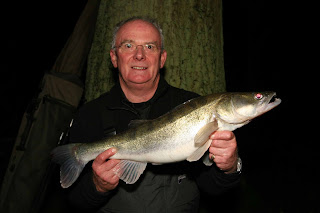 The past weeks weather has been unseasonably warm and just last night l was packing up at 11pm after a zander session at Old Bury Hill in temperatures reaching the mid teens! Some may think that this weather is great for angling but in my mind, its rubbish, as whatever species you are targeting can feed literally when it wants too, throughout a 24hr period and if you just happen to be angling when the switch is hit, great, but for most, were probably nowhere near the waters edge. Consistent white cloud is never good and although some may think that the atmospherics are good, well, their not, around 25 millibars higher than what l would consider ideal.
Last week l tried for crucian carp, fishing the same area as last October. Then we were often catching a dozen of them, many of which were high three’s but this year its different as these seem to be spread out all over the lake, not yet shoaled up, and getting more than one in an evening is good. 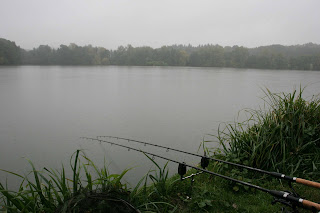 The zander at Old Bury Hill also have yet to shoal and most anglers are catching the odd fish, yet big hits are few and far between as are big fish. My latest session was guiding a regular who catches his fair share of fish. We have an understanding that l can fish whilst guiding and not for the first time my results were somewhat lagging behind his. Starting along the grass bank we both had caught three zeds come darkness, yet as the head torches were needed the action ceased. Come 7.30pm Martin asked what l would do if l was on my own and l replied move, so we did. My thoughts are that its so easy to stay put, yet even if l do move and still go home with little to show for my efforts, l still have the comforting thought that, at least l tried. Twenty minutes after the decision was made we were settled half way up the long bank and just ten minutes after casting out Martin got a run. The swims we were fishing were the same as last week, so it was the third time in them. On the first two occasions l had noticed that most runs were coming in one particular swim, so had put Martin in this. Three more runs came Martins way by 11pm but for me fishing identical rigs and bait just a few yards away bought just two bleeps. This just goes to show that although most swims look and feel almost identical, some do hold something that the fish like.
Posted by Unknown at 03:27