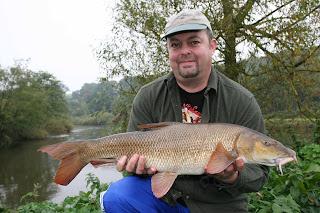 On Wednesday l had a lie in as Adrian, my customer for the next two days wasn’t expecting to arrive till midday. This gave me some time to tidy the tackle up along with catching up on some paperwork. I gave Adrian the choice between targeting pike or barbel, and although the thought of a big river pike was tempting he took the barbel route. With other anglers on the beat we dropped into three swims, managing to catch from each which included two chub and a barbel. Adrian’s friend Andy was to join us for the following days fishing and after a big English breakfast we headed to the river, once again in rain. Andy dropped into the banker swim and took three barbel to nearly eight pounds whilst Adrian managed one from the main river. There were other anglers fishing and the news was that most were struggling so the guys weren’t to disappointed knowing that the river was just not fishing well. All week the water level and temperature had been dropping and although the swims contained fish, it seemed that they were waiting for the river condition to improve to feed. The two anglers swapped swim early afternoon, yet it was obvious that things would be tough, yet both anglers landed another barbel each before the forecasted heavy rain arrived at 5pm.
Posted by Unknown at 02:07