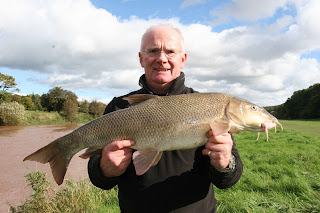 Thursday evening the rains arrived and although l slept through it, l knew the river was high and coloured as l could spot it from the bathroom window. The news reported that there was some serious flooding in Cornwall and my two anglers that arrived at dawn both reported plenty of standing water on the roads. Making our way to the river l was pleased to see that the river just a little higher than the previous day, yet it was the colour that worried me as obviously the river Lugg had risen and was pouring its usual red coloured water into the Wye. Steve set up in the banker swim, whilst Martin headed upstream and my worries on if the river had too much colour in was soon forgotten as both anglers found themselves bent into barbel on their first casts. Come 11am both anglers had taken around ten barbel each, mostly good fish in the seven to eight pound barrier, yet the river had risen a couple of feet by now and Martin was struggling to keep four ounces of lead in the river. We agreed that it was best for both anglers to set up for the afternoon in the banker swim, one that actually gets easier to fish in high water as it creates an eddy. The barbel had certainly gone on a feeding spree early on and although sport slowed in the afternoon the anglers still managed another four each, the best 9lb 2oz, bringing the total for the day to a staggering twenty eight. 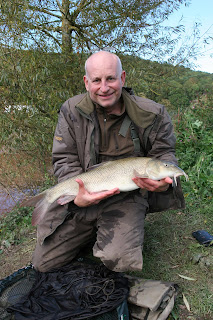 With the week coming to an end it has to be considered another outstanding success with a staggering fifty six barbel landed. Its also a typical example of just how different two days can be, and l feel for Adrian who unfortunately found himself on the river when the barbel were just difficult to tempt, yet he still managed a couple. I also now realise just how brilliant barbel are at finding your bait as on the last day, eyesight didn’t play one part in them locating there dinner. I for one will never be concerned at fishing a river that’s high and coloured, in fact l look forward to the next day the Loddon or Kennet is in flood. 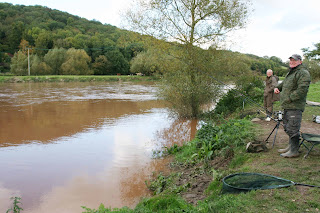 I have already provisionally booked two weeks next year, one in September and one in October, with thoughts of another in November. The week in September will be mostly a barbel week, yet with an angler catching two twenty five pound pike on another stretch of the Wye this week and a match being won with 59lb of dace l am going to be exploring the river this winter for these species so l can offer some diversity to next years fishing.

If you are interested in spending a day, or more, exploring this fantastic river for barbel, dace or pike then get in touch now.

Here are a few words that l received from one of the anglers that joined me this week –
Hi Duncan
I just wanted to thank you for a cracking days fishing on Tuesday, my wife was so pleased when I thanked her for such as fantastic birthday present.
Having had time to reflect on it over the last few days I want to outline what was so good about the trip.
I thought that the venue that you'd secured for us was fantastic especially the fact that we had the opportunity to fish both the main flow and the banker swim. As you know from our previous Loddon trip my river fishing hasn't been that productive over the years, therefore it was great to learn how to read the main flow, and how to go about fishing the glides etc, and it was so rewarding to have a Barbel in the net within 20 mins of my first cast. Yet another thing I took away was not being frightened to move swims, and on reflection I will apply a roving style to all future fishing. The banker swim itself was a joy to fish, and although I kicked myself when that fish snagged me in front of an audience, i was chuffed to bits having listened to you and slackened right off that it swam out, and that I could actually see the line moving and feel the fish too. This is something that i've read about but never experienced myself as an angler. I've never had the confidence to use micro barbed hooks (I always use barbless), yet the above snagging incident combined with successfully unhooking all the fish I caught in the whirly pool, including one that was wedged really tight in the corner of a fish's mouth, has boosted my confidence mate.
As per my previous trip to the Loddon, it was great to be guided by someone who has amassed so much knowledge and experience, has endless patience and enthusiasm, and thoroughly puts themselves out for their customer. Even when they go and tie their own version of the Wye rig against better advice :-)
Posted by Unknown at 02:02