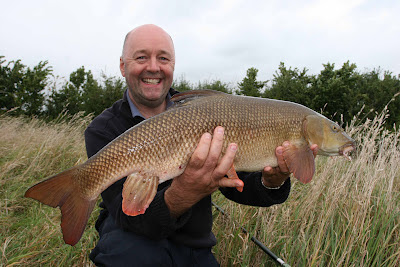 You may remember a blog on my website last year called ‘The Naked Guide’, well it was Craig and Dave’s once a years treat to join me for two days on the river Loddon. Last year l had given most of my time to Dave who went on to land his first ever barbel which turned out to be a double, so with the task in hand set to try and match this we headed to the river full of expectation. 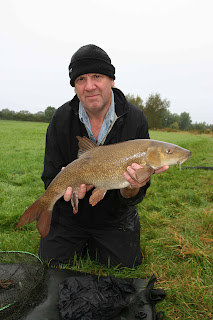 Day one started in style with Dave landing a barbel of 7lb 13oz after just a few minutes, yet l had put Craig in a very difficult swim know as the ‘Jungle’ and whilst taking a few photos for Dave, he had hooked a barbel that unfortunately found a snag and shed the hook. The same swim, an hour later produced another bite for Craig yet this time a much slower barbel headed upstream only to shed the hook somehow. Craig seemed happy that he had received an adrenaline rush twice, yet as a guide l felt gutted. Returning to the swim later Craig amazingly received another bite, yet this time it came from a chub weighing 4lb 12oz, at least we were of the mark. The morning clouds dispersed and the sun came out and with this the bites seem to dry up. Apart from the odd chub bite which the guys missed, we finished the day knowing that it could have been a red-letter day, however we still with another day ahead of us.

The following day dawned bright and finding an angler within the banker barbel swim our feeling of an early result disappeared. Both anglers received signs of fish, yet the three foot twitch failed to materialise. Heading upstream for lunch the guys dropped into a productive chub swim and managed a couple of four pounders along with a smaller sample which rekindled our hopes of an afternoon catch.
Having covered the stretch we decided to head to a much harder part of the river. It was a gamble but l had a barbel swim in mind where, if Craig received a bite, it could come from a real specimen. Knowing the river Dave roved a few swims, but failed to catch, yet after a long walk Craig and myself finally found us settled within the swim. It didn’t take long for a chub to show its presence, yet Craig ignored all the taps in the hope a barbel would barge it out of the way, yet it wasn’t to be and after forty minutes a 4lb 4oz chub hooked itself. It was now make or break time and l decided to drop a few handfuls of pellet into the swim and rest it for thirty minutes. Retuning later Craig swung his rig into position and we sat back watching the tip in the hope a fish would show its presence, this it did with a liner after just five minutes. Its amazing how after watching the tip like a hawk all day, the moment you take you’re eyes of it, the bite you have been waiting for comes and it was one of these occasions again. The movement bought Craig back to his senses and managed to grab the rod that would have been river bound if not secured at the butt end by a gripper style rest. With the clutch screaming and Craig shaking the barbel headed downstream at a pace that was characteristic of a big fish and when it surfaced l knew it was what he had come for. Finally in the net l hosted her onto the mat and weighed her at 12lb 1oz before Craig secured her in the margins and l headed downstream to find Dave. 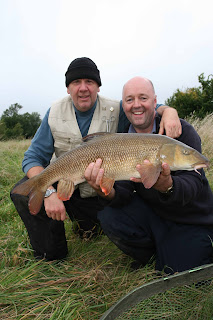 It was the perfect end to two days on this fantastic river and a fish that Craig will remember for a very long time.
Well done guys!